"All of the souls you will reap. All of your spoils of war. To be a keeper of the Forge. But a trifle price for the boon that is bestowed upon you."

A Soul Grinder is a massive Daemon Engine of Chaos, a diabolic fusion of daemon and gigantic war machine fuelled by dark malevolence and its own irrepressible desire to destroy.

Dwarfing even some of the mighty Greater Daemons in stature, these ironclad behemoths are nigh unstoppable -- great metallic juggernauts whose many limbs are armed with piston-powered claws and daemonic weapons.

Those that dare stand against them are swatted aside like bothersome insects or crushed into an unrecognisable pulp.

Xenos monstrosities caught within a Soul Grinder's steely grip are ripped in half and enemy tanks are crushed as if they were made of rotten wood.

According to legend, all Soul Grinders are created within the limbo realm known as the Forge of Souls, located within the Realm of Chaos in the Warp. Whilst a Daemon can never be truly destroyed, its essence can languish for countless Terran centuries before reforming. Such a non-existence is intolerable to Daemons, and one that they take great efforts to circumvent.

The most common schemes involve sacrificing a number of mortal souls in exchange for a new corporeal body. Those Daemons that have a sufficient tally of the dead to their name thus avoid the purgatory of the Forge, but the soul-price is invariably great. Occasionally, however, the Forge of Souls will offer a desperate Daemon a boon of sorts, promising to craft for it a body capable of great destruction.

Daemons who are able to pay this price are offered a new corporeal body, a Soul Grinder built out of the remains of wrecked possessed war machines and once great Daemon Engines lost to the fires of war. This boon comes at a cost, of course; the price the Forge asks can range from a mere handful of slain mortals to countless thousands of souls; the repayment required is never the same for two different Daemons.

If the bargain is agreed upon, the Daemon surrenders its True Name to the Forge, and speaks the three Oaths of the Iron Pact. With the dark pact sealed, the Daemon's essence is fused into a Warp-metal body and reborn as a Soul Grinder.

It is whispered in the Warp that if the Soul Grinder can harvest the agreed upon amount of mortal souls, the Daemon within will be freed from its mechanical prison to return to the existence it once knew. However, it is not a debt that is easily settled.

Even as the Daemon slaughters and butchers its way across the galaxy, the price demanded erratically rises, sometimes forever remaining elusively out of reach.

Should the Soul Grinder be destroyed before the full soul price can be garnered, the Daemon will be offered another reincarnation as a Soul Grinder, only at a much steeper price than before.

So begins an inescapable cycle of soul-debt that damns the Daemon as eternally as any of the mortal souls it reaps.

The three Oaths of the Iron Pact that Soul Grinders make with the masters of the Forge of Souls are as follows:

Soul Grinders form the armoured spearhead of many of the Ruinous Powers' daemonic legions. The brutal impetus and violence of their assaults are so horrifying that very few mortal warriors of any race stand their ground when a Soul Grinder storms their lines.

Their daemonic nature allows them to appear out of thin air where least expected, and their Warp-metal hulls, animated and protected by the supernatural energies of the Immaterium, make them invulnerable to all but the most powerful of anti-tank weapons.

As Soul Grinders advance towards the enemy, the deadly siege guns fused to their wrists hammer their foes, smashing through the ranks of mortals in a storm of metal.

These cannons were built by artisans of Chaos who enchanted them to fire bolts of pure hatred, but even these are not the most powerful weapons in a Soul Grinder's arsenal; their smoking maws are capable of unleashing the baleful energies of the Warp itself.

These attacks take many different forms, all as lethal as they are bizarre. Sometimes, the Soul Grinders vomit gouts of searing Warpfire, while at other times, their whip-like tongues lash out like searing energy rays.

They have even been known to spit huge roiling masses of mutating ichor at incredible distances, annihilating entire enemy squads in one great blast.

Soul Grinders resemble a larger variant of the more common Chaos Defiler Daemon Engine, striding forth upon a chassis of six piston-driven, mechanical Warp-metal legs, each covered with blades and blasphemous Chaos iconography.

The daemonic portion of the Soul Grinder is attached to the top of the chassis, its great head and muscular arms towering over most other daemonic creatures.

The Soul Grinder is usually armed with a massive piston-driven claw known as an Iron Claw on one of its hands and a large ranged weapon known as a Harvester Cannon on its other arm.

The Soul Grinder can also be armed with two Iron Claws, trading in the use of long-range weaponry for extra close-combat potential. The beast is also armed with a powerful weapon known as a Mawcannon, which is actually a natural ability that all Soul Grinders share, as opposed to a specific weapon.

The Mawcannon unleashes lethal Warp energies through the creature's mouth. The weapon vomits forth a torrent of burning Warpfire known as a Baleful Torrent, or spits huge roiling masses of mutating phlegm at incredible distances, destroying entire enemy squads in one great blast.

The Soul Grinder can continue this form of attack throughout its time on the battlefield, which is known as a "Phlegm Bombardment."

There are some Soul Grinders that are capable of using their whip-like tongues to lash out like searing energy rays. Soul Grinders can also replace one of their Iron Claws with a Warpsword, a massive, ever-shifting blade of pure Warp energy that is the physical manifestation of the daemon's hatred.

The Soul Grinder can also unleash bolts of energy from their eyes known as a Warp Gaze. All Soul Grinders are capable of giving themselves in service to one of the four major Chaos Gods as well as the Forge of Souls; whether this grants them any extra weapons, powers, or abilities is not known to the Inquisition.

The technical specifications of the Soul Grinder have not yet been determined by the Ordos of the Inquisition.

A Soul Grinder strides across the battlefield 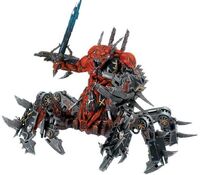 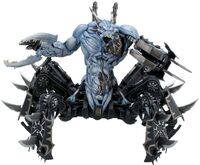 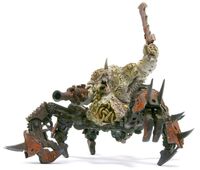 A Soul Grinder armed with a Plague Sword and an arm-fused Rot Cannon, this Soul Grinder is a daemon of Nurgle
Add a photo to this gallery

Retrieved from "https://warhammer40k.fandom.com/wiki/Soul_Grinder?oldid=372204"
Community content is available under CC-BY-SA unless otherwise noted.