Sons of the Phoenix

Sons of the Phoenix

"From the fires of war we rise!"

White, Purple and Gold
The Sons of the Phoenix is a Loyalist Space Marine Chapter comprised entirely of Primaris Space Marines created from the lineage of the Imperial Fists and raised during the Ultima Founding of ca. 999.M41.

Faithful to the Emperor and ritualistic in their battle cant, the Sons of the Phoenix pride themselves on plunging into the flames of battle.

They are constantly on crusade, which are led by their Chaplains. Their crusades are so impressive in spectacle they pave the way for the Imperial Creed to spread across the galaxy, and hence are followed by a great many holy men and women of the Adeptus Ministorum.

The Chapter's fleet was scattered by the opening of the Great Rift, and now the Sons of the Phoenix crusade to gather their forces back as one.

Sometime after their Founding, the Sons of the Phoenix were attacked by warbands of the Thousand Sons Traitor Legion from the Cult of Change.

During these attacks several members of the Chapter were taken captive in order to be used as specimens in the Thousand Sons' arcane experiments.

The Sons of the Phoenix wear off-white Mark X Power Armour to display their purity. The Aquila or Imperialis on the chest is gold, as is the shoulder pauldron trim.

The inset of the right pauldron is purple as is the right gauntlet and left knee plate.

The gold squad specialty symbol -- battleline, close support, fire support, Veteran or command -- is displayed on the right pauldron, while the inset of the left pauldron is white and proudly displays the Chapter's iconography.

The company number is displayed as a golden High Gothic numeral on the left knee plate or placed in the centre of the squad specialty symbol on the right pauldron.

An additional, smaller specialty symbol is displayed next to the company number on the left knee plate, which designates a company's tactical specialty.

Sons of the Phoenix sergeants display squad numbers on their left pauldron.

The Sons of the Phoenix's Chapter badge is a stylised black helm to which a star of the same colour is adjacent. A stylised black wing protrudes from the helm's bottom as black electric lightning bolts rise from the top. 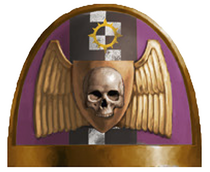 The pauldrons of the Sons of the Phoenix are often richly embellished, sometimes with sanctus bones and other sainted Imperial relics. 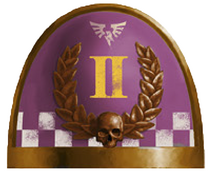 Sergeants usually wear their squad number on their left pauldron, often framed by the laurels of victory.

Sons of the Phoenix armourials (from top-to-bottom): left pauldron worn with the insignia of the battlefield role; right pauldron with the Chapter symbol

Sons of the Phoenix Intercessor wearing Mark X Tacticus Power Armour and wielding a Mark II Cawl Pattern Bolt Rifle; as a Chapter faithful to the Imperial Cult, this Primaris Space Marine displays votive candles upon his backpack which burn with the light of the Emperor, as well as bone relics attached to his shoulder pauldron.
Español
Community content is available under CC-BY-SA unless otherwise noted.
Advertisement