The Sons of Jaghatai is a Codex Astartes-compliant Loyalist Space Marine Chapter of unknown Founding.

It is a Successor Chapter of the White Scars.

The Sons of Jaghatai's Chapter colours are dark purple with other markings painted in bone white. The alpha symbol from their Chapter iconography is repeated much larger on the right shoulder plate in bone white.

The Sons of Jaghatai's Chapter badge is a black crescent with a tiny black Orkhon/Gokturk script character turned on its left side, contained within the crescent's horns, centred on a field of white.

The Sons of Jaghatai were created by Chris Blair for Games Workshop and showcased in White Dwarf 299. Given the Chapter's name, the Sons of Jaghatai are presumably descended from the White Scars, but this has not been confirmed in any official publications.

The design of the Chapter badge of the Sons of Jaghatai is drawn from the flags and iconography of the real-world Turkic nations, both historical and contemporary.

The crescent moon is often depicted on the flags of Central Asian nations, or countries bearing a great deal of Central Asian influence in their history, such as Turkey, Uzbekistan, Turkmenistan and others as it is a commonly symbol of the faith of Islam.

The Chapter's badge also includes, in place of a five-pointed star as is common for the flags of Turkic nations, a rune of the ancient Orkhon/Gokturk script, a runiform alphabet used by the early Turks that is broadly similar in appearance to the oldest of the runic alphabets originally used by the ancient Germanic tribes, known as Elder Furthark. 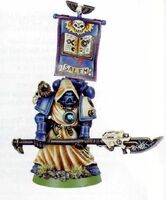 Sons of Jaghatai Tactical Squad and Scout Marine
Add a photo to this gallery
Retrieved from "https://warhammer40k.fandom.com/wiki/Sons_of_Jaghatai?oldid=365493"
Community content is available under CC-BY-SA unless otherwise noted.