"They leveled their outlandish weaponry at the enemy battle line, and the whining of their weapons built steadily to an earsplitting crescendo. A second later, a wave of sonic energy ripped through the Space Marines, splitting armour and bursting organs. Those that still lived fell to the dirt, wracked with brain-damaged spasms."

Sonic Weapons are a type of weaponry that cause damage through the use of intense and highly concentrated sound waves to create oscillation in the target until the target's substance, be it a living person, building, or vehicle, ruptures or fractures from the sonic stress.

These weapons range from relatively non-lethal devices that cause pain, discomfort, and confusion, to weapons potent enough that they can shake battle tanks into fragments.

Sonic Weapons are used by a variety of factions and intelligent species throughout the galaxy.

The following is a list of all known Imperial Sonic Weapons that are used by the many factions of the Imperium of Mankind, from the Adeptus Mechanicus to the Adepta Sororitas :

The following is a list of all known Sonic Weapons that are used by the ancient xenos race known as the Aeldari:

Sonic Weapons are particularly beloved of the mortal servants of Slaanesh, the Dark Prince of Pleasure, who find the extreme sounds produced by this technology pleasurable in the extreme.

The Chaos variant of these weapons also use Warp energies to enhance the potency of the sonic force produced by these weapons, and as such the following devices might be considered "psycho-sonic" weapons. The following is a list of all known Sonic Weapons employed by the forces of Chaos:

Sonic Weapons of the Screaming Vortex

Recently, in the Warp-realspace nexus known as the Screaming Vortex between the Calixis Sector and the Koronus Expanse, the Hereteks of the world of Ghibelline have attempted to duplicate the Sonic Weapons of the Noise Marines who serve Slaanesh. So far they have encountered only limited success, as the Ghibelline variants of the Sonic Weapons are less potent and much more cumbersome than the Noise Marines' Sonic Blasters and Blastmasters, but despite this, the Ghibelline contraptions are already in high demand and frequently the prize of bloody fights amongst the Renegade inhabitants of the Screaming Vortex. Such weapons are more custom-built Chaotic artefacts than mass-produced weapons, but they fall into three categories: 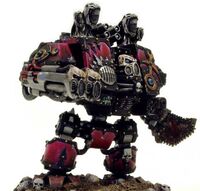 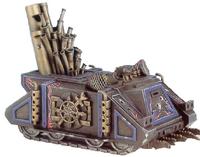 A Chaos Deimos Rhino equipped with a Warp Amplifier 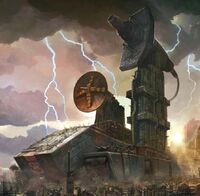 An Ork controlled Ordinatus armed with a Sonic Disruptor

A Chaos Noise Marine armed with a Sonic Blaster
Add a photo to this gallery
Retrieved from "https://warhammer40k.fandom.com/wiki/Sonic_Weapons?oldid=354069"
Community content is available under CC-BY-SA unless otherwise noted.