The Sonic Dreadnought differs from other Chaos Dreadnoughts in that its standard main armament is replaced with the Sonic Weaponry often favoured by the servants of the Prince of Pleasure. During combat, the Sonic Dreadnought moves across the battlefield continuously broadcasting discordant howling and screams of ecstasy and madness, driving its enemies insane or killing them with the power of extreme sound. These Dreadnoughts are usually sighted fighting alongside Chaos Noise Marines whilst on the battlefield.

Lament of the Damned

There exists a Chaos Dreadnought battle formation used by the Forces of Chaos known as the Lament of the Damned. This formation is made up of at least three Chaos Sonic Dreadnoughts and can contain as many as nine. The Dreadnoughts are led into combat by a fallen Chaos Lord or Chaos Champion of Slaanesh who has been eternally enslaved within a Dreadnought frame and daemonically-possessed through the enactment of occult rituals.

The combined effects of the Sonic Dreadnoughts' many Dirge Casters and Sonic Weaponry can drive even the hardiest of enemies insane merely by being within proximity to the Dreadnoughts, as reality itself rebels and begins to mutate under the power of their Warp-fueled assault. This formation is known to have been used by the Exquisite Host Chaos Space Marine warband during the 13th Black Crusade of Abaddon the Despoiler in 999.M41. 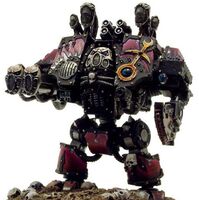 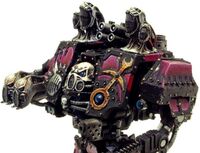 The Sonic Dreadnought Lord Sothai as seen from the front side

The Sonic Dreadnought Lord Sothai as seen from the rear
Community content is available under CC-BY-SA unless otherwise noted.
Advertisement