The Solar Hawks is a Loyalist Space Marine Chapter and a rare Successor Chapter of the White Scars, raised during an unknown Founding, but the Chapter dates back to at least the 35th Millennium.

Almost nothing is known about this Chapter in Imperial records save for its participation alongside its parent Chapter in the campaign known as the Blackfist Scalping.

Sharing their forefather's battle lust and aggressive style of lightning warfare, the Solar Hawks are notable for being aggressive and noble.

The Astartes of this Chapter embody all that is best in the sons of Jaghatai Khan and honour their progenitor by either painting a shoulder guard or gauntlet white.

As their name suggests, they field an especially large number of airborne assets, regularly deploying whole wings of Stormtalons or Stormravens into battle.

Deathwatch Librarians are selected primarily from members of three Space Marine Chapters -- the Blood Angels, the Blood Ravens and the Solar Hawks, due to the large numbers of psychically-gifted Battle-Brothers found among these Chapters.

The Solar Hawks' Chapter colours are sunburst yellow with a golden Aquila or Imperialis on the breastplate. The entire left arm is white, in honour of their parent Chapter's original colours.

Squad designation is indicated by a black High Gothic numeral stenciled in the centre of the squad specialty symbol, and the colour of the squad markings indicates the Astartes' company.

The Solar Hawks' Chapter badge is a red hawk's head wearing a black hood, centred on a field of white. 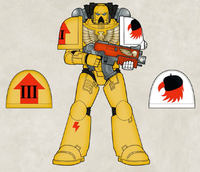