A Sniper Rifle is a high-powered and highly accurate projectile or directed energy weapon that is used to attack distant foes and lightly armoured targets at extreme ranges with unerring accuracy. Capable of firing powerful shots with lethal precision, sniper rifles can fell even the sturdiest enemy.

Small sniper teams or even lone snipers can stop advancing troops in their tracks, holding them up for hours while other military assets are called up to deal with them. Sniper Rifles are commonly used by Imperial forces such as Space Marine Scouts who utilise these deadly weapon on missions where disruption of enemy forces is paramount.

Space Marine Scouts are perhaps the most well known Imperial troops who utilise the deadly Sniper Rifle. Scout Squads are the vanguard of a Space Marine force, infiltrating behind enemy lines and sowing disruption and securing vital strongpoints.

These masters of stealth and reconnaissance utilise a unique model of Sniper Rifle, an Astartes-pattern weapon that boasts a powerful telescopic sight and fires a solid projectile round which allows the wielder to fire at enemy weak points and distant foes with deadly and extreme accuracy.

Those Space Marines that are seconded to the Deathwatch, the Chamber Militant of the Inquisition's Ordo Xenos, often make use of a highly specialised Sniper Rifle pattern known as the Mark IX Ultra Pattern sniper rifle. Just over 2 metres in length and weighing close to 50 kilograms, the massive Mark IX Ultra is as intimidating as it is effective.

The Mark IX is a heavy needler sniper rifle used by the Deathwatch for long-range anti-personnel and anti-materiel work. With its long barrel and powerful scope, the Mark IX allows a Deathwatch sharpshooter to engage targets with incredible accuracy at very long ranges.

The Mark IX is a highly-respected and revered weapon, and it is often selected as the weapon of choice for Space Marine snipers in many Deathwatch Kill-teams. Each Mark IX has the following integral systems:

Space Marines are not the only ones to make use of these precision instruments of death, as there are many different Sniper Rifles utilised by the marksmen of the Astra Militarum. Some regiments prefer to use Needle Sniper Rifles that fire small darts made from deadly neuro-toxins.

This exotic weapon is highly prized by snipers, as the Needle Rifle offers the perfect combination of range, stealth, and deadliness. The only argument against the use of these exquisite weapons is that they are ineffective against heavily armoured targets.

Others make use of the "Long-Las," a variant of the humble Lasgun with a reinforced barrel and overcharged power cells known as "Hot Shots." Favoured by Imperial Guard and Scout Marine snipers, the Long-Las is a specially modified version of the standard Lasgun for added range and accuracy. As its name implies, a Long-Las also has a much longer barrel than a Lasgun, both to increase range and prevent overheating.

This can make a Long-Las up to twice as long as a standard Lasgun, making it unwieldy in close quarters. The most infamous snipers amongst Imperial Guard regiments are Abhuman Ratlings, who use these highly accurate weapons to snipe enemy commanders and tank crews with contemptuous ease, and who are often deeply amused at the panic and confusion they unleash.

Less advanced than the standard military needle sniper rifle, the Absolution Pattern Sniper Rifle is a solid projectile weapon and is more easily obtainable and very effective against lightly armoured targets. Complete with a tripod brace, silencer, and telescopic sight, in the hands of a skilled marksman it can quickly crush insurrections, put down rebellious natives, or quash labour revolts. The integral noise baffles built into the rifle make it very quiet.

The Exitus Rifle is the signature weapon of the Vindicare Temple of the Officio Assassinorum. This rifle is amongst the finest examples of Imperial weaponsmithing. Hand-crafted by a Magos-Artisan of the Adeptus Mechanicus, each Exitus rifle is part of a matched set -- both pistol and rifle customised to the specifications of the individual Assassin.

The Exitus weapons contain sophisticated Machine Spirits and utilise ammunition constructed from special heavy-gravity alloys to penetrate nearly all forms of known protection. All Exitus weapons incorporate a silencer and a selector switch. The Exitus Rifle has a built-in telescopic sight.

All Exitus ammunition (including all special rounds) contain miniaturised Cogitator targeting-spirits that make them nearly impossible to avoid. Exitus rounds can also be programmed to self-destruct. The rounds are disintegrated, consumed as if destroyed by a virus, and leave no trace behind.

Vindicare Assassins are normally issued a set of special ammunition when sent on an assignment. These unusual shells are very rare, each extremely difficult and time-consuming to craft. Therefore, the Assassin is usually given a single shell of each type. Occasionally, other special rounds (such as the hyphosphus incendiaries) are issued in their place. The ammunition described below may only be utilised by the Exitus Rifle and the Exitus Pistol:

Xenos species also use sniper weapons to great effect. Aeldari Rangers use their trusty Long Rifles to take out vulnerable targets at extreme distances while remaining hidden. The T'au use teams of semi-autonomous Sniper Drones to take down their targets at long range while T'au Pathfinders possess technologically advanced Rail Rifles that make excellent sniper weapons.

Genestealer Cult Sanctuses often make use of Sniper Rifles when they want to kill at a distance. For this task, they utilise a marksman Silencer Sniper Rifle converted to fire needler rounds. Each toxin dart carried by the Sanctus is filled with an alchemical serum brewed by their gene-sect's Biophagus. Engineered from a pure sample of Genestealer blood, this mind-affecting poison can render its target a drooling imbecile in solar seconds.

The Jackal Sniper Rifle is the weapon favoured by Genestealer Cult Jackal Alphuses. So accurate and focused are these fourth generation Neophyte Hybrids upon their task that some members of the Ordo Xenos have even compared them to Imperial Assassins. 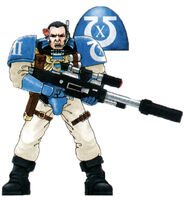