Skulltaker, also known as U'zuhl, is an infamous Bloodletter and Herald of Khorne who has claimed a Juggernaut Daemonic Steed named Khul'tyran as his mount and has been anointed as the Blood God's own Sacred Executioner.

Skulltaker often goes to war at the head of the Cohort of Blood, an assemblage of the greatest Bloodletters selected from amongst the daemonic legions' ranks. The Herald's mere presence on the field of battle drives Khorne's Lesser Daemons to impossible heights of frenzy, as all Bloodletters regard him as the pinnacle of their kind and an exemplar of all that their bloodthirsty god demands. Whether battling against the armies of realspace, the legions of Khorne's rivals, or even against fellow warriors of the Blood God, Skulltaker will always seek out the greatest champions of the enemy. Upon sighting one worthy of his skills, he will strike down all who stand between him and his quarry, contemptuously hacking his way through the press of melee so that he may confront his chosen opponent and offer them the rite of single combat. Those that flee are cut down or beheaded without thought, not worthy of any greater ceremony. Those brave or foolhardy enough to accept the Champion of Khorne's bellowed challenge suffer an even worse fate.

It is said that when Khorne created U'zuhl, the first thing it did was decapitate the first creature it saw, another Bloodletter, which pleased the Blood God immensely. So began an existence of decapitation that has spread terror throughout the mortal and immortal universes. After his bloody awakening, U'zhul wandered the realms of the Warp and of reality in search of the mightiest foes against which to test his martial skill, and mortal or not, all warriors fell to his blade. When the Bloodletter took his eight hundred and eighty-eighth skull, the daemonic champion in the making was chosen by his god to enter the Skullpit, the proving ground of all Khorne's Bloodletter champions. There U'zhul was not only unmatched, but beheaded every one of his opponents without receiving so much as a scratch in return.

In recognition of U'zhul's achievement, Khorne not only anointed him as both a Herald and his Sacred Executioner, but bestowed the singular title of "Skulltaker." The daemon's body swelled with Warp energies, and as an extension of his form, his Hellblade also grew in power. Thus was formed the Slayer Sword, a formidable weapon capable of cutting through reinforced plasteel and felling even the most monstrous of beasts with a single blow.

In the midst of every battle he participates in, Skulltaker seeks out the mightiest foes on the battlefield so that he may slay them himself with his serrated Hellblade. A duellist beyond compare, Skulltaker weaves his blade in bloody crescents that dismember, but rarely slay. Those who flee this confrontation are cut down without remorse, while those who stand their ground usually suffer the same fate, though at a slower and far more painful pace. Skulltaker likes to take its time with foes, dismembering them limb by limb yet not taking their life until the end to prolong its pleasure in the slaughter. Only when its opponent is a limbless horror upon the ground does it offer up death, grabbing their head, intoning the eight Words of Sacrifice while it uses Warpflame to wreathe the victim's head in hellfire, burning away flesh and muscle until only a bare, charred skull remains. With a savage twist, he tears free the naked trophy, snapping it from the spine and holding it aloft for all to see. Skulltaker then places it within the grisly sack it carries, which contains all the other skulls it has liberated from their owners during the battle. He butchers his way towards his next victim, and proceeds to enact the same ritual, over and over again, until no foe worthy of his undivided attentions remains.

Since his ascension, the Champion of Khorne has carved a bloody path through the millennia. Skulltaker fought alongside the Daemon Primarch Angron on Armageddon, cutting down several Grey Knights Brother-Captains in his infinite wrath. On Agrippina-6, Skulltaker slew the Ork Grimsnag Urk in a titanic duel that lasted a solar day and a night, the combatants wading through the mutilated corpses of the Warlord's once unstoppable horde. A full score of Aeldari Exarchs fell to his blade during the fighting at Haranshemash, even their prodigious skill and experience falling short of the Herald's. Indeed, every race in the galaxy has its fearful legends concerning Skulltaker and his horrific exploits.

When he eventually returns to the Brass Citadel within the Realm of Chaos, Skulltaker presents his trophies to his master. Most, Khorne takes for himself; they are impaled upon brass spikes that adorn his keep. A few -- those belonging to warriors that offered their killer a real challenge before they fell -- Khorne begrudgingly allows the greatest of his Sacred Executioners to keep. Skulltaker weaves these into the horrific Cloak of Skulls he wears using bloody sinew taken from the bodies of other victims, to sit alongside his other great triumphs.

Khul'tyran is the legendary Juggernaut mount of Skulltaker. Though Skulltaker prefers to fight alone, occasionally he will mount the beast. At the time the creature was claimed by Skulltaker from Khorne's infernal foundries, Khul'tyran was said to have been the toughest daemonic mount in the Juggernaut stockade. The daemon-beast had killed more of his kin than any other before or since. He prowled the perimeter of the pens, regularly making bids for freedom -- he once shattered the compound's wall and would have escaped were it not for the dozen Heralds of Khorne who held him back. Skulltaker selected Khul'tyran from the pack when the Sacred Executioner witnessed the beast goring three Heralds at once.

Since then, the pair has regularly erupted from the Warp to harvest a bounty of skulls for the Blood God. They have dueled others on countless worlds in the mortal realm, never yet losing a challenge. While Skulltaker decapitates his foes with the Slayer Sword, Khul'tyran tears into armour as if it were soft flesh, and flesh as if it were ash. So pleased is Khorne with the pair's bloody work, that while in the Immaterium, Khul'tyran is the only Juggernaut permitted to prowl the smoke-choked passageways of the Blood God's Brass Citadel, as its reward for engaging in unbridled destruction. 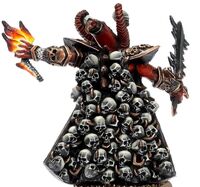 Skulltaker's infamous Cloak of Skulls; it is composed of the skulls of his most worthy victims
Add a photo to this gallery
Retrieved from "https://warhammer40k.fandom.com/wiki/Skulltaker?oldid=320472"
Community content is available under CC-BY-SA unless otherwise noted.