The Skull Helm is the Power Armour helmet worn by a Space Marine Chaplain that is often carved to resemble the face of a human skull, an ancient symbol of death now used to mark the memory of the Emperor of Mankind's great sacrifice for humanity during the Horus Heresy.

The armour of a Space Marine Chaplain is a daunting sight, adorned with icons of battle and death. Every aspect of a Chaplain's garb serves as a reminder of mortality's impermanent nature, and thus, the significance of preserving the immortal soul. One of the most iconic elements of a Chaplain's wargear is his Skull Helm, a stern visage that evokes the Emperor's wrath and terrible sacrifice. These helms may take many different forms and have been crafted by numerous Space Marine artificers across the galaxy. Universally, however, they are all fearsome in aspect. 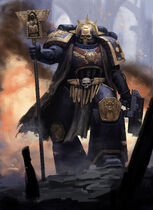 A Space Marine Chaplain from an unknown Chapter wearing a devotional Skull Helm.

A Chaplain of an unknown Space Marine Chapter wearing a devotional Skull Helm and Artificer Armour. 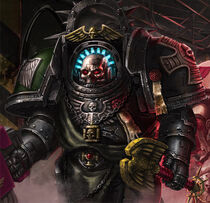 A Chaplain of the Dark Angels Chapter wearing a devotional Skull Helm arrayed in Terminator Armour.

The famous Wolf Priest, Ulrik the Slayer, of the feral Space Wolves Chapter wearing the ancient Chapter artefact, the lupine-skull Helm of Russ.
Add a photo to this gallery
Retrieved from "https://warhammer40k.fandom.com/wiki/Skull_Helm?oldid=327462"
Community content is available under CC-BY-SA unless otherwise noted.