The Skull Cannon of Khorne is a Daemon Engine in the form of a great chariot employed by the Daemons who serve the Blood God Khorne.

The Skull Cannon of Khorne is a large armoured cannon positioned on the top of the main body of a chariot known as a Blood Throne of Khorne, to which two Lesser Daemons of Khorne known as Bloodletters are chained.

The Skull Cannon fires the flaming skulls of those whom the servants of Khorne have consumed across the battlefield, screaming as they arc towards their targets.

This immense weapon features serrated plating and decorative details such as metal skulls and teeth, while at the tip of the cannon there is a ferocious open maw.

There are records in the Black Library that speak of daemonic Skull Cannons, war machines forged in the furnaces at the foot of the Blood God's throne in the Realm of Chaos.

These Daemon Engines are so murderously efficient and sinister that some amongst the Ordo Malleus of the Inquisition believe that they have been forged by Khorne's own hand.

Much like Khorne's Juggernauts, the Skull Cannons are monstrous fusions of daemonic spirit and hell-forged construct. Their twisted and clinkered forms burn with the desire to shed blood and crush bones, to exalt Khorne with every trampled foe.

Atop the Skull Cannon ride a pair of Bloodletters, howling with battlelust and chanting Khorne's praises as their armoured steed rumbles towards the enemy. These are the same Daemons that oversaw the machine's creation, now charged with guiding it in furtherance of the Blood God's unholy purpose.

The Skull Cannon hardly needs encouragement to maim and slay -- the Daemon bound within its black heart is as wrathful and murderous as any in Khorne's service. Indeed, a Skull Cannon is more wilful and proud than the wildest of Juggernauts, and pays little heed to the snarling creatures harnessed to its mechanical glory.

As the Skull Cannon grinds across the battlefield, its spiked wheels mangle everything in its path. Those who die the instant as the engine rumbles over them can be counted the most fortunate of its victims. Others, crippled and broken, are fed screaming into the Skull Cannon's gaping maw, there to be roasted by daemonic fire and ground into fragments.

Most of the remains are ejected at the Skull Cannon's rear in a red wake of bone splinters and blood. Only the skulls are retained, fleshless and scorched, but otherwise whole. They are infused with the Blood God's endless and abiding wrath until their empty eye sockets weep blood and their slack jaws jibber with rage.

The skulls catch fire as they are launched, and roar with evil laughter as they fly. They slam into the enemy ranks, burning them from cover and leaving a trail of scorched and blazing dead.

A Skull Cannon of Khorne in battle. 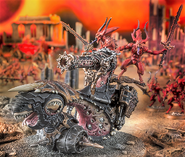 The Skull Cannon rains Khorne's fury upon the foe, the wrathful daemon trapped within its hell-forged metal revelling in the bloodshed.