The Skitarii Vanguard, informally known as "Rad Troopers," serve as the vanguards of the Skitarii cohorts of the Adeptus Mechanicus Forge Worlds.

They are feared throughout the Imperium, for they use the baleful radioactive energies of the Forge Worlds as their weapon and are capable of operating in the galaxy's most hostile warzones.

Equipped with pack generators that bleed potent radioactive by-products, these Omnissian martyrs are so saturated with radiation that even to approach them is to succumb to their peculiar curse. Their baroque carbines fill the air around their foe with harmful emanations, corrupting the atmosphere itself even as they punch hyper-irradiated shot into the flesh of their victims.

Should their foes survive the worst of the shooting, critical levels of rad-poisoning may still be achieved by the very proximity of the Skitarii Vanguard, who will look on in silent interest as an enemy that thought the worst was over stumbles, chokes, and dies of radiation poisoning.

Over the many civil wars waged by the Cult Mechanicus, the Vanguard have learned to endure and weaponise their lethal radioactive emissions. So much radiation bleeds out from a Skitarii Vanguard's wargear that foes in close proximity become weakened and fatigued; for non-Skitarii to be stationed in the same barracks is a death sentence.

The Vanguard themselves are theoretically safe inside their war plate, but on the rare occasions these warriors unscrew their helmets, the sight of their missing teeth and hairless, sore-pocked skin tells the awful truth. It is a price they willingly pay, for their devotion to the Machine God is absolute.

The Vanguard troopers' signature Radium Carbines unleash volleys of hyper-irradiated shot that can fell any target. Even if foes survive the glowing cavalcade, the rad-poisoning of the shells contaminates the air and ground.

The most blessed of Skitarii pass a point called the "Crux Mechanicus," their body more machine than flesh. Those that reach this stage of mechamorphosis are known as "Skitarii Alphas." Some go on to attain the rank of "Alpha Primus" -- overseers who can operate independently for standard years if necessary, as solid and reliable as the titanium, steel and iron that replaces their flesh.

Though the Vanguard troopers' signature Radium Carbines slowly kill their wielders, their effect upon those struck by their bullets is a hundred times worse. Should enough hyper-irradiated shot penetrate its target, the secondary effects of the rad-volley become amplified to the point where not even a Tyranid could possibly survive.

Because of this, Skitarii Vanguard are assigned to the most hazardous warzones the galaxy can offer. They bear this duty stoically and in solemn silence, fighting to the last in the name of their inhuman god.

All standard Skitarii Vanguards are armed with:

One Skitarii Vanguard in a squad may take one of the following:

Optional wargear a Vanguard Alpha can take include:

Skitarii Vanguard from the Forge World of Mars; Skitarii infantry usually have their squad number emblazoned upon the hem of their robes. 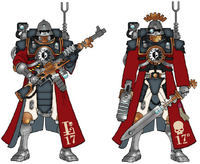 Skitarii Vanguard from Lucius; the black battle plate is made from a rare alloy scorched black by the artificial sun within the planet in a process known as the solar blessing. 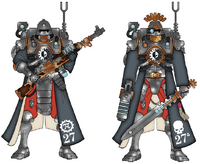 Skitarii Vanguard from Agripinaa, note that the red and black heraldry of Mars is inverted on the Skitarii of Agripinaa. 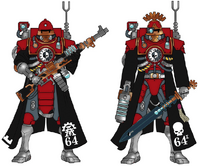 Skitarii Vanguard from Stygies VIII; in the past this Forge World has been accused of heresy and so to show their faith in the Omnissiah, Stygian uniforms incorporate the colours of Mars. 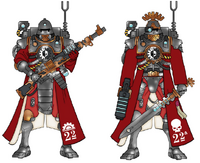 Skitarii Vanguard from Graia; Graia accentuates the traditional deep crimson of Mars with the bright red of split blood. 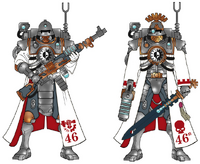 Skitarii Vanguard from Metalica; unusually, the heraldry of this Forge World's Skitarii is dictated by their battlefield role. 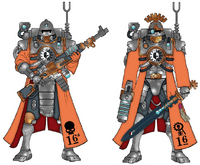