"Fear the iron fist, for its grip is death."

A Skitarii Ranger of the Adeptus Mechanicus is a hunter of sentient creatures in the same way that Tech-priests are hunters of knowledge -- the enemies of the Omnissiah in particular. Skitarii Rangers are the unstoppable cyborgs of the Skitarii Legions that do not rest until the bloody deed is done, for they are driven ever onward by the imperative to locate their foes and ensure their destruction. They do this not by Drop Pod strikes launched from above, nor by sudden teleportation into the midst of the enemy, but by stalking their quarry over the course of solar weeks or even months until it can run no more. Once the designated target is in their crosshairs, the air fills with the thump and crackle of Galvanic Weaponry, even as the Skitarii continue their restless advance. The stink of electrocuted corpses is never far behind.

As with so much of the Cult Mechanicus' business, the truths of the Skitarii's creation are kept a close secret. Some are vat-grown or cloned, whilst others are repurposed from mind-wiped convicts or warriors handed over as punishment for failure or desertion. Regardless of origin, all find a fanatical faith in the Omnissiah soon after their inception. It is then that their true transformation begins.

Without exception the Skitarii have pallid bodies of puckered flesh and sutured cybernetics. Ceramic valves and adamantium sockets stud hard knots of translucent muscle. In imitation of the ancestor cohorts that first ground their limbs to stumps upon the dunes of Mars, the Skitarii cut off their lower legs and replace them with prostheses of inviolate alloy. Even the brains of these warriors are grotesque hybrids of grey matter and twisting neurocircuitry. One who looked for consistency in Skitarii augmentations would be sorely disappointed. A soldier of the Mechanicus may have a punchcard skullslot and leather bellows for lungs, whilst at the same time housing quantum bioware in his brain. It is often said that were one of these enhanced warriors to be rendered down, traces of nearly every element known to man could be found somewhere in the remains. The Tech-priests know this to be no exaggeration, for dissection is but one of the dark fates a Skitarius might undergo in order to satisfy his masters' predatory curiosity.

The most blessed of Skitarii pass a point called the "Crux Mechanicus," their body more machine than flesh. Those that reach this stage of mechamorphosis are known as "Skitarii Alphas." Some go on to attain the rank of "Alpha Primus" -- overseers who can operate independently for standard years if necessary, as solid and reliable as the titanium, steel and iron that replaces their flesh.

To fight the foot soldiers of the Cult Mechanicus is to kill or be killed, for the Skitarii Rangers never give up when hunting down their foes and their stamina is legendary. In the lean and hungry days of Mankind's hominid ancestry, a hunter would kill far larger prey by tracking it to the point of exhaustion. It is by this principle that Skitarii Rangers hunt the reaches of the galaxy -- once the Rangers have been despatched, they will home in on their quarry at a slow but relentless pace. At first their victims, ranging from pirate warbands to xenos warhosts, can slip the net of Skitarii gunfire easily enough. If they flee far enough, solar months will pass, even standard years -- long enough that the terror of the initial engagement is all but forgotten. All the while Skitarii Rangers march in silent, unstoppable lockstep through trenches and ruins, their noose closing a little tighter with every passing night. Just when their quarry assumes itself safe, a constellation of blue will-o-the-wisps will appear on the horizon. Almost imperceptibly, it grows closer and closer -- and then the darkness lights up with the blazing of gunfire. The Skitarii, for whom the original engagement never ended, close in again and again until the deed is done. Whatever perils they face, the Skitarii march falters not.

As standard, all Skitarii Rangers are armed with:

One Skitarii Ranger in a squad may take one of the following:

Optional wargear a Ranger Alpha can take include: 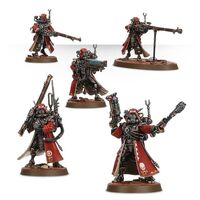 A squad of Skitarii Rangers led by a Ranger Alpha

Skitarii Rangers and a Ranger Alpha of Mars wear combat robes emblazoned with the icon of their Forge World; the Alphas and Princeps of the Skitarii Legions often bear a skull in place of their Forge World icon; they may also display their maniple sigil, either appended to their squad number on their war robes, or on their chestplate or helm

Skitarii Ranger and Ranger Alpha of Agripinaa; note that Within the ranks of Agripinaa's soldiery, the sacred red and black heraldry of Mars is reversed; there are some amongst the brotherhood of Mars who imply Agripinaa's sense of truth and logic is likewise inverted; this Skitarii Alpha wears battle robes in the sombre black of his Forge World; his wargear and armour is trimmed with ancient gold taken from the strata of Agripinaa's surface that is unscarred by war

Skitarii Ranger and Ranger Alpha of Graia; note that the Skitarii of Graia accentuate the deep crimson of Mars with the bright red of spilt blood; their detractors believe this is because Graian warriors take an unhealthy interest in each spray of gore that jets from their victims

Skitarii Ranger and Ranger Alpha of Lucius; note that the battle plate of Lucius' Skitarii cohorts is dark, almost black in colouration; ever since the Inculcata Schism, Lucius' Skitarii Legion have used the same system of markings as Mars; they have even adopted the deep red of the first Forge World, although the cream and dark metal of their planet's original heraldry lie beneath

Skitarii Ranger and Ranger Alpha of Ryza; note that the ochre armour plates and robes worn by Ryza's Skitarii are the same hue as the immense rust dunes that bestrew their planet; the interior of these robes are deep red in memory of the blood that has been spilt there over the millennia; Ryza's Skitarii often bear Purity Seals of blood-wax and parchment to signify their freedom from harmful scrapcode

Skitarii Ranger and Ranger Alpha of Stygies VIII; note that Stygies VIII's Skitarii wear long black robes, crimson armour plate and burnished steel cybernetics; should such a warrior shed his robe, he could almost pass for one of Mars' cohorts -- a similarity Stygies has exploited many times; the officers of Stygies VIII's Skitarii wear red, silver and black heraldry
Add a photo to this gallery
Retrieved from "https://warhammer40k.fandom.com/wiki/Skitarii_Ranger?oldid=317786"
Community content is available under CC-BY-SA unless otherwise noted.