"I will rip the bones from your body and leave your skin to rot! But your skull I will give to the skull-god, and it will be one among the multitude."

Skarbrand the Exiled One is a Bloodthirster, a Greater Daemon of the Blood God Khorne. Skarbrand is wrath incarnate, a creature of murderous violence unleashed from the Brass Realm to reap skulls and souls in a storm of rage.

Once he was the greatest of Khorne's generals, the mightiest of all Bloodthirsters, until an act of betrayal saw him cast out due to the machinations of Tzeentch, the Lord of Change, and he was exiled from the service of Khorne.

Even the anointed Daemon Hunters of the Imperium fear Skarbrand. The Grey Knights might have the arcane wargear and psychic mastery required to vanquish the daemons of Chaos, but against a being as powerful as Skarbrand only terminal violence is enough to halt his rampage.

Skarbrand is a paragon of violence, a whirlwind of bloodshed and destruction in whom the Blood God once rejoiced. Nations were smashed to splinters by Skarbrand's mighty axes and the armies of the other gods quaked and quailed at his coming.

It was Skarbrand who destroyed the First Palace of Slaanesh and killed Nurgle's great Poxviathan. In a great battle with the mightiest of the Bloodthirsters, he received his daemonic axes, Slaughter and Carnage, which were imbued with the spirits of his defeated enemies.

For these deeds and many others, limitless glory was heaped upon him. No Daemon had served the Blood God more faithfully or shed more blood than Skarbrand. This mighty Bloodthirster once led the greatest of Khorne's daemonic legions, slaughtering untold millions in the cause of murder. Worlds were left ravaged in the wake of the carnage wrought by the Greater Daemon as well as the realms of the other Chaos Gods with equal rage. But foolish pride proved his undoing.

Tzeentch, the Lord of Change, had noted the aptitude of Khorne's favoured slaughterer and through his guile and manipulative whispers, fuelled Skarbrand's flames of hubris into a raging inferno against his lord. Through Tzeentch's machinations, he continued to change the skein of the Bloodthirster's fate, goading and taunting the Daemon lord into committing ever greater acts of bloodletting.

He stoked the creature's rage into incandescent fury, until Skarbrand took up his axe and struck a blow against his master when Khorne's attention was elsewhere.

Though a mighty blow that would have felled an army, the Bloodthirster's strike merely opened a minute chink in the armour of the Blood God, attracting his desolate gaze. Enraged at his servant's temerity, the Blood God's anger was terrible to behold.

Khorne snatched up the wayward Bloodthirster by his throat and proceeded to throttle him until all that remained of Skarbrand's personality and thought had been driven out, leaving only the burning rage that had powered his fateful axe strike.

After dragging the Greater Daemon to the pinnacle of the Brass Citadel, he held aloft the Bloodthirster for all within his realm to see, an example to all who dared to challenge his rule. Khorne then hurled Skarbrand across the Realm of Chaos.

Skarbrand blazed a trail of fiery destruction for eight solar days and nights, a rage-filled meteor flying across the realms of the Chaos Gods, leaving scorched devastation in his wake. When he finally crashed to a stop, the Daemon lord carved a great canyon with his landing, his leathery wings torn asunder by the force of the impact. Exiled for eternity, the frustrated Skarbrand bellowed his wrath towards the heavens.

He then set upon an eternal path of slaughter that would dwarf all the bloodshed that had come before it. Spurred on by his mindless betrayal, Skarbrand has become the embodiment of wrath incarnate. Bloodshed and war inevitably follows wherever he treads.

Oceans of blood have been shed in the name of Khorne with his legendary twin Daemon-axes. Roused only by the anger that spurred his betrayal, Skarbrand exudes anarchy and death, and where he treads, bloodshed and war follow.

No loyalty or logic can defy Skarbrand's aura of destruction. No cowardice survives the overwhelming need to slay. But all this slaughter is for naught, for Khorne has no mercy in his black heart. Skarbrand's exile is eternal. Yet Skarbrand continues to serve the Blood God more loyally than ever, despite his tortured banishment from his lord's realm.

In recent history, Skarbrand has appeared several times in the material universe. On those occasions he has wrought untold carnage and destruction in his wake. In the early years of the 41st Millennium, Skarbrand appeared on the doomed Imperial Agri-world of Gheistos during the lamentable Gheistos Cataclysm.

When the Vorpal Swords Space Marine Chapter attempted to relieve the beleaguered forces of the Imperial Planetary Governor at the Governor's Fortress where his forces were besieged by a horde of Daemons, they were attacked by Skarbrand the Exiled One.

In 975.M41, Skarbrand appeared on the Cadian-held Fortress World of Lutoris Epsilon. His berserk rage infected all he surveyed, driving the Imperial Guardsmen defending the planet to turn on each other in an insane frenzy. On the next occasion, the Bloodthirster faced Lord Commander Dante, the Chapter Master of the Blood Angels Chapter in single combat. The valiant Astartes clove the mighty Bloodthirster in twain at the Gates of Pandemonium, banishing the Greater Daemon back to the Warp.

Even in his banishment, Skarbrand continues to serve his lord and further the ends of Chaos. He played a crucial role in the shattering of Craftworld Biel-Tan when he made a pact with The Masque to attack the forces of that craftworld on the corrupted Maiden World of Ursulia. Skarbrand made it aboard Biel-Tan through a corrupted Webway portal from Ursulia, but was defeated in battle and banished back to the Warp by that craftworld's Avatar of Khaine.

He later fought a titanic duel with the resurrected Primarch Roboute Guilliman aboard a Blackstone Fortress in the Maelstrom as the primarch sought to reach Terra during the Terran Crusade after he was freed from captivity by Cypher and Sylandri Veilwalker.

Skarbrand and his Daemons had disagreed with Kairos Fateweaver's plan to keep the primarch alive but imprisoned, and launched an assault on the Blackstone Fortress to claim Guilliman's head for the Blood God.

Fateweaver and Skarbrand chose to put aside their mutual disdain and allied to prevent Guilliman from escaping the star fortress. Guilliman managed to defeat the Greater Daemon only as a result of the sacrifice of the Black Templars Emperor's Champion Marius Amalrich.

Since the opening of the Great Rift in the Era Indomitus, Skarbrand has moved erratically across the galaxy, his sheer fury manifesting terrible Warp Storms around him. He most recently was one of the daemonic commanders of the Khornate Blood Crusade.

Skarbrand is a towering figure, an immensely muscled killing machine who embodies the insensate wrath of the Blood God. Since he was hurled from the Brass Realm by his raging god, Skarbrand has been earthbound, his wings wrecked by the brutal impact that saw him carve a furrow through the Realm of Chaos.

Once mighty pinioned things, they are now tattered remnants -- with ragged leather stretched and torn between broken spurs. Lengths of spiked chain span the sorrowful ruin, piercing the spines to keep them from unfolding further. Within the breaks in the torn flesh, cracked shards of bones are visible.

The Blood God knows no mercy and will grant Skarbrand no succour, regardless of the unfathomable carnage the outcast Bloodthirster causes in his name. Despite an age of battle Skarbrand still bears the wounds inflicted upon him when Khorne cast him out of his domain. It seems likely they will never heal. Skarbrand's torn face, bared skull, broken teeth and cracked horns all speak of the Blood God's ire.

In battle, Skarbrand wields a pair of daemonic axes in his gnarled fists. Trapped within each blade is a Greater Daemon of Khorne, its power and rage added to Skarbrand's as he uses them to hack and chop his way through the foe.

That he could bind such powerful rivals to his will is a testament to Skarbrand's once transcendent power. The strange metal of Skarbrand's brazen axes has been warped and twisted by the daemons within them. Eyes leer out from the blades with malicious intent, the axes possessing a thirst that can only be slaked by blood.

The origins of these fell weapons hearkens back to days of yore, when Skarbrand carved a gore-ridden trail of victories and rose to lead the Blood Legions of Khorne. He continued to forever seek out the next challenge worthy of his martial attentions. At last, after slaughter untold, only the greatest of his fellow Bloodthirsters remained as worthy rivals.

Thus Skarbrand sought them out and, at the Battle of Infernus Plains, overpowered even the mightiest of his rivals. As a conqueror he stood atop the piled dead, capturing the soul stuff of the two most powerful of the defeated and binding them into weapon form. Thus were born Slaughter and Carnage, Skarbrand's matchless axes, blades that crave blood as insatiably as their wielder.

Looking down from his Brass Throne, Khorne saw the defeat of his greatest Bloodthirsters. The act pleased him, for the god of rage and battle cares not from whence the blood flows, only that it does so. And in that way did Skarbrand ascend to the head of the Blood God's legions, becoming the right hand of almighty Khorne himself. 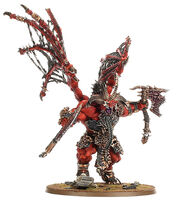 Skarbrand the Exiled One, wielding his daemonic axes Carnage and Slaughter. 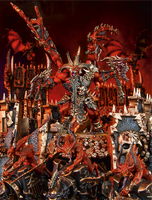 Skarbrand and his daemonic minions prepare to reap a bloody tally of skulls for the Blood God.
Español
Community content is available under CC-BY-SA unless otherwise noted.
Advertisement