— Rule CCCLIX, the Rule of the Sororitas, Volume VI

A Sister Repentia is one of the fanatical, self-mutilating Human female warriors who serve within the Orders Militant of the Adepta Sororitas.

Having failed or fallen short of the strict religious codes expected to be followed by the Sisters of Battle sometime in their past, Repentia Sisters seek to earn the Emperor of Mankind's grace once more through self-flagellation and finding a glorious death in the heat of battle.

Though ultimately outcasts within their own order, they are none the less revered by their fellow sisters, who see them as pilgrims seeking the absolution of death and ultimate sacrifice in the name of the God-Emperor.

Confession and prayer are as much a part of a battle-sister's existence as Bolter drills and military discipline. Those who fall short of the sisterhood's rigorous codes are subject to many penitential punishments, but in more serious cases they may even be exiled from their order.

These warriors, known as Sisters Repentia, band together into groups that seek redemption in the fires of battle. They are led to war by an unsparing religious fanatic known as a "Mistress of Repentance," who judges each exiled Sister's deeds and occasionally, at battle's end, may declare her sins atoned for. Those rare few who return to the fold of their Order Militant are held in awe by their fellows.

Those battle-sisters who seek forgiveness occupy a state of grace that many within the Adepta Sororitas aspire to, yet few attain. Indeed, some sisters willingly exile themselves, finding fault in the smallest transgression in order to join the Repentia.

The fervour of the Repentia inevitably means that they martyr themselves fighting against hopeless odds, finding in death the absolution denied to them in life.

The repentant battle-sister's squad members take the Penitent's wargear and cast it aside. They use the remnants of robes to roughly clothe the Penitent.

An oath of penance sets the Sororitas on a journey that is revered by the sisterhood even though the Repentia are set apart. As a penitent, only a few Sororitas ever interact with a Repentia outside of battle once she has taken her oath of repentence.

While separated from their sisters, the Repentia hold a special place of honour. Repentia face their inner daemons alone rather than risk others of the order. Those that fulfil the oath are often some of the most formidable warriors in the Adepta Sororitas and are treated with the utmost posthumous respect.

The exact process for taking an oath varies from order to order. In the Calixis Sector it is common practice that from the moment a Sororitas declares her intent to take the Oath of the Penitent, she is formally removed from the sisterhood and is taken to the chapel's sanctum.

The eldest heroine of the order removes the petitioner's armaments and ritually shaves her head in preparation for coming battle. The vestments of the Adepta Sororitas are replaced with the Robes of the Penitent, simple crème coloured robes with little protective value.

The chapel is then cleared of all other Sororitas and she is left alone with the eldest heroine. During this time, the heroine leads the Repentia through a series of litanies and oaths designed to stoke the raging fire of faith she will need to complete her task.

Sisters Repentia are fanatical warrior women who show no fear in battle and no remorse to those who blaspheme against the Golden Throne. Their single-minded devotion to the God-Emperor gives them protection against the Heretics they have been sent to destroy.

Only when a Sororitas sister feels she has something to atone for will she take an oath of penance. A martially-minded Inquisitor may find the unbreakable faith of these sisters a welcome addition to their retinue. 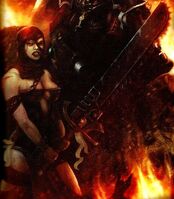 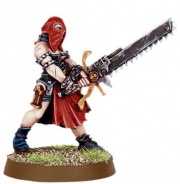 A Sister Repentia in combat. 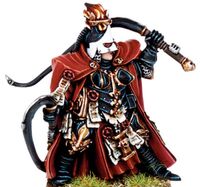 The Mistress of Repentance serves as the brutal and fanatical overseer of a squad of Sisters Repentia.

A squad of Sisters Repentia.

A Sister Repentia prepares to sell her life dearly against the forces of Chaos.
Español
Community content is available under CC-BY-SA unless otherwise noted.
Advertisement