The Sicaran Venator is a variant of the Sicaran Battle Tank and was designed near the end of the Great Crusade, just before the outbreak of the Horus Heresy in the early 31st Millennium, as a purpose-built tank destroyer for the Space Marine Legions.

The Sicaran Venator was highly valued by the Legiones Astartes for the combination of mobility and protection provided by the Sicaran Battle Tanks' chassis, and the potent firepower it could unleash in the form of its compact Neutron Laser Projector.

The Neutron Laser Projector is a formidable anti-armour weapon whose particle beam is capable of penetrating any known armour. Current Imperial records do not indicate whether or not the Sicaran Venator, or even the standard Sicaran Battle Tank, is still in use by any of the Chapters of the Adeptus Astartes or the Traitor Legions in the late 41st Millennium.

Conceived in the fires of war, the Sicaran Venator was the result of all the knowledge gleaned from the unnumbered battles of the Great Crusade. Its advanced Neutron Laser was specially designed to provide the Legiones Astartes with superior firepower, enabling it to destroy any and all xenos threats that might be encountered by the expanding armies of the nascent Imperium.

At the time Horus began his rebellion on the black fields of Istvaan V, the Sicaran Venator had only just entered full production and only limited numbers had inducted into the various Legions. Despite the relative rarity of these vehicles, their combination of durability, speed and firepower ensured that they proved pivotal in a number of battles, surviving where lesser Predator or Vindicator tanks did not.

The Sicaran Venator replaces the standard Sicaran Battle Tank's turret-mounted Accelerator Autocannons and hull-mounted Heavy Bolter with a hull-mounted Hadyxis Pattern Neutron Beam Laser. This weapon turns the Sicaran Venator into a formidable anti-armour vehicle that is capable of engaging nearly any target, as a Neutron Laser weapon's particle beam is capable of penetrating all known types of armour.

The vehicle is also armed with a single pintle-mounted, remote-controlled Heavy Bolter to engage infantry that gets too close and two sponson-mounted weapons, which can be either Heavy Bolters or Lascannons. The Sicaran Venator can also be outfitted with a Hunter-Killer Missile Launcher, Extra Armour Plating, a Dozer Blade, an Auxiliary Drive system, Extra Armour Plating, a Searchlight, or Smoke Launchers.

A Relic Sicaran Venator is armed and equipped with:

A Relic Sicaran Venator can also take one of the following additional pintle-mounted weapons:

A Relic Sicaran Venator may also be armed with the following sponson weapons:

Relic Sicaran Venators may also have vehicle equipment such as:

During the Great Crusade and Horus Heresy the Sicaran Venators of the Legiones Astartes featured different weapons loadout options than those still found during the 41st Millennium.

A standard Legion Sicaran Venator is armed and equipped with:

A Legion Sicaran Venator also take one of the following additional pintle-mounted weapons:

A Legion Sicaran Venator may also be armed with the following sets of sponson weapons, two weapons per set:

Legion Sicaran Venators may also have a variety of vehicle equipment such as: 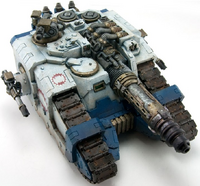 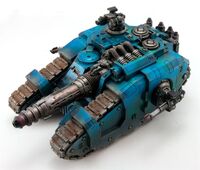 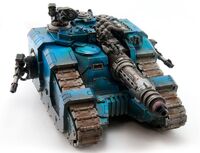 A Sicaran Venator of an unknown Legion during the Horus Heresy

A Sicaran Venator of the Ultramarines Legion during the Horus Heresy
Español
Community content is available under CC-BY-SA unless otherwise noted.
Advertisement