The Sicaran Omega Tank Destroyer, or simply the Sicaran Omega is a variant of the standard Sicaran Battle Tank. The Sicaran Battle Tank was an Imperial main battle tank and one of the most advanced armoured vehicles used by the Space Marine Legions during the Great Crusade and the Horus Heresy in the late 30th and early 31st Millennia. Retrofitted to allow the Sicaran hull to carry heavier firepower, the Omega variant is a formidable tank hunter.

The Omega utilises the speed provided by the Sicaran's engines to apply overwhelming short range firepower in battle, racing forwards to ambush and obliterate the lumbering siege tanks of enemy columns. The Sicaran Omega is not the only tank hunter variant of the Sicaran,as the Ventaor variant is also armed with anti-tank weaponry, though the Venator is much more suited to destroying enemy heavy armour and super-heavy vehicles.

In the 41st Millennium

The Sicaran Omega Tank Destroyer, like the base Sicaran and its myriad variants are now a long-forgotten part of the Imperium's distant past. These vehicles are only now found deep within the relic chambers of those few Adeptus Astartes Chapters that are lucky enough to possess them at all. The tank's Machine Spirit (artificial intelligence) slumbers fitfully in its relic chamber and when awoken appears haunted by the dire events of the Horus Heresy.

The Sicaran Omega possessed some of the most advanced and therefore ill-understood machine systems, and it is the subject of deep-rooted awe and superstition, even amongst the most venerable Masters of the Forge. Even when held in stasis, the Sicaran Omega must be ministered to constantly by its overseers, never less than a score of servo-lectors combining their efforts to ensure the machine's continued rest, as should the Sicaran Omega awake before being called, its Machine Spirit is prone to behave in an unpredictable manner.

The Sicaran Omega is armed with a turret-mounted Omega Plasma Array. The Omega Plasma Array is a simplified, and sometimes considered crude, over-sized copy of the ancient Mechanicum's Plasma-fusil Weaponry, a stopgap and imperfect copy that was nonetheless capable of being produced by the lesser forges attached to many Space Marine Legion strongholds, allowing them to replace losses of more complex vehicles. These weapons relied on the brutal application of overwhelming force to reduce enemy armour to wrecks instead of the precise annihilation of more advanced weapons systems. The Omega Plasma Array is capable of focusing and projecting a highly pressurised stream of volatile and highly charged plasma, vaporising outer armour layers and literally burning through an enemy tank's defences. The weapon is capable of firing either as a volley of plasma bolts, or as a sustained burn which can quickly rip through multiple layers of armour plating, at the expense of potentially overheating the weapon.

The highly charged plasma utilised by the Sicaran Omega is contained at pressures that are difficult to regulate for even the most skilled Techmarines, and even a slight miscalculation can lead to disaster. When such an engine suffers a catastrophic breach, the destruction wrought is far more terrible than for other vehicles of its class. The Sicaran Omega is also armed with a hull-mounted Heavy Bolter and two sponson-mounted weapons, which can be either Heavy Bolters or Lascannons. The vehicle can also be outfitted with a Pintle-mounted Weapon, a Hunter-Killer Missile Launcher, Extra Armour Plating, a Dozer Blade, an Auxiliary Drive System, Armoured Ceramite Plating, a Searchlight, or Smoke Launchers.

A standard Relic Sicaran Omega is armed and equipped with:

A Relic Sicaran Omega Tank Destroyer may also be armed with the following sponson weapons:

A Relic Sicaran Omega may take one of the following pintle-mounted weapons:

Relic Sicaran Omega Tank Destroyers may also have a variety of vehicle equipment such as:

During the Great Crusade and Horus Heresy the Sicaran Battle Tanks of the Legiones Astartes featured different weapon loadout options than those relics still found in the 41st Millennium.

A standard Legion Sicaran Omega is armed and equipped with:

A Legion Sicaran Omega Tank Destroyer may also be armed with the following sponson weapons:

A Legion Sicaran Omega may take one of the following pintle-mounted weapons:

Legion Sicaran Omega Tank Destroyers may also have a variety of vehicle equipment such as: 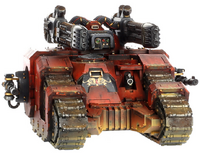 A Sicaran Omega Tank Destroyer of the Blood Angels Legion, left-side view
Add a photo to this gallery
Retrieved from "https://warhammer40k.fandom.com/wiki/Sicaran_Omega_Tank_Destroyer?oldid=346342"
Community content is available under CC-BY-SA unless otherwise noted.