The Sicaran Battle Tank was an Imperial main battle tank and one of the most advanced armoured vehicles used by the Space Marine Legions during the Great Crusade and the Horus Heresy in the late 30th and early 31st Millennia.

These powerful vehicles were exclusive to the armouries of the Legiones Astartes and were just in the process of being introduced as a standard vehicle of the Legions when the Horus Heresy broke out. This allowed the Warmaster Horus to ensure that many examples of the new tank found their way only into the armouries of those Space Marine Legions that would side with him before the outbreak of his rebellion against the Emperor of Mankind.

In the 41st Millennium, many Adepts of the Machine God deny that the Sicaran is anything but a myth, an imagined or at best half-remembered phantom of an age long ago shrouded in blood and shadow. Others, especially more senior Techmarines, know that the Sicaran is real and once served the Legiones Astartes as they prosecuted the wars of the Great Crusade.

The Sicaran Battle Tank was the exclusive province of the Space Marine Legions and was considered one of the most advanced armoured units in the arsenal of the Great Crusade. Its introduction was on-going at the outbreak of the Horus Heresy, and the Warmaster Horus ensured that many examples of this new vehicle found their way into the armouries of those Legions that would side with him before the outbreak of the interstellar civil war.

Designed in concert between the Primarchs Ferrus Manus and Roboute Guilliman of the Iron Hands and Ultramarines Legions, respectively, alongside the Magi of the Mechanicum's Tempestora Sect, the Sicaran utilises component technologies from various STC patterns such as the Rhino, Land Raider and Hephaestus to create a high-speed "destroyer" tank that can complement the more commonplace Predator and Land Raider designs.

The primary armament of the main Sicaran variant was the sophisticated Herakles pattern Accelerator Autocannon. Technologically akin to the heavier calibre ordnance mounted on the Fellblade super-heavy tank, it was a superior rapid-firing and highly accurate weapon. It fired shells at far higher velocities than a standard Autocannon, enabling it to successfully track and engage swift-moving targets and pinpoint vulnerabilities in enemy armour with lethal precision.

The Sicaran Battle Tank is one of the rarest of sights on the blood-soaked battle grounds of the late 41st Millennium, for precious few examples of this highly-advanced, and ill-understood, engine of war survived the Horus Heresy. Some tech-savants hold that the Sicaran was the most common of a family of armoured vehicles that entered service at the end of the Great Crusade, and that it was commissioned by the genius of no less a being than one of the Emperor's Primarchs.

If this is true, it reveals a dark heritage indeed, for it appears that those Legions that remained true to the Emperor received scant quantities of the Sicaran, while those who stood by the Warmaster received the vehicle in greater numbers. So rare is the Sicaran, in fact, that numerous Tech-priests and even Techmarines hold that it is nothing but a myth. Others link it to the enduring legacy of Arkhan Land, identifying the Sicaran as the nigh mythical missing link between the Predator and the Land Raider.

Those few Adeptus Astartes Chapters in possession of the Sicaran know that its Machine Spirit slumbers fitfully in their relic chambers and when awoken appears haunted by the dire events of the Horus Heresy. The Sicaran is possessed of the most advanced and therefore ill-understood machine systems, and it is the subject of deep-rooted awe and superstition, even amongst the most venerable Masters of the Forge.

Even when held in stasis, the Sicaran must be ministered to constantly by its overseers, never less than a score of servo-lectors combining their efforts to ensure the machine's continued rest, as should the Sicaran awake before being called, its Machine Spirit is prone to behave in an unpredictable manner.

Some witnesses of such a premature awakening have reported a baleful, all-too aware glow emanating from the vehicle's cyclopic primary Auspex block. Others have heard garbled battle-cant from an age long passed sputtering from its Vox systems, clipped orders and vengeful oaths flying back and forth across a non-existent Vox net using terms unknown to the warriors of the 41st Millennium.

Stasis chambers housing slumbering Sicaran battle tanks are therefore commonly sealed with the most potent of wards, their blast doors smothered in blessed wax and fluttering Purity Seals, and the air all about is heavy with the most sacred of incense and continuous chants of the servo-lectors echo down passageways where few dare to tread without the express leave of the Master of the Forge.

Restlessness and baleful Machine Spirits must be equally true of those Sicaran Battle Tanks in the possession of the Chaos Space Marines, yet the effect must be magnified by the fact that many reside within the Eye of Terror and other Warp-touched realms, or upon the surfaces of Daemon Worlds. Where the Techmarines of the Adeptus Astartes go to great lengths to ward their fellow Sicaran Battle Tanks from baleful influence, the Warpsmiths of the Chaos Space Marines are unlikely to feel constrained by such concerns and they may even expose their charges to the unadulterated taint of the Ruinous Powers with deliberate intent.

The Machine Spirits inhabiting Chaos Sicaran Battle Tanks must be hateful things indeed, possessed of a darkly self-aware anima forged in the crucible of the Ruinous Powers. Some hold that such spirits require constant supplication and appeasement, lest they turn upon their crew or their allies, and certainly the archives of the Inquisition include accounts and pict-captures of Sicaran Battle Tanks whose flanks gleam with dark arterial blood applied in ritual patterns that strike terror into the hearts of all who lay their eyes upon them.

This allows the Sicaran to engage swiftly moving enemy vehicles and pinpoint vulnerabilities in their armour with lethal precision. The Sicaran is also armed with a hull-mounted Heavy Bolter and two sponson-mounted weapons, which can be either Heavy Bolters or Lascannons. The vehicle can also be outfitted with a Hunter-Killer Missile Launcher, Extra Armour Plating, a Dozer Blade, an Auxiliary Drive System, armoured ceramite plating, a Searchlight, or Smoke Launchers.

A Relic Sicaran Battle Tank is armed and equipped with the following:

A Relic Sicaran Battle Tank may take one of the following pintle-mounted weapons:

A Relic Sicaran Battle Tank may also be armed with the following sponson weapons:

Relic Sicaran Battle Tanks may also have vehicle equipment such as:

During the Great Crusade and Horus Heresy the Sicaran Battle Tanks of the Legiones Astartes featured different weapon loadout options than those still found during the 41st Millennium.

A standard Legion Sicaran Battle Tank is armed and equipped with:

A Legion Sicaran Battle Tank may take one of the following pintle-mounted weapons:

A Legion Sicaran Battle Tank may also be armed with the following sets of sponson weapons, two weapons per set:

Legion Sicaran Battle Tanks may also have a variety of vehicle equipment such as:

The Sicaran Battle Tank, like many other Imperial vehicles, possessed many different variants. These include:

An unmarked Pre-Heresy Sicaran Battle Tank believed to belong to the Alpha Legion. 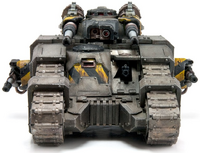 A Sicaran Battle Tank of the Iron Warriors Legion, front-view.

A Sicaran Battle Tank and Deimos Predator Executioner of the Iron Warriors.Legion; the Sicaran is much larger than the Predator tank. 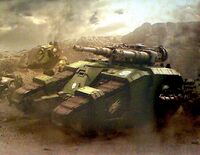 An ancient pict-capture of a Word Bearers Legion Sicaran Battle Tank, Animas Exuro, present at the betrayal on Calth.

A Black Templars Space Marine Chapter Relic Sicaran Battle Tank, Hero of Kryenia; Chapter legend holds that this venerated battle tank took part in the defence of the Imperial Palace, serving under Sigismund himself; it was later ceded to the newly-formed Black Templars Chapter.

An Ultramarines Space Marine Chapter Relic Sicaran Battle Tank, Hentor of Gage; this honoured vehicle is known to have taken part in the Battle of Calth, but Chapter legend holds that it must only ever be withdrawn from its stasis chamber in the direst of circumstances.

A Chaos Relic Sicaran Battle Tank of the Emperor's Children Traitor Legion; encountered amongst the hosts of Abaddon the Despoiler during the Gothic War.

A Chaos Relic Sicaran Battle Tank of the Tenebrae Renegade warband; this vehicle, the Suspira Mortis, is believed to have taken part in the silencing of the fourteen beacon-worlds of the Argentus sub-sector.

A Sicaran Battle Tank of the Ultramarines Legion during the Horus Heresy.

A Sicaran Battle Tank of the Alpha Legion during the Horus Heresy.

A Sicaran Battle Tank of the Iron Warriors Legion during the Horus Heresy. 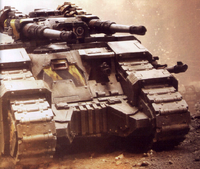 A Sicaran Battle Tank of the Iron Warriors Legion during the Horus Heresy.
Español
Community content is available under CC-BY-SA unless otherwise noted.
Advertisement