The Sicaran Arcus variant is one of the more unusual tanks that was available to the Space Marine Legions during the final days of the Great Crusade, along with several other Sicaran variants. Similar to the malevolent Dreadclaw Drop Pod and the sinister Cerastus Knight-Atrapos, the Arcus Strike Tank has a shadowed past, viewed by the Mechanicum for reasons unknown as a slight against the Omnissiah.

As a result, the current Adepts of the Machine God refuse to produce or repair these vehicles and without their ministrations, these advanced support platforms have degenerated, their advanced armaments replaced with more common rotary launchers and the stocks of its rare warheads having dwindled away.

The Arcus Strike Tank was originally part of a program once initiated by the Primarch of the Ultramarines Legion, Roboute Guilliman, who sought to grant a Legion strike force access to highly specialised weapon systems without the need to employ numerous vehicles for each role.

The Sicaran hull was chosen to mount the newly developed Arcus Launcher, which was capable of deploying with a wide range of warheads, each crafted to fulfil a distinct tactical niche during combat. The Arcus was intended to become the cornerstone of a new tactical doctrine the Master of Ultramar had begun to formulate, allowing small Legiones Astartes forces to operate without extensive support and in smaller numbers than during the Great Crusade.

Despite production of the Arcus being limited to a few prototype vehicles at the onset of the Horus Heresy, and the doctrinal issues that kept it out of production on most major Forge Worlds, a number of Legion homeworlds produced small numbers of this variant. Of particular note is the inclusion of the Neutron-flux Warheads, a Terran development dating back to the years prior to Terra's alliance with Mars. This weapon saturates the silica stratum of the Cybernetica Cortex employed by Mechanicum Automata with xenon, causing terminal cascade failures in those systems. The continued production of these weapons is believed to be the cause of the Mechanicum's refusal to sanction the Arcus Pattern and its belief that the variant was heretical, and its inevitable downfall.

In the 41st Millennium

The Arcus Strike Tank, like the base Sicaran and its myriad variants are now a long-forgotten part of the Imperium's distant past. These vehicles are only found now deep within the relic chambers of those few Adeptus Astartes Chapters that are lucky enough to have them at all. Its Machine Spirit (artificial intelligence) slumbers fitfully in the relic chambers where it is kept, and when awoken appears haunted by the dire events of the Horus Heresy.

The Sicaran Arcus is possessed of some of the most advanced and therefore ill-understood machine systems, and it is the subject of deep-rooted awe and superstition, even amongst the most venerable Masters of the Forge. Even when held in stasis, the Sicaran Arcus must be ministered to constantly by its overseers, never less than a score of servo-lectors combining their efforts to ensure the machine's continued rest, as should the Sicaran awake before being called, its Machine Spirit is prone to behave in an unpredictable manner.

When the Arcus is used by the Space Marine Chapters that retain examples of this rare pattern in the 41st Millennium, it can be found racing forwards to saturate a target area with incendiary devices of a more commonplace provenance and using its renowned speed to escape unscathed, enabling them to clear otherwise redoubtable bunkers and fortresses with brutal efficiency.

The Arcus Strike Tank was one of the most advanced support platforms available to the Space Marine Legions during the Great Crusade, however without the support of the ancient Mechanicum to produce and repair the vehicle's Arcus Launchers they were eventually replaced with more common Rotary Missile Launchers.

The original Arcus Launchers were capable of deploying a wide range of warheads, each crafted to fulfil a distinct tactical niche during combat. Without the Mechanicum's continued support it is assumed that very few, if any original Arcus Launchers still exist in the 41st Millennium, and that any Arcus Strike Tanks that are still usable are all armed with Rotary Missile Launchers.

The Sicaran Arcus is also armed with a hull-mounted Heavy Bolter and two sponson-mounted weapons, which can be either Heavy Bolters or Lascannons. The vehicle can also be outfitted with a Pintle-mounted Weapon, a Hunter-Killer Missile Launcher, Extra Armour Plating, a Dozer Blade, an Auxiliary Drive System, Armoured Ceramite Plating, a Searchlight, or Smoke Launchers.

A standard Relic Sicaran Arcus is armed and equipped with:

A Relic Sicaran Arcus Strike Tank may also be armed with the following sponson weapons:

A Relic Sicaran Arcus may take one of the following pintle-mounted weapons:

Relic Sicaran Arcus Strike Tanks may also have vehicle equipment such as:

During the Great Crusade and Horus Heresy the Sicaran Battle Tanks of the Legiones Astartes featured different weapons loadout options than those still found during the 41st Millennium.

A standard Legion Sicaran Arcus is armed and equipped with:

A Legion Sicaran Arcus Strike Tank may also be armed with the following sets of sponson weapons, two weapons per set:

A Legion Sicaran Arcus may take one of the following pintle-mounted weapons:

Legion Sicaran Arcus Strike Tanks may also have a variety of vehicle equipment such as:

A Legion Sicaran Arcus armed with an Arcus Launcher may also have a variety warheads such as: 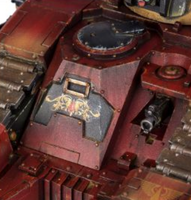