Shuriken Weapons are the primary type of anti-personnel weapons used by the Aeldari. Utilising gravitic pulses, a mono-molecular disc of plasti-crystal taken from the weapon's magazine is accelerated down the barrel of the weapon, hurling it at the target at incredible velocity. The accelerator creates a peristaltic shift from the front to the rear of the firing chamber, hurling the shuriken missiles forward at a tremendous velocity. A burst of several missiles can be fired in a fraction of a second in this way.

The weapon's magazine is then pushed up by a degree of nanometers and the cycle repeats. Shuriken Weapons have an unknown rate of fire but it is estimated to be greater even than the Imperial Assault Cannon, with each magazine of a Shuriken Catapult essentially consisting of thousands of rounds.

Shuriken projectiles are razor-sharp monomolecular-edged discs of plasti-crystal, and are usually star-shaped, triangular or circular. A shuriken disc can slice straight through flesh and bone, and can penetrate a considerable thickness of metal or plasteel armour. A single solid core of plasti-crystal material is used as ammunition. As the weapon is fired, high-energy impulses from the back of the weapon form the individual shuriken missiles by splitting the ammunition core. This weapon principle produces a very high rate of fire, allowing the weapon to fire up to a hundred rounds in one or two seconds and each ammunition magazine is good for around 10 of these bursts.

The disadvantage of Shuriken Weapons is that the lack of rifling in a Shuriken weapon's barrel reduces the weapon's accuracy drastically, thereby reducing its maximum range to one well under that of its solid slug ballistic counterparts. The Aeldari minimise this disadvantage by utilising their own natural speed and their vehicles' lightning quick acceleration to close the distance with their enemies.

Shuriken Weapons are manufactured by the Aeldari in three separate forms: Shuriken Pistols used by various Aeldari commanders and specialist units, Shuriken Catapults which take the form of two-handed rifles-type weapons and are the primary weapon of most Aeldari warriors, and Shuriken Cannons that are heavy weapons mounted on Aeldari defence platforms, vehicles and aircraft.

The Shuriken Pistol, known in the Aeldari Lexicon as murekh, is a smaller one-handed pistol version of the Shuriken Catapult. Amongst humans these weapons are sometimes referred to as "slingers" or "sling pistols." The shorter barrel length and smaller capacity reduces the weapon's efficiency and so limits the range, rate of fire and power.

The shurikens it fires are identical to those used in the larger weapon; a spinning disc which can slice straight through flesh and bone. Certain Aeldari heroes and warriors, such as Striking Scorpion Aspect Warriors, use Shuriken Pistols as their main weapon. Other Aeldari units usually use them as secondary backup weapons.

The Shuriken Catapult, or tuelean in the Aeldari Lexicon, is the primary infantry weapon of Aeldari Guardians. Like much of the technology of the Aeldari, Shuriken Catapults are grown from the same psychoactive Wraithbone that forms the physical shell of the Craftworlds. A specialised subset of Bonesingers, taken from those who have previously walked the Path of the Warrior, are tasked with crafting the weapons used by those who would defend their home.

All citizens of the Craftworlds are trained in the use of the Shuriken Catapult as part of their preparation to form the Guardian militia in times of conflict. In the age of constant war that is the 41st Millennium, most Craftworlds are forced to become better acquainted with these lethal weapons than many of them would like.

Most commonly Dire Avengers use these weapons in aimed semi-automatic fire, but in the heat of an assault or a close-range firefight, the weapon's full automatic function can empty its magazine in just four seconds. Their Phoenix Lord Asurmen wields a a unique variants of this weapon connected to both of his vambraces.

The Gatekeeper's Bastion is a modified Dire Avenger Shuriken Catapult made with fortification and protection against environmental conditions in mind for when Aeldari deploy into a variety of climates across countless worlds. The model includes reinforced casing around the barrel and magazine, and an augmented scope/range finder built with penetrating hostile planetary conditions as its primary function (snow storms, sand storms, etc.). The reinforced casing makes for a much more solid impact if the Aeldari is forced to strike a target in melee, and its seals make it far less prone to clogging and jamming in the worst environments.

A Shrieker Cannon, known as buanna in the Aeldari Lexicon, is an upgraded version of the standard Aeldari Shuriken Cannon. Utilised exclusively by the macabre Harlequin Death Jesters, these weapons are infinitely more cruel than a typical Shuriken Cannon, as Shrieker Cannons fire projectiles impregnated with virulent genetic toxins known as Margrech, which turn the luckless victim into a walking bomb.

The special Shrieker ammunition is hollow and contains a genetically tailored enzyme-based serum. As the missile hits its target, the centripetal forces created by the spinning disc force the toxin through microscopic holes in the shuriken's spines and into the target. The serum works in a very complex and unpleasant manner, combining with the victim's own genetic material, twisting and distorting tissues, and causing organs to to malfunction in a spectacular fashion. Eventually the victim is driven into a violent delirium as the serum reaches his brain and he loses control of his body.

Afterwards the pace of the constantly replicating genetic serum reaches a fever pitch as the blood boils, organs rupture and flesh sears from within, before the victim explodes with sickening violence. The characteristic shrieking noise of these rounds is caused by the rush of air into the hollow missile as serum is forced into the victim. This noise has prompted Imperial troops to give the weapon its name "Shrieker."

The large Shuriken Cannon works in a similar way to the Shuriken Catapult, but has an ammunition coil to load the weapon more quickly and uses a triple accelerator field for improved rate of fire and power. While the Shuriken weapons above are all hand-held weapons, the Shuriken cannon is very large and needs stabilising gyroscopes to allow any accuracy. They are generally only ever found mounted on Guardian heavy weapon platforms and Aeldari vehicles. 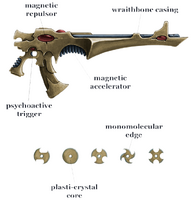 An Ordo Xenos schematic of a Shuriken Catapult and examples of monomolecular ammunition.

A deadly Shrieker Cannon of the Harlequin Death Jester.

An Ordo Xenos schematic of a Shuriken Cannon.
Español
Community content is available under CC-BY-SA unless otherwise noted.
Advertisement