A Shoota is a kinetic, automatic ballistic weapon used by the Orks that is chosen not for its efficiency but for the amount of noise it makes and the amount of damage it can do. The best Shootas are deafening and deadly in equal measure.

There is no standard design for a Shoota, as most are hand-crafted by Mekboyz and "kustomized" by their owners, so although they may conform to a general pattern, no two Shootas will look the same. A Shoota fires either massive, large calibre bullets or explosive shells, or even a mixture of both.

As is the case with most Ork weapons, Shootas are crude but surprisingly effective. A Shoota is considered a good weapon by a Greenskin if it fires a burst of shots at once and makes a lot of noise. A loud noise is very important in any consideration of the quality of a Shoota, as many Orks believe that the louder a weapon is, the greater damage and range it possesses. Orks that enjoy shooting often acquire Shootas and form up mobs of so-called "Shoota Boyz."

Like the Slugga, Shootas are not very accurate. This suits the Orks just fine since they seem less interested in accuracy than in causing damage and raising a ruckus. The noise of a Shoota will give Orks a morale boost and can cause enemies to lose their morale and retreat from the overpowering noise of dozens of Shootas. None the less, mobs of Shoota Boyz make up for their lack of accuracy with the sheer volume of fire directed at their targets.

Because of Mekboyz's constant struggle to outdo each other, shootas may vary in appearance, but they usually have comparable performance, unless they have received a "kustom job" from a particularly inventive Mekboy. Shootas are very common and as such are often combined with other weapons to make an Ork Kombi-Weapon.

Shootas are the Ork equivalent to the standard Space Marine Bolters. Essentially a machine gun (most even look like early World War I machine guns), the Shoota is the weapon any Ork looks to acquiring when he wants "moar dakka." Mobs of Slugga Boyz will often have a few Boyz armed with Shootas to add a little extra sting, but entire mobs of Shoota Boyz are also common; foot-slogging across the field sending torrents of bullets at any enemy in range. An Ork mob may trade in their Sluggas and Choppas for a Shoota if the technology and materials are available.

A Big Shoota is a loud, heavy, large-calibre machine gun that bucks and sparks when the trigger is pulled. It is simply a larger caliber version of the standard Shoota, and has greater range and damage potential. A Big Shoota is also often fitted with an attached bayonet for melee. It is essentially the Orks' most common heavy weapon.

Big Shootas are often "kustomized" by their Greenskin owners to have multiple barrels, large crosshair sights, longer, more impressive ammunition belts and other advancements that make it a more effective and deadly weapon.

A Big Shoota has twice the range of a regular Shoota. Big Shootas are also less prevalent on the battlefield, as on average there is only one Ork armed with a Big Shoota for every 10 Orks in a mob, up to an average of three Big Shootas in a mob of 30 Ork Boyz.

With this weapon, the Orks appear to be utilising tracer round technology. It provides extremely rapid fire, even for an Ork weapon, but the Iron Sight Shoota's accuracy seems to be markedly improved by the use of red tracer ammunition. The Ordo Xenos has launched an inquiry into whether or not these are some sort of sorcerous ammunition rounds.

The capture of one of these weapons has been authorised by Imperial high command for examination by the Adeptus Mechanicus. They can be located easily on the battlefield by the metallic sound they make, which is lower-pitched and produces more of an echo than standard Ork automatic weapons.

Dakkaguns are a twin-linked variant of a Big Shoota that are mounted on Ork Warbikes. They have two barrels and a shorter range because of their unstable mounting, but otherwise are identical to Big Shootas. Because they are mounted on a small, light vehicle, the kickback from the weapon can make the Warbike spin out of control when fired. However, from the Ork point of view, such an exciting outcome makes riding a bike even better.

The Supa-Shoota is a much larger and louder version of the Big Shoota that is particularly favoured by Ork Flyboyz. Often mounted on Greenskin aircraft like Dakkajets or Blitza-Bommers, they are "kustomized" by their Flyboyz to make a bigger bang and cause even more damage when unleashed.

Ork Mekboyz often "kustomize" their Shootas by adding an additional barrel for more firepower. These kustom Shootas cost their clients much more teef than the usual Shoota, and are often utilised by both Ork Nobs and Warbosses. Often times these deadly weapons are incorporated into Mega Armour.

A Kannon is a simple Ork firearm often produced in large numbers due to their lack of sophistication. They are extremely thick-barreled weapons that fire large shells stored in an attached magazine.

Some Kannons are single-shot weapons that have to be reloaded before every use. Kannons are much less popular among Orks because they are very slow to fire, take a longer time to load between shots and are extremely inaccurate even by Greenskin standards.

However, they are very large weapons that produce a terrific boom and look intimidating with their large muzzles, so they still sometimes appeal to certain Ork Boyz.

Also sometimes called a "Spechul Shoota", an Ork Blunderbuss is actually a variation of the Kannon, often constructed from the remains of a Kannon that backfired and destroyed its oversized barrel.

A Blunderbuss possesses a much shorter muzzle and its ammunition is composed of shells that have been created by mashing together dozens of individual pellets. When fired, the Blunderbuss unleashes a cloud of these pellets much like a crude Shotgun, which make it easy to hit a target at extremely close range.

Beyond that range, however, the weapon quickly loses most of its stopping power. The Blunderbuss is very cheap to manufacture, however, and can be used as a cheap, mass-produced weapon by those Ork tribes which may be on the lower end of the technological scale.

A trio of Ork Shoota variants 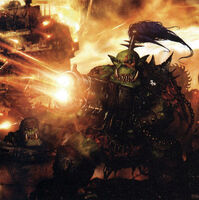 An Ork firing a Twin-Linked Shoota 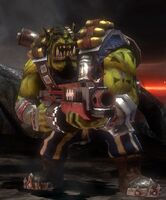