"Ours is the duty absolute. Ours is the vigil that must never end. Ours is the timeless honour, the willing sacrifice, the penitence enduring. We stand a watch that will never be relieved, and we stand it gladly out of adoration for he who gave us life, and whose life we must, in turn, preserve. We will never earn absolution, for we do not deserve it, but those who believe that would give us pause are fools."

A Shield-Captain is a senior rank held by a veteran of the Adeptus Custodes, the elite bodyguard of the Emperor of Mankind. The rank of "Shield-Captain" is a generalisation used when referring to one of the senior officers within the Adeptus Custodes, as the upper command of this elite paramilitary organisation is far from transparent to outsiders.

The warriors of the Adeptus Custodes disregard the idea of blind obedience, and look with disdain upon those who follow the orders of their superiors without question. After all, it was this very practice within the Legiones Astartes that allowed the Horus Heresy to occur.

Every Custodian has a voice, and is expected to use it. As such, the Ten Thousand respect only those leaders who have proved themselves worthy, whose judgement, strategic skill and strength of mind and character have been shown time and again. Such Custodians are called Shield-Captains, and their fellows follow them with loyalty and dedication.

"We are vigilance unending. We are duty unstinting. We are punishment inescapable. We are the Adeptus Custodes, and all must fear our wrath."

Within the ancient Legio Custodes, there existed a range of ranks and seniority of commands, far from transparent to outsiders, to which the more general application of "Shield-Captain" was applied, though within the Legio such ranks ranged from Prefect to Lictor, Proconsul to Tribune, following the ancient patterns of Terra's lost history. Elevated both through the trust held among their peers for their judgement and skill, but first and foremost advanced by the direct approval and in some cases intervention of the Emperor Himself, these were warriors not only of consummate and superhuman ability, but also rare insight, acumen and knowledge.

Afforded the rarest and finest of the Imperium's arms, each of these legendary fighters commanded the Legio Custodes against all manner of threats against the Emperor, His works and His domains, and whether their command concerned a dozen of their brethren detached to stand beside one of the Space Marine Legions during the Great Crusade and Horus Heresy in battle, or a thousand-strong Shield Company paved the way for the Emperor to walk upon some world of the dark frontier, they bore with them the might and power of their Legio manifested in a single indomitable warrior.

In the 41st Millennium, the rank of Shield-Captain is still utilised by the Adeptus Custodes. These individuals are amongst the greatest assets of the Imperium. They are superlative warriors who are able to take on an entire squad of Heretic Astartes in close combat, strike the heads from xenos beasts the size of tanks, and fell rank after rank of lesser enemies with pinpoint fire. Whether they hack their enemies apart with powerful swings of a Castellan Axe, slice and stab with a Sentinel Blade, or impale their victims upon a crackling Guardian Spear, Shield-Captains display absolute mastery of their chosen weapons.

Some -- the swiftest in thought and action -- soar into battle in the saddle of a Dawneagle Jetbike. Others -- those of an especially bellicose and aggressive temperament -- favour teleporting to war clad in Allarus Terminator Armour, there to cut down the enemy's leaders and send their underlings fleeing in terror. Whatever their preference, Shield-Captains are the masters of those disciplines required to become heroes of legend.

More than just exceptional fighters, Shield-Captains are highly intelligent and tactically-gifted battlefield commanders, able to read the ebb and flow of the wider war at a glance and direct their forces accordingly. A great weight of responsibility is placed upon the shoulders of these warrior lords, for to squander the Emperor's personal guards is an unforgivable sin. They know neither fear nor self-doubt, and can appear arrogant and aloof to other warriors of the Imperium. This is a misconception, however, for Shield-Captains are untroubled by such self-serving notions as egotism. They are absolute realists, fully aware of the stakes involved in the wars they wage. They act accordingly, every statement declarative, every action decisive, suffering no impediment to their mission - be it the machinations of the foe or the pomposity, ignorance or superstition of their allies.

This is not to say that Shield-Captains lack for charisma. Rather, they exude it. To the common soldiery of the Imperium these gilded figures seem to have stepped from the pages of religious scripture. Their presence fills faithful men and women with rapturous euphoria, banishing fears and doubts, replacing them with the absolute certainty that the Emperor watches over His servants and will preserve their souls should they fall in battle that day. Shield-Captains are also master diplomats, well-versed in the intricacies of Imperial high society, privy to secrets and traditions that allow them to charm, inspire, threaten and manipulate as required to see their will done.

The rank of Shield-Captain is a purely martial one. It signifies that the Custodian in question has the responsibility of leading a force of his comrades into battle. Beneath that umbrella honorific are hundreds of more symbolic or traditional titles. Some are retained only as long as a duty or position is fulfilled, while others are kept in perpetuity. Titles such as Aquila Commander, Justus Supreme or Emperor's Headsman are amongst the former, and correspond to guardianship of sections of the Imperial Palace or duties upon the field of battle. Conversely, a Custodian who has stood amongst the Companions will forever be known as Honoured Watchman, while one who has triumphed in a Blood Game will forever after bear the title of Shieldsmith.

When the Custodians march to war, it is not unusual to see multiple Shield-Captains leading them in battle. Sometimes these warriors fight alongside each other -- groupings such as the Golden Brothers or the Heralds Three have won remarkable renown through their impressive accomplishments. At other times, one amongst the Shield-Captains' number will assume overall command of an especially important mission, his peers lending him their martial prowess and strategic counsel. The decision of who leads at such times is rarely difficult, for the Shield-Captains are frank in discussing their respective merits and quick to recognise whether they, or one of their fellows, is the appropriate choice. So do Shield-Captains epitomise their organisation's pragmatic approach to achieving victory in the Emperor's name.

In the Horus Heresy era, the Shield-Captain may replace their Guardian Spear with one of the following options:

In the Horus Heresy era, the Shield-Captain may take the following optional wargear:

A Shield-Captain of the Legiones Custodes

Custodian Warden Shield-Captain, armed with a Guardian Spear and Misericordia. 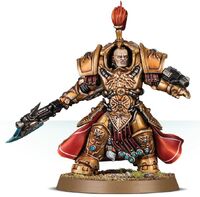 A Custodian Shield-Captain arrayed in Allarus Pattern Terminator Armour and armed with a Castellan Axe and forearm-mounted Balistus Grenade Launcher.

An Adeptus Custodes Shield-Captain mounted on a Dawneagle Jetbike and armed with an Interceptor Lance
Add a photo to this gallery
Retrieved from "https://warhammer40k.fandom.com/wiki/Shield-Captain?oldid=339517"
Community content is available under CC-BY-SA unless otherwise noted.