"You pick the gate, sir, and my old girl will peel it open! You'll see!"


— Colonel Kotchakis Vinnmann of the 81st Armoured Cadian Regiment praising his Shadowsword, the Angel of the Apocalypse

The Shadowsword is the sister tank of the more common Baneblade super-heavy tank of the Astra Militarum. The Shadowsword is a nearly identical super-heavy tank to the Baneblade with the exception of its armament and battlefield role as a Titan-killer. Armed with a massive forward-firing gun known as a Volcano Cannon the Shadowsword's primary focus during combat is the destruction of enemy Titans. The Shadowsword and Baneblade have been fighting alongside the forces of Mankind since the Dark Age of Technology, thus making it one of the oldest tank designs still in regular use by the Imperium. Each Shadowsword uses ancient Standard Template Construct (STC) designs that only a handful of Adeptus Mechanicus Forge Worlds have at their disposal. Each Shadowsword is individually logged, registered, and tracked on Mars, not only to see where it is but to see where it has been and the honours it has received, as a Shadowsword's deeds are celebrated as if they were those of a favorite child amongst its makers. The Shadowsword is a highly prized addition to any armoured regiment of the Imperial Guard.

Where many super-heavy vehicles excel in protracted battles, their thick armour allowing them to outlast endless waves of enemies, the Shadowsword is designed to bring a swift and crushing end to the opposing army. Equipped with a hull-mounted Volcano Cannon, among the largest weapons ever fitted to a tank, the mere appearance of a Shadowsword on the battlefield spells doom for the enemies of the Imperium.

As a Shadowsword speeds forward, the roar of massive engines is drowned out by the whir of its Volcano Cannon powering up. The ruby beam of laser light that it fires pierces the thick smog of battle, blasting through infantry, armour and xenos monstrosities with ease. Even Aeldari Wraithknights, Tyranid Bio-Titans and Ork Gargants can be toppled by a single, direct hit from a Shadowsword.

The Shadowsword and Baneblade were both originally created sometime during the Dark Age of Technology and were intended to add a staggering amount of firepower to any army. The Shadowsword was one of the most potent armour destroyers in the arsenal of the Excertus Imperialis and its reputation amongst the enemies of Mankind was dark indeed. The opening battles of the Horus Heresy had seen the vehicle deployed to stand against the god-engines of the Traitor Titan Legions and while there had been victories, they had only been won at considerable cost to Loyalist armoured regiments. The Solar Auxilia had only recently added the Shadowsword to its orders of battle, for in the past it had only rarely confronted an enemy it would be needed against. When it did, the High Commander would invariably call in a dedicated Imperial Army super-heavy tank regiment. With the eruption of the galactic civil war, all that had changed. Solar Auxilia forces were then regularly confronted by Traitor Titans, Knights, Siege-automata and other super-heavies. As a result, many Solar Auxilia Cohorts quickly integrated Shadowswords into their tactical reserves to confront these growing threats on the battlefield.

The Shadowsword is much rarer in the 41st Millennium than it was at the dawn of the Imperium due to the complexity of its main weapon, and the large capacitors and generator required to operate it. Nonetheless, the modern-era Imperial Guard and Departmento Munitorum have many ways to use the chassis of a Shadowsword that has been damaged, even if the Volcano Cannon is no longer functional.

On the battlefield, the Shadowsword's sole and unique role is that of Titan-killer. Its Volcano Cannon is able to bring down a Warlord Titan in one fell shot if the Titan's Void Shields fails at dissipating the blast. This capacity for sheer destruction makes the Shadowsword a welcome addition to the Imperial Guard's vehicle pool, for it allows the soldiers of the Imperium to engage enemy Titans without the support of the Adeptus Mechanicus' Titan Legions. If no enemy Titans are present, the Shadowsword is sometimes deployed as siege tank, obliterating enemy fortifications at long range, or as a super-heavy armour hunter. The sheer capacity for devastation of the Volcano Cannon is often enough to demoralise and put to rout those enemies of Mankind who care about their survival, but most Imperial Guard commanders are loathe to field their rare and precious Shadowswords in any other role than Titan-hunting.

This reluctance stems from the fact that for all the devastating might of the Volcano Cannon, the Shadowsword's drawbacks almost always overshadow the potential advantages of fielding it, except when hunting Titans. The Volcano Cannon was first designed as a Titan-grade weapon, and when fitted to a Battle Titan, the power required to fire comes directly from the God-Machine's Plasma Reactor. Installing a Plasma Reactor into a super-heavy tank's chassis has proven impossible for safety reasons, hence the Mechanicus devised a power converting system, which allows the weapon to draw the necessary power from the tank's engine by increments and build it up in a set of capacitors until the charge is high enough to fire the Volcano Cannon. The system has proven effective, but it imposes severe limitations on the Shadowsword. In a combat situation, the tank's engine must simultaneously propel the tank and charge the gargantuan Volcano Cannon capacitors. This results in the Shadowsword maintaining an extremely low maximum speed, forcing the tank to lumber forward slowly metre by metre. Even with the majority of the engine's energy output going towards charging the capacitors, the Volcano Cannon itself has a low rate of fire of less than one shot per minute, and has almost no traverse in its fixed setting, requiring the tank to be bodily aimed at the target. Worse, the engine of the Shadowsword must be stopped before firing the Volcano Cannon, to prevent any feedback from the capacitors with potentially catastrophic results. This makes any form of dynamic targeting impossible, and leaves the Shadowsword a sitting duck, highly vulnerable to air assault and counter-battery fire for long moments as it must restart its engine and start lumbering forward again. Additionally, the energy demands of the Volcano Cannon are so voracious that the Shadowsword's secondary armament is reduced to two twin-linked Heavy Bolter sponsons, inadequate to fend off any form of concerted assault. All these drawbacks mean that in the absence of sufficiently large and potent targets, the Shadowsword will remain in reserve and out of harm's way, carefully tended by the Tech-priests and Enginseers for those moments when its extraordinary firepower is truly required.

The Shadowsword is armed with a full-size Volcano Cannon, a targeter-guided Laser Weapon normally found on Adeptus Mechanicus Titans. The weapon is easily able to cut through the armour of any vehicle at long range, but due to its extremely slow firing speed, and the fact that the Shadowsword needs to disengage its engine in order to fire, makes it only suitable against large and slow targets, which is why it is almost always used against Titans. The Volcano Cannon works first by using the Shadowsword's engine to run a powerful generator that, in turn, charges the large capacitors that the weapon draws its energy from. The Shadowsword is also armed with two sets of sponson-mounted twin-linked Heavy Bolters for close-range defence, and two targeting sensors located above the Heavy Bolters, where the Lascannons are mounted on the Baneblade. The forward-firing Demolisher Cannon of the Baneblade is removed due to the large amount of space the Volcano Cannon capacitors take up, and this is replaced with space for the crew. The vehicle's sponson-mounted twin-linked Heavy Bolters can be replaced with twin-linked Heavy Flamers if needed, and the targeters located above the sponsons can be replaced with Lascannons. The Shadowsword can also have an additional pair of sponson mounts attached for enhanced firepower. The tank can be outfitted with a Pintle-mounted Heavy Stubber or Storm Bolter, a Hunter-Killer Missile Launcher, a spotlight, a mine sweeper, improved communication systems, and Smoke Launchers.

There are several officially recognised variants of the Shadowsword in use by the Imperial Guard. Like the Leman Russ and Chimera chassis, the Standard Template Construct chassis that serves as the base for the Baneblade and Shadowsword is highly adaptive. The Adeptus Mechanicus has capitalised on this over the millennia, installing various Titan-grade weaponry into the chassis, lending to the Imperial Guard much-needed super-heavy firepower without having to field their own Titan Legions. These vehicles are mostly the result of an Imperial commander's need to get something done tactically that only a Titan or super-heavy tank like the Shadowsword can accomplish. On these variants the gargantuan Volcano Cannon has been replaced with one of the weapons usually found on a Titan weapon hardpoint, or a super-heavy howitzer that can obliterate enemy fortifications and troops alike. When the tank's Volcano Cannon is replaced the room left over from removing the capacitors and generators for that weapon creates a moderate amount of space for infantry transportation. Many variants of the Shadowsword are able to carry around 25 infantrymen into combat. Known variants of the Shadowsword include the following:

Every Shadowsword made in the Imperium of Man is transcribed with its own unique serial number and name. In real life every Shadowsword resin kit includes a unique Forge World Certification Number. 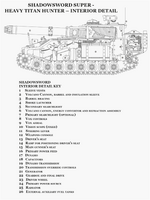 A detailed schematic of a Shadowsword interior

A Shadowsword on the battlefield

A Shadowsword advancing with its support units

Two Shadowswords near the edge of an Imperial city

A Shadowsword of the 6th Cadian Armoured Regiment

A Shadowsword of the 12th Cadian Armoured Regiment

A Shadowsword of the Valhallan 1st Armoured Regiment
Español
Community content is available under CC-BY-SA unless otherwise noted.
Advertisement