A Servitor is a mindless cybernetic drone created from a fusion of human flesh and robotic technology used to carry out simple, manual tasks across the Imperium of Man. While many Servitors are genetically-engineered, vat-grown sub-human clones or replicae created by the Adeptus Mechanicus from human genomes who have their bionic implants installed after "birth," others were once truly human. These Servitors were usually criminals who fell afoul of Imperial Law, particularly a person who has offended or damaged the Adeptus Mechanicus in some fashion. These unfortunate criminals will be sentenced to Servitude Imperpituis by the Arbitrators or Judges of the Adeptus Arbites and will be handed over to the Mechanicus' Tech-priests to be mind-wiped, reprogrammed, and cybernetically-enhanced to serve some specific, rudimentary function. Servitors are generally mindless, semi-organic robots, possessing only the most basic of instincts, though some are fully capable of speech if such functions and knowledge are programmed into them. Their brains are programmed to perform only the task they were designed for, whether that be maintenance, construction, or even warfare. The altered and fragmented brain of a Servitor functions poorly unless constantly supervised. Most will eventually go into a state of mindlock, babbling incoherent nonsense as the Servitor tries to assert some form of control over its functions.

Servitors are created by the Adeptus Mechanicus, and supplied to departments of the Adeptus Terra such as the Administratum and to the Inquisition, as well as to military organisations like the Imperial Guard and various Space Marines Chapters. Servitors make up the vast bulk of the population of Mars and other Forge Worlds of the Mechanicus, where they fulfill the role of tireless workers, soldiers and labourers.

There are many types of Servitor, each designed for a certain task. Typical Servitor types include "Technomats" which operate and service various machines, "Holomats" which act as holographic recording devices, "Lexomats" which serve as semi-organic computers with tremendous calculating powers for record-keeping and data storage, and "Drones" which are cybernetic robots -- stupid and essentially mindless slaves ideal for menial work and little else.

Servitors are often used to carry out the more dangerous or laborious duties in the Imperium, such as heavy mining in hostile planetary or asteroid conditions. They also accompany Tech-priest Enginseers on the battlefield with the Imperial Guard, as well as the Space Marines' Techmarines. These types aid in the repair of vehicles or sometimes carry large and dangerous weapons such as Plasma Cannons. For both forces, the Servitors are practically identical cybernetically, although the Servitors of some Space Marine Chapters are created from failed Astartes Initiates who were made largely brain-dead as a result of their body's rejection of their implanted Space Marine gene-seed organs before their transformation into cyborgs. However, becoming a Servitor allows them another opportunity to serve their Chapter and the Emperor. Perhaps the most feared of all the Servitors are the Praetorian Servitors, a class of heavily-armed and armoured Gun Servitors deployed by the Adeptus Mechanicus to guard the Tech-priests and temples dedicated to the Machine God.

Attempting to count all the types of Servitors within the realm of the Imperium would be impossible. The following are the most well-known variants commonly seen throughout the galaxy:

Servo-skulls are drone-like robotic devices that appear to be human skulls outfitted with electronic and cybernetic components that utilise embedded anti-gravity field generators to allow them to hover and drift bodiless through the air. They are fashioned using robotic components from the skulls of loyal Adepts of the Adeptus Terra and other pious Imperial servants so that they may continue their work for the Emperor of Mankind even after death. Presumably, to have one's skull chosen to serve as a Servo-skull is a great honour in the Imperium. Servo-skulls form an important niche in Imperial work, serving as everything from auto-scribes that copy down important conversations and confessions of prisoners, to simple moving torches, hovering about their charge with candles and electric lanterns to illuminate the area. Certain Magi of the Adeptus Mechanicus and high-ranking Imperial officials have special logic engines or Cogitators (computers) that slave Servo-skulls to a particular owner. Servo-skulls are used throughout all the different governmental organisations of the Imperium of Man, and each is built to perform a certain task. Some are designed for military roles, and among these some are built with enhanced optical sensors to allow them to fulfill a role as a reconnaissance scout. Servo-skulls are often used by Inquisitors and Inquisitor Lords as non-human assistants referred to as Familiars. In this case they are mentally linked to the Inquisitor through psychic or cybernetic means, allowing him to control them and see and hear through their senses. 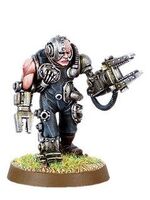 A Cenobyte Servitor of the Black Templars Chapter 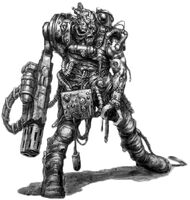 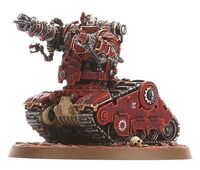 A Kataphron Breacher Battle Servitor armed with a Torsion Cannon 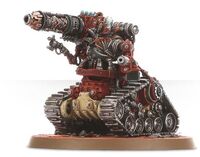 A Kataphron Destroyer Battle Servitor armed with a Heavy Graviton Cannon
Add a photo to this gallery
Retrieved from "https://warhammer40k.fandom.com/wiki/Servitor?oldid=293221"
Community content is available under CC-BY-SA unless otherwise noted.