The Secutarii, also known as the Corpus Secutarii, are Tech-Guards: cybernetically augmented warriors that serve in the armies of the Adeptus Mechanicus. Although they share many common roots with the Skitarii that form the bulk of the Adeptus Mechanicus' cybernetic armies, the Secutarii play a very different role on the battlefield, for they serve as support infantry for the Titan Legions of the Collegia Titanica.

As much warriors as guards, the Secutarii are entirely devoted to the protection of the Titans under their care, which is why they are also known as the "Titan-Guard."

The Secutarii share a common ancestry with the Skitarii Legions as they were both founded on sacred Mars in a time that largely predates the foundation of the Imperium of Mankind. But where the Skitarii are directly bound in service to their home Forge World or the heavily augmented Thallaxii serve only the Ordo Reductor, the Secutarii were created specifically to serve as honour guards and protectors of the ancient Mechanicum's most powerful weapons: the God-engines of the Collegia Titanica. While on the battlefield the power of the Titans is absolute, their sheer scale and prominence leads to certain vulnerabilities, vulnerabilities the Secutarii are designed to counter. The foremost of their roles are to provide close protection and defence of the Titans from covert assaults, infiltration attempts and ambushes, especially when the Titans are not in the field, but resupplying behind the frontline. Yet, it is also the Secutarii's sacred duty to accompany the Titans on the battlefield and keep them from being overrun by ground troops, for despite their unsurpassed power of destruction, even a Titan can fall if it is beset at close range by a well-armed and determined infantry force, much like a mighty beast ultimately brought low by the stings of venomous insects.

The Secutarii's second battlefield role is to sweep in behind the God-engines of the Collegia Titanica and destroy whatever has weathered their fearful firepower, for while a Titan might shatter a mighty fortress or blast a tank company to ashes in mere solar minutes, its might cannot be squandered on the eradication of those few survivors left in its wake. While the Titan will press on to more important targets, the Secutarii will mercilessly hunt down and slay those that would seek to escape the wrath of the Machine God.

Alongside the Scutarii machine-labour corps who attend to the sustenance, repair, re-arming and refuelling of the Legion's Titans in the field, the Secutarii Titan-Guard are part of the auxiliary force directly under control of the Magi of the Titan Autokratis. Here, it is the Secutarii's sworn duty to defend the Titan's landing fields and supply lines from assault as well as to reach those hulks of disabled, damaged or destroyed Titans and defend them from plunder or sabotage by the enemy. Another of their sacred charges is the assistance or rescue of those Titan crew forced to abandon their God-engine and the retrieval of their mortal remains if they have been left in the wreckage. In this sacred task, the Secutarii consider their own lives utterly expandable if it serves to save the life of one of the Legion's Princeps'.

Although since the Age of Strife the long history of the Secutarii has filled many glorious chapters, the finest of these chapters were written during the Great Crusade. At the height of the Imperium's power, each fully-operating Titan Legion possessed its own attendant regiments of Secutarii. When the apocalyptic wars of the Horus Heresy split the Imperium asunder, Titan Legions could be found on both sides of the conflict and so the Secutarii would fight and die both in the names of the Emperor of Mankind and that of the Traitor Warmaster Horus Lupercal, faultlessly loyal to the God-machines they had sworn to protect.

Similar to the Skitarri, Secutarii undergo a high level of cybernetic augmentation, with the majority of their organs either replaced by bionics or enhanced through other implants of circuitry, bio-plastic and metal. This augmentation is not only designed to improve their capacities in combat, but is also perceived as a manifestation of their faith in the Omnissiah, each augmentation bringing them closer to the perfection of the living avatars of the Machine God: the Titan-engines in whose shadow they serve.

The Titans they protect are also the focus of many rites of veneration and submission which the Secutarii hold daily. Whilst the modifications of their form, the configuration of their armament and the variety of their cybernetic implants vary greatly, the Secutarii all share one common augmentation which the Skitarii are bereft of: the Kyropatris Field Generator. This obscure protective device visually resembles a backpack, but the Kyropatris Field Generator is actually fully incorporated into a Secutarii's ribcage and chest cavity.

The weapons of the Adeptus Mechanicus' infantry legions are some of the most dangerous in the galaxy. As efficient as they often are unsafe, they are powerful beyond mortal understanding, and have brought death to the galaxy for millennia. The weapons of the Skitarii and Secutarii are a strange amalgamation of ancient science, modern technology and baroque craftsmanship. Some may feature carved wooden gun stocks, bolt action breaches, whirring dynamos and elegant brass triggers which meld faultlessly with heat sinks, radioactive ammunition, lightning projectors and glowing fuel cells. They are the past and the present combined, terrifying in the devastation they cause and beautiful in their antiquated designs. This anachronistic combination is not due to the available materials or a desire for aesthetically pleasing weapons. Nor is it born of practicality; far from it. Trees do not grow on Mars (or any other Forge World, for that matter) and have not for thousands of standard years. Technological advances have made bolt action rifles obsolete and the dynamos that power many Skitarii weapons have been superseded by more conventional power sources.

Yet the Tech-priests of the Adeptus Mechanicus revere ancient technology. To them, the wargear and weapons designed during the Dark Age of Technology were the pinnacle of design and everything since is but a poor substitute. But these ancient weapons are not just superior: they are considered vastly superior, inspired by the Machine God Himself and, as such, regarded as sacred instruments of destruction. Hyet, in comparison to the average Skitarii, the Secutarii focus more on durability and defensive potency in their weapon load-outs to better endure the tempestuous and savage battlefield conditions where Titan-grade weaponry is unleashed.

Arc Weapons are powered by bulky permacapacitors shipped from Mars' Great Repositorium. Some of these zinc-plated blocks store energy from the days when the Imperium was young. They discharge with a loud crack, firing bolts of blue-white electricity that can fry a man's brain or overload a war machine's datacortex in a solar second.

Many weapons wielded by the Skitarii are so deadly to the wielder they're widely condemned by the rest of the Imperium. Their baroque beauty belies a singularly vile function -- not only to strike, but to render the battlefield as deadly as the rad-wastes of Mars. As dangerous as they are to their wielders, Radium Weapons are far more deadly to the enemy. Armour may repel the solid rounds, but only the most heavily-reinforced battle-plate can protect the target from the baleful energy given off by the hyper-irradiated bullets. As more and more shots are fired, the area becomes increasingly saturated with radiation until a localised rad-storm occurs, striking down the enemy with radiation sickness and leaving the ground beneath their feet saturated and lifeless.

Radium Weapons are so volatile that they eventually kill their wielders. The war plate worn by the Skitarii Vanguard, combined with their rad-leeching robes and augmetic limbs, goes some way to protecting them from the harmful feedback generated by these weapons, though inevitably some still seeps through. The Vanguard welcome this, for they are the Omnissiah's holy warriors and even the lethal touch of radiation is a sign of His blessing. Over time their bodies become so saturated with radiation they become weapons themselves, their mere presence enough to leave an enemy soldier reeling with nausea and a hacking cough laced with bloody phlegm. Death follows soon after.

Galvanic Weapons are electro-galvanically-driven projectile launchers that fire solid-slug, laser-guided, multi-function projectiles such as flachettes or hammershots. The base model of these weapons is the Galvanic-Caster which fires rapid bursts of low-velocity but razor-edged metallic flachettes, not so different from the Shuriken Weapons carried by the Eldar.

Galvanic Casters also field a secondary concealed discharger capable of blinding enemy targets by burning their retinas through the use of Ignis-charges. The weapon may be augmented with a high-intensity capacitor which further compresses the galvanic charge to propel its slugs at supersonic speed with respectable armour-piercing capabilities. Galvanic Casters are primarily used by Secutarii Peltasts. 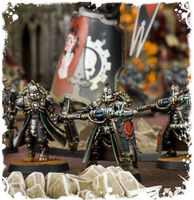 A group of Secutarii Hoplites defending a Battle Titan 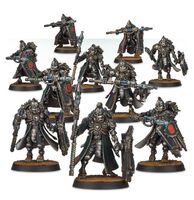 A large formation of Secutarii Hoplites 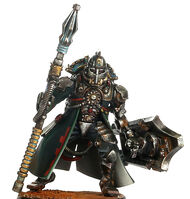 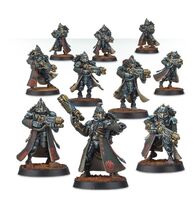 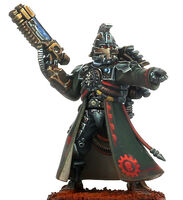 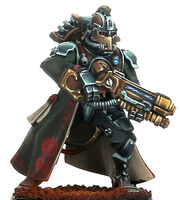 A Secutarii Peltast Titan-Guard
Add a photo to this gallery
Retrieved from "https://warhammer40k.fandom.com/wiki/Secutarii?oldid=337729"
Community content is available under CC-BY-SA unless otherwise noted.