The Sectai Prosperine are a thrallband of the Thousand Sons Traitor Legion. They were born of individual Thousand Sons sects that banded together in order to reap the benefits of their combined knowledge and power.

The Sectai Prosperine was originally a gathering of minor sects hailing from the fringes of the Thousand Sons hierarchy. In an effort to increase their knowledge and influence alike, the Sorcerers leading these sects banded together as a single organisation, relegating their personal heraldry to symbolic runes and donning the azure, gold and purple of lost Prospero's ruling caste. In combining their efforts, they surpassed all but the greatest of their rivals in terms of power. They now consider themselves the inheritors of Prospero's true legacy, embracing that planet's dark fate instead of running from it as have many of their kin, and believing the destruction of their former homeworld imparted to them knowledge that would otherwise have remained hidden.

The Sectai Prosperine thrallband colours are azure trimmed in gold. The runes upon the tabards of the Sectai Prosperine are laden with meaning, but the colours beneath are often of simpler significance. They hark back to the time when the Sectai was comprised of three autonomous factions -- white for the Learned Mysticae, purple for the Brethren of the Amethyst Sun, and pale green for the Bringers of Spiritual Dawn. The purple colouration common to the Sectai is so widespread it has become part of the macro-cult's identity. Those Chaos Cultists and mutants that serve its Sorcerers will often dye their robes or paint their flesh purple. It has been known for entire thrallbands to change colour at the whim of their Tzeentchian masters.

The Sectai Prosperine thrallband's symbol is a yellow-coloured sigil of the Cult of Knowledge centred upon a field of azure and trimmed in gold.

A Sectai Prosperine Exalted Sorcerer, note that deep purple has long been synonymous with great wealth of knowledge among the Thousand Sons.

Another Sectai Prosperine Exalted Sorcerer; note that the tabards and script-bands of each Sorcerer often bear runes of protection and control.

A Sectai Prosperine Sorcerer; though all members of this thrallband wear blue and gold, the colours of its individual cults have been preserved across the years.

A Sectai Prosperine Sekhmet Scarab Occult Terminator; note the avian skulls that adorn the weapons and armour of the Sectai's most favoured, an echo of an ancient Tizcan practice from lost Prospero.

A Sectai Prosperine Sekhmet Scarab Occult Terminator; the Scarab Occult often bear the icon of the staring eye -- once purely symbolic, but now given strange life.

A Sectai Prosperine Rubricae; each Sectai thrallband is united by the gems and filigree upon their armour -- to a brotherhood once seen as poor in comparison to the Prosperine elite, such displays of material wealth have a worldly appeal.

A Sectai Prosperine Rubricae; note the Dark Tongue script on the tabard, which includes the all-seeing eye of Magnus. 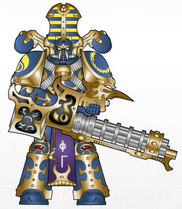 A Tzaangor of the Sectai Prosperine thrallband; the skin of this Tzaangor has been painted purple, a common colouration utilised by the Sectai'
Add a photo to this gallery
Retrieved from "https://warhammer40k.fandom.com/wiki/Sectai_Prosperine,_The?oldid=321256"
Community content is available under CC-BY-SA unless otherwise noted.