The Sect of the Red Echo, or simply the Red Echo, is a thrallband of the Thousand Sons Traitor Legion led by the Sorcerer Daedophet the Red Echo. Down the millennia, Daedophet has drawn other Thousand Sons Legionaries to his banner, eventually forming his own thrallband. It is said that the Red Echo are constantly haunted by eerie harmonies -- whether this is the music of the spheres, the plainsong of old Prospero or the lingering screams of their victims, is unknown.

Though their leaders were once known for their forbearance, the Sect of the Red Echo has carved a gruesome warpath since falling to Tzeentch, with haunting screams following wherever they go. Some amongst the Thousand Sons' Cult of Time interpret these screams as the dying, echoing cries of their victims, others as the mad harmonies of the Warp itself.

The Red Echo thrallband's colours are azure trimmed in gold. Crimson and cream robes, along with golden tabards, are often worn by members of this thrallband.

The Red Echo thrallband's sigil is a golden Cult of Knowledge symbol centred upon a field of azure and trimmed in gold. 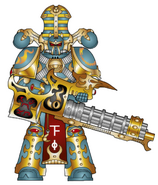 A Red Echo thrallband Sekhmet Scarab Occult Terminator
Add a photo to this gallery
Retrieved from "https://warhammer40k.fandom.com/wiki/Sect_of_the_Red_Echo?oldid=336801"
Community content is available under CC-BY-SA unless otherwise noted.