Scout Armour, also sometimes referred to as Infiltrator Armour, is the standard type of combat armour worn by Space Marine Scouts before they become full Initiates of their Chapter and have earned the right to wear a suit of true Power Armour. Scout Armour is actually a modified suit of Imperial Carapace Armour similar to that worn by elite members of the Astra Militarum that has been enlarged to fit the anatomy of a member of the Adeptus Astartes.

Scout Armour is comprised of overlapping plates of ceramite which can easily stop a kinetic round or a low-power directed energy bolt, while the fabric fatigues which cover the non-vital regions of the Scout Marine's body are composed of a type of ballistic nylon thread which provides a lesser level of protection without reducing the Scout Marine's manoeuvrability.

Scout Armour is much quieter and less cumbersome than Astartes Power Armour with all of its mechanised and Cogitator-aided systems. Scout Armour is thus an ideal form of protection for Scout Marines, who are responsible for undertaking their Chapter's infiltration and sniper duties where silence is paramount.

Similar to the armour worn by sniper Scouts of Chapters like the Raven Guard, Deathwatch Scout Armour is composed of a hardened ceramite chestplate that covers the Space Marine’s torso, shoulders and groin area worn over a reinforced body glove. Armoured, elbow-length gauntlets protect the wearer’s hands, while heavily reinforced, ceramite-toed Grox-hide boots keep his feet safe and dry. Since Deathwatch Scout Armour is essentially a half-suit over a form-fitted body glove, and is made of light materials, it does not hinder the wearer’s movement and allows him to retain his natural agility and stealthiness while still providing excellent protection. This armour is often worn in conjunction with Cameleoline Cloaks.

Although it is not environmentally sealed like Astartes Power Armour, the composition of the body glove and numerous built-in systems keep the wearer relatively safe from hazardous conditions. The body glove is impregnated with special fibres coated with powerful unguents that provide limited protection from atomic, chemical, and biological threats. It is also woven with small, gel-filled passages that allow the Space Marine wearing it to better withstand heat and cold as it regulates his temperature.

Mounted on the armour's back is a heavy, hardened unit that contains, among other things, both drinking water and an oxygen supply. Water and air are delivered to the wearer through a dual-purpose rebreather/hydrator that acts as a gas mask and filters air from the surrounding atmosphere. He also wears an auto-injector glove beneath one of his gauntlets that functions much like the auto-injector system found in Astartes Power Armour.

Along with the protective elements, there are a number of built-in systems designed to assist the Space Marine in his mission as the eyes and ears of his Deathwatch Battle-Brothers. In his back unit, the wearer carries an encrypted, long-range Vox system that allows him to maintain contact with command, as well as communicate with airborne, armoured, and artillery units to act as a forward observer or fire-controller.

The hard plates of the armour are painted with a special coating that makes it difficult to detect with Autosense, Auspex, and Augur arrays. The combination of built-in systems and the inherent qualities of the armoured body glove and carapace make a Space Marine wearing this armour, while not as deadly as his Power Armoured Battle-Brothers, still an extremely formidable combatant.

The different built-in systems and abilities of Infiltrator Armour are as follows: 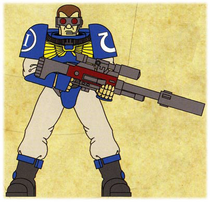 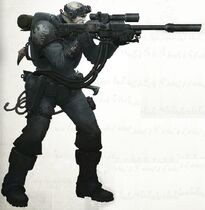 A Wolf Scout of the Space Wolves Chapter
Español
Community content is available under CC-BY-SA unless otherwise noted.
Advertisement