"You think that's summer rain falling? Ha! It is the blood of those who crossed the Scourges, boy. You cannot see them, but your foolish kin adorn the spires and crenellations of High Commorragh like grisly fruit upon the bough. Up there they bleed out their last, moaning and helpless, impaled through and through. No! Do not look upward! Catch a Watcher's eye, and it will be your blood that rains down next..."

A Scourge is a genetically altered Drukhari mercenary who has had wings grafted onto his body and who now serves essentially as jump infantry in Drukhari raid forces. If one were to trespass amongst the jutting spires of Upper Commorragh, one might just make out the winged figures soaring upon the hot thermals of the Dark City.

If one looked carefully, these figures would be recognised as the Scourges, genetically and surgically altered avian Drukhari who have been refashioned into something far more deadly. If a gaze lingers too long, those same figures will swoop towards the watcher, seizing him and impaling him upon the sleek spires of their aeries.

Scourges are an intrinsic part of the society of Commorragh. The omnipresent intrigues of the Dark City thrive on information, without which even the greatest of the Kabals is soon rendered impotent. The most secure forms of Vox transmission can always be intercepted and psychic communication is strictly forbidden to the Drukhari.

Instead, the Drukhari aristocracy pays handsomely for the Scourges to take their missives to their destination by hand. Each communique is sealed with tailor-made toxins, the antidotes to which -- usually -- are only held by the recipient. The Scourges are so vital to the intrigues of the Dark City that to kill one is to invite a very painful death by his or her fellows.

Considered the pinnacle of Drukhari body modification, the metamorphosis from warrior to Scourge is a lengthy and painful process, as one might expect of the Drukhari. A rich and daring Drukhari may surrender himself to the mercies of the Haemonculi and request that his bones be hollowed out by the drills of a Talos, that bands of new, vat-grown muscle be grafted onto his torso, and powerful avian wings and adrenaline dispensers be attached to his shoulders so that he is capable of undertaking true flight.

Even if the warrior survives this grueling procedure, he is still not yet a true Scourge, for he must then fly all the way to the corpse-strewn aeries of his new brethren. His still raw and bleeding wings carry him from the oubliettes of the Haemonculi to the topmost spires of the Dark City where the Scourges make their home and he must fight through the deadly fatigue, warring gangs of Hellions, vicious Reavers and all the other types of airborne terrors to be found in Upper Commorragh to get there. If he makes this vertical pilgrimage and manages to survive its dangers, he earns the right to call himself a Scourge, a member of a highly exclusive mercenary clique of skyborne warriors that looks with disdain upon those of their kin who remain tied to the ground.

"Arrogant creature, you will pay for the insult of trying to force me to the ground. The mere thought of brushing my feet against the same dirt you tread sickens me. I will take your imminent screams of dying anguish as your crude attempt at an apology."

Solarites are veteran Scourges who are now considered leaders amongst those winged mercenaries. They generally are more skillful in battle and carry more advanced wargear.

They may also have pursued further body modifications from the Haemonculi, including having their skin replaced by feathers and their skulls elongated to give them the aspect of a great xenos raptor.

Many Scourges, especially the veterans known as Solarites, are so removed from their former lives that they now sport feathers in place of hair and elongated skulls. No matter what their chosen appearance, all Scourges relish the arts of war. Because of this, and the immense wealth they earn from the Kabals, all Scourges possess highly advanced Dark Eldar wargear.

Clad in a form of porous body armour called Ghostplate, they descend from above, shrieking with the sheer exhilaration as they ruthlessly scythe down those who seek to escape. Scourges prefer to engage the enemy at range, for they are highly protective of their altered and now fragile physiques. They lay down punishing salvos of firepower, glorying in the screams of their dying foes while using their enhanced senses before wheeling about for another pass.

As a result all Scourge weapons are designed to be fired while in flight. The most popular is the Shardcarbine, an advanced variant of the Splinter Rifle with a much higher rate of fire, though Scourges also favour the Haywire Blaster, which releases the electromagnetic energy of Commorragh's captive suns in a powerful burst that fry electronics and the Heat Lance, which can disintegrate a foe in a blast of atomic fire. Scourges also usually carry a number of Plasma Grenades for hardened or heavily armoured targets.

A Drukhari Scourge standing in the shadows 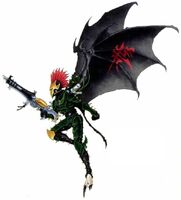 A Drukhari Scourge, Aerie of the Black Pinion

A Solarite Scourge, searching for its next prey
Add a photo to this gallery
Retrieved from "https://warhammer40k.fandom.com/wiki/Scourge?oldid=345839"
Community content is available under CC-BY-SA unless otherwise noted.