The Scarab Occult Terminators, originally known as the Sekhmet and Magnus' Veterans, were the Veteran Space Marine Battle-Brothers of the Thousand Sons Legion who served as the Primarch Magnus the Red's elite Honour Guard.

They were made up of the best and brightest of the Thousand Sons Legion's Astartes and were equipped with resplendent crimson and ivory Tactical Dreadnought Armour, with jade scarabs gleaming on their breastplates and golden crests rearing from their Atef helmets.

Their visors were marred by a single vertical slash that obscured the right eye lenses of their helmets. This was in honour of their Primarch, nicknamed the Cyclops, due to the loss of his right eye from peering too deeply into the mysterious realms of the Immaterium.

These fell warriors, whose reputation was well-known throughout the Great Crusade in the late 30th and early 31st Millennia, were the dour Terminator elite of the Thousand Sons Legion, trained all their lives to fight as a single unit and tempered by the long wars of conquest and Imperial Compliance.

The Scarab Occult did not fight as individuals, but almost as a single body of one mind. They formed a wall of hulking, armoured bodies and flashing long-hafted Force Axes.

In battle, they often changed position to counter their foes, and where one of their enemies moved to strike a blow against one of the Sekhmet, his brothers to either side moved to defend him. The Scarab Occult were trained in more than simple bladework and marksmanship.

The psychic sorcery that would eventually condemn their Legion was the decisive advantage held by the Thousand Sons elite in battle. They could ignite the very air and turn it against their enemies like a living tide, twisting their minds so that they struck at their own allies or conjured shields and blades of kinetic force.

The few Sekhmet that remained fled alongside the rest of the surviving Thousand Sons to the Planet of the Sorcerers at the conclusion of the Burning of Prospero during the opening years of the Horus Heresy.

Years later, during their long exile, following the casting of the disastrous sorcerous ritual known as the Rubric of Ahriman, these fine examples of both warriors and psykers also had their physical bodies reduced to dust along with their non-psychic brethren.

Controlled by their Sorcerer masters, the undead Scarab Occult Terminators now advance upon their foes implacably and as silent as the grave.

The Sekhmet were active throughout the era of the Great Crusade and the Horus Heresy. The Sekhmet were all Veteran members of the Scarab Occult of the XV Legion's elite 1st Fellowship, under the command of Captain Ahzek Ahriman, who was also the Magister Templi of the Legion's Corvidae Cult.

These proud and extremely devoted warriors were both combat Veterans and highly-ranked members of the psychic Cult system of the Thousand Sons. The Sekhmet were powerful warrior-mages, and could call forth powers mortal men could never dream of wielding. On his own, each warrior of the Sekhmet was capable of subduing worlds. In battle, the Scarab Occult could simply will their Tutelaries into their enemies' hiding places, and burn them out with invisible fires or crush them with psychic hammer blows. Methodical and swift, Ahriman's 1st Fellowship would then push onwards like autonomous engines of destruction.

In the days before Council of Nikaea, when the Thousand Sons took to the field and encountered a foe so mighty that their own master, the terrifyingly powerful Magnus the Red, deemed it necessary that he take to the battlefield to best it, he often did so at the head of a configuration of his Sekhmet, supported by the most deadly elements of his arcane Legion and an unimaginable concentration of psychic force.

Before the Guard of the Crimson King, foul xenos warlords who had slain whole worlds and mysterious entities hellish beyond description fell broken and shattered, and even the might of ancient terrors such as the Eldar and the M'Varta could not stand.

None of the Sekhmet were ranked below the Thousand Sons Cult grade of Philosophus, the final Cult rank a warrior could hold before facing the Dominus Liminus. Each Astartes was able to mentally transcend his physical and emotional weaknesses; achieving a form of emotional purity that resulted in warriors who were both fearless and willing to follow orders immediately and unquestioningly.

This extraordinary level of discipline was commented on by some of the other Primarchs who witnessed the Sekhmet in action during the Great Crusade. Jaghatai Khan of the White Scars Legion commented that the Sekhmet were no better than automata, whilst, in a similar vein, Ferrus Manus of the Iron Hands Legion likened them to robots, though some within the Thousand Sons suspected that knowing the Iron Hands' affinity for technology and cybernetic augmentation, this comment may have been meant as a compliment. Leman Russ, the Great Wolf of the Space Wolves Legion, showed disdain for what he perceived as the Sekhmet's perceived "lack" of fighting spirit and esprit de corps due to their taciturn natures.

Following the Thousand Sons Legion's transformation into a Chaos Traitor Legion devoted to Tzeentch and the enactment of the Rubric of Ahriman, the physical bodies of the Sekhmet, like many of their non-psychic Battle-Brothers, were reduced to mere dust -- the animating spirit that remained possessing only an echo of their once-vaunted intellect. They go into battle at the behest of their Sorcerer Lords, advancing with eerie and unhurried calm.

Some of these masters were part of the Scarab Occult at the time of Ahriman's mighty spell, and were robust enough of spirit and mind to resist its obliterative effects. Others are powerful mystics who have ascended the ranks of the Thousand Sons over many centuries and through twisted ingenuity earned a place amongst the vaunted Sekhmet. In either case, a Scarab Occult Sorcerer controls a nigh-unstoppable force of warrior-automata, capable of wading unharmed through masses of lesser enemy infantry.

The Scarab Occult's ornate armour -- derived from a variant of ancient Tartaros Pattern war-plate -- ripples with arcane force, sending solid shot ricocheting away and even turning aside the beams of high-technology weaponry. Each suit was a relic of the Legion, but even before their fall to Tzeentch was complete the Thousand Sons had begun engraving their Terminator Armour with profane inscriptions.

This desecration continued after the proscriptions against sorcery laid down by the Council of Nikaea, for the Scarab Occult saw it as their duty to guard the forbidden knowledge their Primarch had collected. The Rubric of Ahriman sealed each warrior inside his defiled armour permanently, locking the remnants of their souls for eternity with the idolatrous spell-words they had etched. Over millennia of exposure to the Warp, the true power of these etchings has blended with the essence of each warrior, creating in the Scarab Occult a hellishly twisted warrior cabal.

The ubiquitous weapon of the Scarab Occult Terminators is a cruelly curved blade based on the khopesh of ancient Prospero. The earliest khopeshes were forged from what scant pieces of precious metals could be found on the barren world, and were symbols of authority used to mete out punishment to those who disobeyed Prosperine laws.

When the Thousand Sons Legion came to Prospero, the khopesh was adopted by the Scarab Occult as the mark of their rank, and they were fitted with power-field generators to allow them to cleave matter at a molecular level. Though the warriors of the Scarab Occult are but ghosts of their former glory, the deadly speed and skill with which they wield their blades in close quarters has remained ever potent.

The Scarab Occult Terminators bat away their assailants' blows with contemptuous sweeps of their Power Khopesh blades, before delivering devastating ripostes against those who insult the warriors of Prospero with their resistance.

In battle, these elite warriors are often gathered into a battle formation known as a Sekhmet Conclave, a concentration of magical force like no other. The air around these timeless warriors shimmers with energy as the sigil-wards of the Scarab Occult magnify their protective powers to new heights. Gathered around their psyker masters, these massively armoured warriors walk in thudding lockstep, the beat of their heavy tread a deathly drum that speaks of impending doom.

Inferno Combi-bolters are raised at a silent command, a blistering salvo of bolts hammering out to send transmorphic flame billowing in all directions.

The arcane syllables uttered by their lords echo across the battlefield -- though the Scarab Occult were once counted amongst the most powerful mortals in existence, their independence is long gone, and now they serve only the sorcerous fiends in their midst.

Like almost all Sorcerers of the Thousand Sons, Scarab Occult Sorcerers kept their independent existence and intact personalities after the disastrous Rubric of Ahriman. 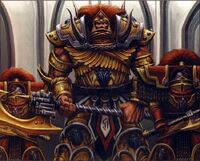 A Sekhmet of the Warp Gheists thrallband
Español
Community content is available under CC-BY-SA unless otherwise noted.
Advertisement