The Salamander, also known as a Salamander Scout, is a small, armoured reconnaissance vehicle used by the Astra Militarum and based on the Chimera chassis. It is designed primarily for reconnaissance duties and is lightly armed and armoured but moves very rapidly.

The Salamander is also used as a lightweight and fast moving command vehicle, as its open-topped design allows an Imperial commander to better coordinate his units.

The Salamander is used in many roles, including as a scouting vehicle, towing vehicle, and even as a command unit. Equipped with Salamanders and Sentinels (though motorcycles or even riding beasts like the horse are not unknown), a reconnaissance squadron is often at the forefront of an offensive, fulfilling the vital role of scouting the enemy's routes of advance and locating their positions for an attack.

Operating in front of the main Imperial Guard force, these scout units need to be able to provide their own fire support. The Salamander Scout, equipped with an Autocannon and Heavy Bolter, provide this heavy weapon support. Sentinels are extremely mobile and able to operate in nearly any type of terrain, but they are lightweight and unlikely to survive a protracted engagement with the enemy. This is where the more heavily armed Salamander shines. While it is certainly no match for a true main battle tank, it is extremely fast and therefore capable of getting out of harm's way quickly. An armoured vehicle capable of taking on other light vehicles is a highly useful asset, since first contact between enemy forces is often a clash between their light scout units.

For mutual protection, Salamander Scouts often operate in tandem, teaming up to provide extra support. One vehicle will provide cover for the other as it moves forward, with each taking turns leading the way. Salamanders are often the vehicles at the very front of an Imperial Guard advance and so are often ambushed or encounter an unexpectedly strong enemy position or unit. When an Imperial Guard regiment is on the defensive the Salamanders are often relegated to a rear area for security duties. Like Sentinels, it is not unusual to find Salamanders guarding supply dumps, headquarters units or patrolling supply routes.

During a major offensive, Imperial Guard reconnaissance units often do not have enough vehicles to fulfill all of the necessary missions. In this case, the shortfall is made up by Armour Fist squads operating in Chimeras. A squad will be detached from its parent platoon and company and temporarily attached to the reconnaissance company. Because of this, Armoured Fist patrols and Salamander Scouts often operate together.

The Salamander Scout is operated by a 4-man crew that is comprised of a gunner and driver inside the vehicle and a commander and Vox-operator on the rear fighting platform. Due to its reconnaissance role, each Salamander is fitted with unusually potent communications equipment to allow it to report back to the command units in its rear. Direct links to regimental command units, such as Leviathans and armoured company command tanks, are not unusual.

When used as a command vehicle the Salamander acts as the personal transport of the Imperial commander during the battle, and is usually outfitted with enhanced communications equipment. The Salamander Command is not meant for front-line combat, and is usually used as just an officer transport vehicle that allows the company or regimental commander to keep in touch with his units.

The Vanaheim Pattern of the Command Salamander is fitted with a multi-spectral surveyor as part of its overhead hatch. This advanced piece of equipment provides the vehicle with magnification, night vision, and tracking capabilities. The Salamander Command is armed with a Heavy Flamer in place of the Autocannon usually mounted on a Salamander.

The Heavy Flamer can be replaced with another Heavy Bolter, giving the vehicle better medium-ranged firepower. Both variants can be outfitted with the following enhancements; Camouflage Netting, Extra Armour Plating, a Hunter-Killer Missile Launcher, improved communications equipment, a mine sweeper, a Dozer Blade, rough terrain modifications, a Pintle-mounted Heavy Stubber or Storm Bolter, track guards, a Searchlight, and Smoke Launchers.

Notable Users of the Salamander

A Scout Salamander of the 2nd Death Korps of Krieg Armoured Regiment, this particular vehicle fought in the defense of Tartarus Hive during the Third War for Armageddon

A Scout Salamander of the 114th Cadian Armoured Regiment, this particular vehicle fought during the Taros Campaign against the Tau 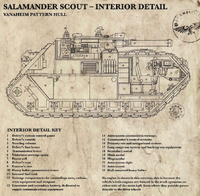 The Interior Detail of a Vanaheim Pattern Salamander Scout
Español
Community content is available under CC-BY-SA unless otherwise noted.
Advertisement