The Sabre Tank Hunter was an anti-armour variant of the Rhino that was developed and used sometime shortly before or during the Horus Heresy in the late 30th and early 31st Millennia. During this time, large tank formations were very common amongst the Space Marine Legions that fought on both sides of that interstellar civil war and so too was the need to combat them.

The Sabre Tank Hunter was designed for just such a purpose. The Sabre was armed with a powerful anti-armour weapon known as the Laser Destroyer. This powerful laser weapon gave the Sabre the ability to engage and destroy enemy armoured vehicles at range.

The tank was developed in much the same way as the Vindicator Siege Tank, and it is unclear in Imperial records which design was developed first or even if the Sabre was a variant of the Vindicator. In any event, it proved remarkably efficient in its role. Like the Vindicator, it was modified to carry a massive weapon in a limited-traverse mount on a heavily-armoured Rhino chassis.

While Imperial records are incomplete, it is believed that the Sabre is largely responsible for the dismantling of the massed armour formations once used by the Astartes. Near the end of the Great Crusade, the Mechanicum initiated the field testing of a new type of energy weapon known as the Neutron Laser Projector.

This massive weapon, whose origins lie in the Dark Age of Technology, was mounted upon a variant of the Spartan Assault Tank known as the Cerberus Heavy Tank Destroyer. Either shortly before or just after the outbreak of the Horus Heresy, the Mechanicum developed a smaller version of the Neutron Laser Projector known as the Neutron Laser Cannon. The Mechanicum then began to deploy Sabre Tank Hunters and Valdor Tank Hunters armed with Neutron Laser Cannons for anti-armour roles.

Once the Horus Heresy ended, the use of the Sabre began to decline and many of the newly-formed Space Marine Chapters were not provided with any of these vehicles at all, and instead were given Land Raiders and Predators to perform all their anti-armour needs. In addition, the Adeptus Mechanicus' capability to manufacture both the Laser Destroyer and the Neutron Laser Cannon was nearly lost and only a few Forge Worlds are still capable of building them.

Some Forge Worlds began to equip the Sabre with the more common Vanquisher Cannon, and while this allowed the Sabre to maintain its role as a powerful tank-hunter, the Vanquisher Cannon was much too heavy for the Rhino chassis to carry, and the ammunition too large for its cramped interior.

In the late 41st Millennium, the ability to produce Sabres is limited to a handful of Forge Worlds and its complex construction limits the number that can be produced per standard year. For this reason, many Space Marine Chapters treasure the few that they have in their armouries and employ them only in situations where their specialised abilities can be utilised to maximum effect.

The Vanquisher Cannon-armed version of the Sabre is the most common variant, but the Laser Destroyer version can still be seen amongst those few Chapters with the technical know-how to maintain them. The Aurora Space Marine Chapter is known to use both versions and it is speculated that they have enough Sabres in their Armoury to outfit an entire squadron. If true, the Aurora Chapter would have a considerable advantage against any other mechanised formation.

The Sabre Tank Hunter is equipped with a powerful Laser Destroyer that is mounted on the front hull and is off-set to the left side of the vehicle to provide increased stability and reduce the overall silhouette of the vehicle for enemy targetting sensors. The tank can also be equipped with a Siege Shield, much like the Vindicator, which gives it forwards protection from enemy attack. The Sabre can also be outfitted with a Vanquisher Cannon, but due to the weight of the weapon and its large shells, it is often too troublesome to be used effectively.

After the initial deployment and field testing of Neutron Laser Weaponry with the Cerberus Heavy Tank Destroyer the Mechanicum began to deploy Sabres equipped with a Neutron Laser Cannon, a weapon that is powerful enough to destroy its targets on the molecular level.

In the 41st Millennium this weapon is now only commonly found on the Imperial Guard's Valdor Tank Hunter and is extremely difficult to manufacture with the Imperium's current technology base. The Sabre can also be outfitted with a dozerblade if it lacks a Siege Shield, extra armour plating, a Pintle-mounted Storm Bolter, a Hunter-Killer Missile Launcher, improved communications equipment, a searchlight, and smoke launchers.

Until new information clears up this conflict, this page will hold as canon that the Sabre Tank Hunter was armed with the Vanquisher Cannon or the Laser Destroyer until the development of the Neutron Laser Cannon.

A Sabre Tank Hunter based on the Rhino Mark I chassis, armed with a Vanquisher Cannon 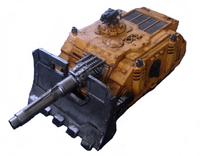 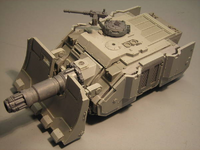 A Horus Heresy-era Sabre Tank Hunter that was used by the Imperial Army; it is equipped with a Laser Destroyer, a Siege Shield, extra armour plating, and a pintle-mounted Heavy Stubber
Español
Community content is available under CC-BY-SA unless otherwise noted.
Advertisement