The Sabre Gun Platform is a static heavy weapons platform used by Heavy Weapons Squads of the Astra Militarum and also by various Planetary Defence Forces to protect valuable assets and locations. The platform is most commonly used for light anti-air and ground defence roles, and is favoured by Imperial Guard armoured and support regiments.

Sabre platforms are also used to provide additional firepower during forward deployments or are rapidly deployed to fortify a position from attack, and are used by Imperial Guard Heavy Weapons Squads in place of man-portable weapons. However, the Sabre Gun Platform's lack of mobility means it is only used in this manner when a regiment is occupying static defensive positions.

The Sabre Gun Platform is a mobile heavy weapons platform that makes use of the same stabiliser leg mount as the Tarantula Sentry Gun, with the main difference between the two being that the Sabre is manned by a small team of soldiers, as opposed to the Tarantula which is automated using a Machine Spirit (artificial intelligence)-controlled logic engine. The Sabre features built-in auto-stabilisers to reduce recoil and improve accuracy of its mounted weapons. The platform's weapon mount can rotate a full 360 degrees and can also be aimed up and down, which allows the platform's crew to engage both low-flying enemy aircraft and enemy ground forces.

The platform's light structural weight can be easily assembled on the field by the weapon's team and then can be broken down fully for transport to a new location, although this process cannot be done when under enemy fire. Due to their inability to keep up with advancing or retreating forces, Sabre teams are expected to hold their ground regardless of any level of opposition. They will often form the last line of defence during a failing campaign and the majority of Guardsmen rightly consider that assignment to a Sabre battery can be a death warrant.

The Sabre Gun Platform is most commonly deployed in batteries consisting of up to three platforms and their crews. Each Sabre platform is crewed by two specially-trained Imperial Guardsmen, usually members of a Heavy Weapons Squad, although they can be assigned additional crew if needed. Only a single crewman is required to operate the weapon if circumstances require it. The crew of each Sabre platform is armed with standard-issue Imperial Guard weapons and wargear, most commonly a Lasgun.

All of these weapons have the ability to engage both ground and low-flying aircraft, with the exception of the twin-linked Lascannons, as their rate of fire is too low to be effective. These weapons, again with the exception of the Lascannons, are capable of being upgraded with an anti-aircraft mount, which makes the weapons more capable of targeting enemy aircraft by making them easier to move rapidly and aim upwards.

It is unknown if the Sabre platform can be outfitted with many other weapon combinations, such as single Heavy Bolters, Autocannons, Lascannons, and Heavy Stubbers, or even completely different weapons such as Plasma Cannons, Grenade Launchers, Missile Launchers, Multi-Lasers, Melta Weapons, Flamers, or Mortar weapons. The Sabre Gun Platform can also be outfitted with a large searchlight in place of a mounted weapon. These searchlights are used during night fighting to illuminate enemy positions.

The technical specifications for the Sabre Gun Platform have yet to be released by the Adeptus Mechanicus. 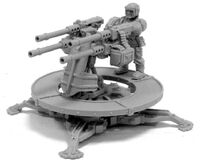 A Sabre Gun Platform armed with a set of Quad Heavy Stubbers; this loadout is most commonly used for anti-aircraft defence 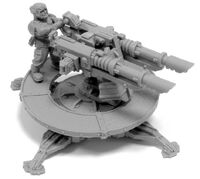 A Sabre Gun Platform armed with a set of twin-linked Lascannons, this loadout is most commonly used for anti-armour defence 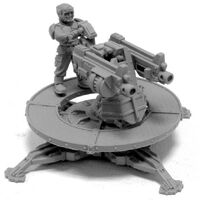 A Sabre Gun Platform armed with a set of twin-linked Heavy Bolters; this loadout is the most commonly used by the Imperial Guard and is preferred for anti-infantry defence 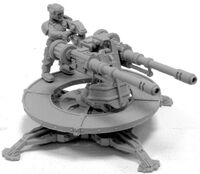 A Sabre Gun Platform armed with a set of twin-linked Autocannons; this loadout is most commonly used against a wide variety of targets 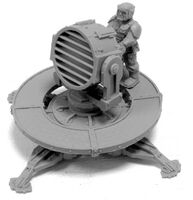 A Sabre Gun Platform equipped with a large Searchlight for night fighting; the weapon's searchlight teams only made use of a single crew member
Add a photo to this gallery
Retrieved from "https://warhammer40k.fandom.com/wiki/Sabre_Gun_Platform?oldid=348250"
Community content is available under CC-BY-SA unless otherwise noted.