The Rotary Missile Launcher is a rotary-style missile launching system that is used by the Chapters of the Adeptus Astartes on their Relic Sicaran Arcus Strike Tanks to replace the no longer manufactured Arcus Launcher originally used by the Arcus. The Sicaran Battle Tank was an Imperial main battle tank and one of the most advanced armoured vehicles ever used by the Imperium, and the Arcus variant was no different. The Arcus Strike Tank was originally part of a program once initiated by the Primarch of the Ultramarines Legion, Roboute Guilliman, seeking to grant a Legion strike force access to highly specialised weapon systems without the need to employ numerous vehicles for each role. The Sicaran hull was chosen to mount the newly developed Arcus Launcher, which was Capable of deploying with a wide range of warheads, each crafted to fulfil a distinct tactical niche during combat. The Arcus was intended to become the cornerstone of a new tactical doctrine the Master of Ultramar had begun to formulate, allowing small Legiones Astartes forces to operate without extensive support and in smaller numbers than during the Great Crusade.

Despite production of the Arcus being limited to a few prototype vehicles at the onset of the Horus Heresy, and the doctrinal issues that kept it out of production on most major Forge Worlds, a number of Legion home worlds produced small numbers of this variant. Of particular note is the inclusion of the Neutron-flux Warheads, a Terran development dating back to the years prior to the alliance with Mars. This weapon saturates the silica stratum of the Cybernetica Cortex employed by Mechanicum Automata with xenon, causing terminal cascade failures in these systems. The continued production of these weapons is believed to be the cause of the Mechanicum’s refusal to sanction the Arcus pattern, and its inevitable downfall. 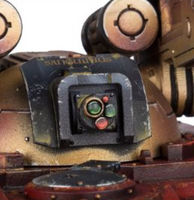 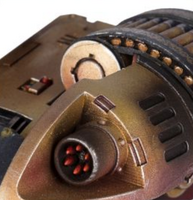 One of the Rotary Missile Launcher's rotary launch tubes
Add a photo to this gallery
Retrieved from "https://warhammer40k.fandom.com/wiki/Rotary_Missile_Launcher?oldid=320179"
Community content is available under CC-BY-SA unless otherwise noted.