Crude but easy to manufacture, the Ork Rokkit Launcha is a stout tube with a simple trigger mechanism that allows the Ork at the "safe" end to fire a dodgy-looking Rokkit in the general vicinity of the enemy. The Rokkit Launcha resembles a slapdash "Orky" version of an ancient Jermani (Germany) Panzerfaust; a single shot, hip-fired, rocket-propelled grenade. Rokkits can be loaded one at a time, or loaded automatically from a magazine if the weapon is a bit more complex than the usual slap-dash launcher. Unlike Imperial Missile Launchers, Rokkit Launchas can be used on the move with no noticeable loss of accuracy. Its simplicity makes it very easy to manufacture and it is a fairly common Ork special weapon.

Sometimes, Orks equip themselves with Rokkit Launchas to gives their mob the ability to shoot down armoured vehicles. In most cases, this weapon will find its way into the hands of a Tankbusta mob (the Ork equivalent of anti-armour infantry), but other mobs usually have one Ork armed with a Rokkit Launcha for every ten Boyz in the mob, making it one of the more common heavy weapons found amongst Greenskins. This allows mobs of Ork Boyz to have some response to armoured targets at range. Rokkit Launchas can also be found mounted on Ork vehicles like Killa Kans, Deff Dreads, Mega-Dreads, Junkas, Big Trakks, Ork Kill Tanks, Battlewagons, Looted Wagons, and Ork Battle Fortresses, as well as aircraft such as the Bommas, Fighta-Bommers and Warkoptas. Warbuggies and Deffkoptas are notable Ork vehicles that make use of twin-linked Rokkit Launchas for increased accuracy. When a Rokkit Launcha is combined with a Shoota, a potent Ork Kombi-weapon can also be made. 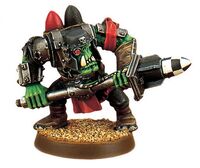 An Ork Boy about to fire his Rokkit Launcha 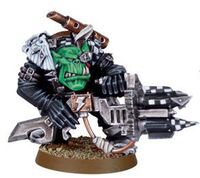 An Ork Tankbusta armed with a Rokkit Launcha
Add a photo to this gallery
Retrieved from "https://warhammer40k.fandom.com/wiki/Rokkit_Launcha?oldid=296603"
Community content is available under CC-BY-SA unless otherwise noted.