A Rod of Covenant is a symbol of office of the ancient ruling council of Necron nobility known as the Triarch and the primary weapon of Triarch Praetorians. A Rod of Covenant is a powerful weapon that resembles a staff with an ornate headpiece. Within the head of each weapon is caged a roiling fragment of a dying star bound within a potent-force field. The force-field itself is capable of burning through a foe's armour as if it were dry parchment, whilst the energies of the star fragment contained within can be released as blasts of potent viridian energy at extremely short ranges. The powers unleashed can even reduce a Necron to a smouldering pool of molten metal. When used against organic life forms, the blast is capable of bypassing even Terminator Armour. Organic creatures simply explode into clouds of flaming ash. A Rod of Covenant also functions in a similar fashion to Imperial Power Weapons, making it both a ranged and close combat weapon of some power.

A Rod of Covenant 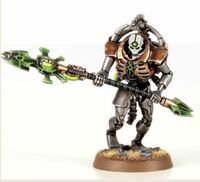 A Triarch Praetorian armed with a Rod of Covenant
Add a photo to this gallery
Retrieved from "https://warhammer40k.fandom.com/wiki/Rod_of_Covenant?oldid=288229"
Community content is available under CC-BY-SA unless otherwise noted.