Rippers (Minoris omniphagea) are a small, maggot-like species of Tyranids that serve as the primary means of devouring bio-mass from a planet for a Tyranid hive fleet. Indeed, Ripper swarms facilitate the speed and scale that Tyranids are infamous for in the stripping of a planet of all of its natural resources.

Rippers are the most numerous of the Tyranid creatures, and in great swarms they can pull down and consume creatures many times their own size. However, they are completely mindless and will perish if they lose a synaptic link with the Hive Mind, although while under its guidance they are utterly relentless and pose a truly horrifying threat.

During the final stages of a Tyranid planetary invasion, they scour the entirety of a planet, ingesting all biological material on the planet and leaving only an empty and desolate wasteland. Eventually, the Rippers will become bloated full of biomass, unfit for combat.

At this point, they simply crawl into Tyranid Reclamation Pools at the bases of impossibly tall Capillary Towers that project beyond the atmosphere, where they and the bio-mass they have fed upon are broken down and absorbed by the hive fleet for the creation of new Tyranid organisms and structures.

However, in some cases they may be evolved by a Norn-Queen to perform more advanced functions for the swarm depending on the genetic material they have absorbed.

In certain instances, hive ships have been driven away from a world by its defenders, leaving Tyranid ground forces left behind on the planetary surface isolated from the Hive Mind. In such circumstances, Rippers have been known to burrow below ground and then spend the time using their absorbed biomass to metamorphose into more advanced Tyranid bioforms.

This has led many among the Adeptus Mechanicus' Magi Biologis to believe that Rippers are an immature form of the prime Tyrancii genus.

This would mean that Rippers are theoretically capable of gestating into any other type of Tyranid bioform when given the right signals from the Hive Mind, potentially allowing Rippers to transform into any Tyranid bioform known, from a Hive Tyrant to a Hormagaunt.

Rippers possess serpentine bodies approximately half a metre long that terminate in a broad head above a set of vestigial gripping claws. The head is split by a wide maw filled with rows of exceedingly sharp ripping hooks and razor-edged boney ridges.

The Ripper's powerful jaws can bite through flesh and bone with alarming ease, and they have been known to gnaw their way through plasteel to reach food. Rippers are energetic and fearless organisms, quite capable of pulling down creatures many times their own size, from a rampaging Grox to an armed man.

Once a Ripper's jaws tighten around its prey, they stay clamped shut until a mouthful of flesh is torn away or the Ripper is slain. Huge swarms of Rippers are often seen on the battlefield, advancing behind Tyranid assault forces.

These small bioforms gorge themselves on the fallen, tearing apart the wounded and cannibalising the dead. It might appear that an armoured Space Marine would be safe from the attacks of individual Rippers, but en masse they can immobilise and drag down even the strongest battle-brother.

Though Rippers are one of the simplest of Tyranid organisms, different swarms often sport wildly different characteristics. Regardless of their genesis and purpose, all Rippers are equally deadly and not to be underestimated.

Sky-slashers are Tyranid Rippers adapted by the Norn-Queen to allow flight with the addition of bat-like wings. These winged terrors are increasingly common amongst Tyranid forces.

Indeed, the sky-mines of Kha'rull were completely overrun by Sky-slashers, and the automated defence batteries that had proven so effective against the larger winged Tyranid creatures were completely useless against the swarm of smaller and more maneuverable Rippers.

An eel-like Ripper is an as yet unnamed variant of the basic Ripper bioform that has been designed to devour all aquatic biomass on a world targeted by a Tyranid Hive Fleet for consumption. 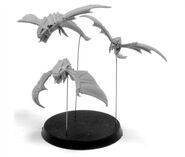