"Tread softly brothers, the foe is close and my blade thirsts for vengeance."

The Revilers is a Loyalist Space Marines Chapter and a rare Second Founding Successor Chapter of the Raven Guard. The ranks of the Revilers were drawn heavily from the Veterans of the original XIX Legion, those few survivors of the Drop Site Massacre of Isstvan V.

The Revilers maintain an ongoing shadow war with the Traitor Marine forces of the Alpha Legion, and have thwarted many of their insidious schemes.

During the Second Founding, when the original Space Marine Legions were partitioned at the end of the Horus Heresy, three new Chapters were sired from the gene-seed of the Raven Guard. The Revilers was one of these three original Second Founding Chapters of the XIX Legion.

The Revilers' ranks were drawn heavily from the Veterans of the original Legion, the few survivors of the Drop Site Massacre of Isstvan V disaster amongst them, and they have ever pursued vengeance against those Traitors who betrayed the Raven Guard on that fateful day.

The Revilers have proven to be worthy inheritors of their Primarch Corvus Corax, striking in battle with stealth and precision before fading back into the shadows.

In this way, they have bled dry countless foes, most recently a cell of the Alpha Legion -- the Revilers leading the Traitors on a lethal chase across every world in the Haedrax System before striking at their fragmented foes and annihilating them.

Like their genetic forebears, the Revilers abide by the tenets of the Codex Astartes, which details the organisation and tactical doctrines of the Space Marines, written after the great schism of the Horus Heresy had set Space Marine Legions against one another in a galaxy-wide civil war that almost destroyed the fledgling Imperium.

The Revilers specialise in jungle and wet-weather environment warfare. Like its progenitors in the Raven Guard, the Chapter specialises in guerrilla tactics behind enemy lines, using precisely coordinated attacks and refraining from frontal attacks or protracted attrition warfare.

The Chapter uses rapid maneuver engagements consisting of Assault Marines, Land Speeders and Assault Bikes aimed at harassment, sabotage and destruction of key targets over the direct engagement of enemy forces at large.

The Revilers also rely heavily on their Scout Marine elements, who operate without support for unusually extended amounts of time, even by Space Marine standards. The Chapter almost always combines small unit tactics with its preference for covert, behind-enemy-lines operations.

A black High Gothic numeral stenciled on the centre of the squad specialty symbol, as well as the left knee guard, indicates squad number.

Some company captains are known to paint their entire helm in their company's colour for better recognition on the field of battle.

The Revilers' Chapter badge is the profile of a human skull shot through from top left to lower right by a yellow lightning bolt, although some depictions forgo the lightning bolt. This is centred on a field of grey. 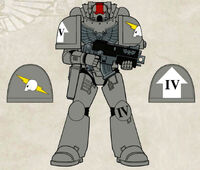 Predator Annihilator Endurus of the Revilers' 2nd Company (side view) 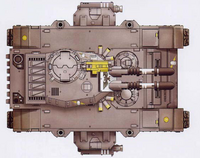 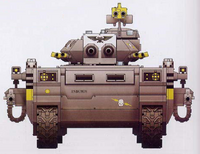 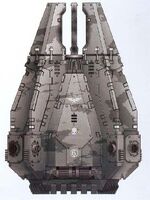 A Drop Pod in Revilers livery.
Add a photo to this gallery
Retrieved from "https://warhammer40k.fandom.com/wiki/Revilers?oldid=374765"
Community content is available under CC-BY-SA unless otherwise noted.