A Resurrection Orb is a mysterious Necron artefact that takes the form of a glowing, viridian sphere composed of an unknown material. With a gesture from the bearer, the glowing sphere focuses its energy into the regeneration circuits of the living metal bodies of surrounding Necrons, hastening their repair and causing the scattered remains of the bearer's destroyed warriors to crawl together before standing, ready to do battle once more.

Because of their rare nature, Resurrection Orbs are only ever carried by Necron Lords and Necron Overlords who usually participate in battle by sitting in the midst of the main Necron battleline. This allows them to bolster Necron forces in a range of about fifty metres so that they become nigh indestructible because of their enhanced regeneration.

The Orb of Eternity is thought to be the first Resurrection Orb ever created. For millennia, it rested in a primitive fane on the world of Ormandus, where the indigenous populace marvelled at its seemingly divine ability to effect repairs upon their technologies.

Ever since this state of affairs was righted by a host of Triarch Praetorians, the orb has been imparted as a boon to those Necron nobles who are deemed worthy of such incredible power. 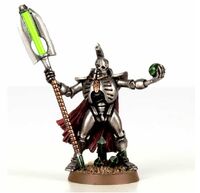 A Necron Lord holding aloft his Resurrection Orb
Add a photo to this gallery
Retrieved from "https://warhammer40k.fandom.com/wiki/Resurrection_Orb?oldid=351631"
Community content is available under CC-BY-SA unless otherwise noted.