"All praise the Repulsor Executioner, whose reactor roars with the sacred fires of Mars. Thanks we give for the hammering indomitability of its gravitic repulsion plates. Thanks we give for the destructive wrath of its heavy laser destroyer, and for the molten solar ferocity of its macro plasma incinerator. The Omnissiah's praise we cry from on high for the bellicose machine spirit that drives the Repulsor Executioner onwards, and the mystical energies that raise it up and propel it into war. Deus Omnissiah gloriatum maximus! Bane of heretics, destroyer of aliens, slayer of war engines, Repulsor Executioner, let thine hatred now be unleashed!"

The Repulsor Executioner is a variant of the Repulsor anti-gravitic main battle tank used by the Primaris Space Marines of many different Chapters.

It is the most heavily armed battle tank commonly available to the Adeptus Astartes in the late 41st Millennium, and possesses a rare combination of maneuverability and tactical flexibility.

The designs for the first Repulsor Executioners were heavily inspired by the versatility of the Razorback armoured personnel carrier. Like the Razorback, the Executioner sacrifices a portion of its troop transportation capabilities so as to house additional capacitors, plasma cells, ballistic cogitators and other, more esoteric machineries.

For millennia Mankind had lost the secrets to constructing anti-gravity devices, with only a few relics from the Age of Technology remaining. It was the discovery of an ancient STC by the famed Arkhan Land that led to a breakthrough in rediscovering and restoring this potent technology to the Imperium during the Great Crusade.

The ancient Mechanicum and its Adeptus Mechanicus successor was able to once more produce anti-gravitic generators and impeller units that -- while nowhere near as elegant or refined as those heretical technologies used by certain xenos species like the Aeldari -- were robust, reliable and could be adapted for use on a variety of hulls, from light reconnaissance craft like the Land Speeder right up to the Astraeus super-heavy grav tank.

After the opening of the Great Rift, with the direct sanction of both Roboute Guilliman as Lord Commander of the Imperium and the Fabricator-General of Mars, a select handful of chosen tech-priests like Archmagos Dominus Belisarius Cawl continued research and development into new gravitic battle tanks with which to bolster the battle lines of the Adeptus Astartes. The Repulsor Executioner was one fruit of those labours.

Though some Chapters, such as the Iron Hands and the Aurora Chapter, use Repulsor Executioners as armoured escorts for their dedicated troop-carrying tanks, many favour them as transports for Hellblasters and other specialist Primaris squads.

In this capacity, the tanks thrum across the battlefield with guns blazing. Whether armed with Macro Plasma Incinerators or Heavy Laser Destroyers, the Executioners unleash fusillade after punishing fusillade, their primary armaments combining with a wealth of secondary weapons to blast the enemy into ruin.

Should an enemy somehow survive its attack, the Repulsor Executioner can also deploy a squad of Primaris Space Marines to finish them off. The vehicle can transport 6 Primaris Marines in standard Mark X Tacticus Power Armour or 3 in the bulkier Mark X Gravis battle-plate.

Like the Repulsor, Repulsor Executioners are able to discharge directed pulses of gravitic force through their ventral grab plates; these they unleash right before their passengers disembark, smashing any surviving foes flat and leaving them suppressed and helpless as the Primaris battle-brothers leap from their transports' hatches to deliver their kill-shots.

The technical specifications of the Repulsor Executioner main battle tank have not yet been made available by the Adeptus Mechanicus. 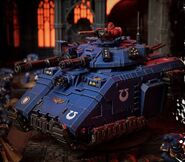 An Ultramarines Repulsor Executioner armed with a Heavy Laser Destroyer moves into battle. 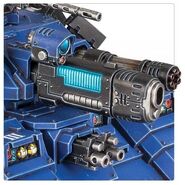