The Repressor is an Imperial armoured personnel carrier (APC) based on the standard Rhino chassis. The Repressor is used by both the Adeptus Arbites as a riot control and crowd suppression vehicle, and by the Adepta Sororitas as an infantry transport during intense urban battles. The Repressor uses an extensively converted Rhino chassis; the transport compartment has been greatly expanded upon, a raised roof featuring firing slits for the passenger's weapons has been added, a large dozer blade used to plow through debris and rioting mobs is attached to the front of the vehicle, and the vehicle possesses a small forward cupola-mounted turret. The Adeptus Arbites variant of the Repressor is armed with non-lethal weaponry such as water cannons and grenade launchers that fire stun and gas grenades at angry mobs. When the Adepta Sororitas started to use Repressors near the end of the 40th Millennium they replaced the non-lethal weapons with Storm Bolters and Heavy Flamers.

The Repressor has been used as a combat transport by the Sisters of Battle for only a short amount of time. The first incidence of the Sisterhood using the Repressor was during a heretical uprising on the Cardinal World of Avignor, when a crowd of over a million pilgrims gathering for the Day of Ascension rituals were incited into violence by provocateurs of a heretical faction. The massive mob of people quickly overran the local Adeptus Arbites Precincts, and the situation only grew worse when the mobs started equipping themselves with scavenged Arbites weapons. The unrest transformed into a full-scale war when the Heretic agitators began to direct the mobs towards important Imperial locations, such as armouries. The Adeptus Arbites were offered assistance from the Order of the Sacred Rose's Preceptory, who were guarding the Cardinal of Avignor's Palace. The Battle-Sisters crewed a dozen of the Arbites' Repressor vehicles, outfitted them with their favoured Heavy Flamers, and then took to the field to purge the Heretics and their followers from the sacred ground of Avignor. After two weeks of street fighting the uprising was defeated and the commanding Arbites Marshall gifted the remaining Repressors to the Canonness-Preceptor of the Order of the Sacred Rose as thanks for their intervention.

For many years after the battle at Avignor, only the Sisters of the Order of the Sacred Rose used the Repressor. Other Orders within the Ecclesiarchy whispered that it was not just or holy and that the Order should be restricted from using it any further. The issue over the sanctioned use of the Repressor came to a head during the 291st Synod Prioris of Terra, where it was decided that the use of the Repressor by the Sisters of Battle during the Avignor Uprising was the will of the Emperor, and that the Repressor should be included in the canon of sanctioned vehicles for all of the Orders Militant of the Sororitas.

The Repressor used by the Adepta Sororitas is not designed to serve as a front-line vehicle, but is instead used during urban conflicts where the Sisters can travel in safety inside of the vehicle, and fire at enemy combatants from the firing slits. The Repressor is capable of carrying up to ten Battle-Sisters, and of these ten, six may fire their Bolters out of the firing slits. Also, a heavy weapon such as a Heavy Bolter or Multi-Melta can be fired out of the top hatch, but only when the vehicle is sitting still. The Repressor is armed with a forward cupola-mounted Storm Bolter, and a Pintle-mounted Heavy Flamer. All Repressors are equipped with dozer blades used to smash through road blocks and debris. The vehicle can also be outfitted with other upgrades such as a Holy Icon, Blessed Ammunition for the Storm Bolter and Holy Promethium for the Heavy Flamer, a Hunter-Killer Missile Launcher, Laud Hailers, extra armour plating, a searchlight, and smoke launchers.

Notable Users of the Repressor

A Repressor belonging to the Order of the Sacred Rose

A Repressor belonging to the Order of Our Martyred Lady 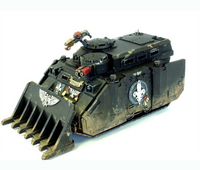 A Repressor in use by the Adepta Sororitas 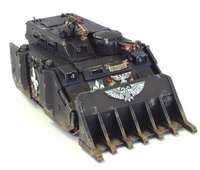 A Repressor as seen from the front 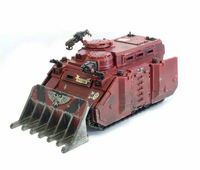 A Repressor as seen from the side 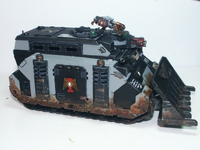 A Repressor belonging to the Adeptus Arbites; this Repressor has been rearmed with lethal weapons
Español
Community content is available under CC-BY-SA unless otherwise noted.
Advertisement