The Remote Sensor Tower is another piece of T'au equipment newly encountered by the Imperium. It is an information relay station which scans the surrounding area and relays data on enemy movements to other T'au units in the vicinity.

It incorporates advanced ground sensors, its own Marker Light system and is capable of relaying targeting information that is used to guide other attacks. The tower mounts no weaponry, and as such is considered an expendable asset by the T'au Fire Caste.

The Remote Sensor Tower was first encountered by Imperial forces late in the Taros Campaign. The vanguard of the 114th Cadian Regiment of the Astra Militarum met these tall, thin towers as they advanced towards Hydro-Processing Plant 23-30. Soon afterwards, their columns came under attack from long-range Seeker Missile strikes, losing several Chimeras in the assault.

The towers were also supported by swift Piranhas squads that mounted the Seeker Missiles and that were able to harry the Cadian columns and inflict casualties far outweighing their own numbers on the field. The resulting delays meant that the force of Elysian Drop Troops surrounded at Plant 23-30 never received relief, and their position was eventually overrun by the T'au.

The Remote Sensor Tower resembles a smaller version of the Drone Sentry Turret, but instead of weaponry inside, it has a tall aerial which telescopes upwards to give the sensor equipment a high vantage point for scanning. It is constructed of the same nano-crystalline compound used by other T'au vehicles, albeit in far thinner layers.

The T'au Empire use Remote Sensor Towers as area denial weapons, making it difficult for enemy units to move without drawing immediate attack. In this way, they act much like a conventional minefield, slowing the enemy advance and making movement dangerous rather than halt an advance on its own. Camouflage is commonly used to match the terrain and make them difficult to spot, and they mount a complex array of sensors that allow it to comprehensively scan and catalogue the surrounding area. Remote Sensor Towers are also used by the T'au in place of more traditional garrison forces. Any enemy troops encroaching on ground claimed by the T'au Empire can be detected by these devices long before they arrive, allowing Hunter Cadres to efficiently respond to the incursion. Counter-attacking T'au troops are then fed telemetry and targeting data by the towers as they engage the enemy, enabling them to rain down fire with pinpoint accuracy and launch Seeker Missiles guided by the towers’ built-in Marker Lights. As yet, the Remote Sensor Tower's full functions remain unknown, as none have yet been captured intact.

Each Remote Sensor tower is lightly armoured and often camouflaged to match the terrain around it. They are usually equipped with the following capabilities:

A Remote Sensor Tower encountered by the 114th Cadian Regiment during the Taros Campaign; due to a lack of awareness of its purpose, several Chimeras were lost to Seeker Missile strikes before the tower was destroyed 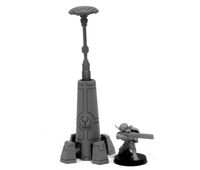 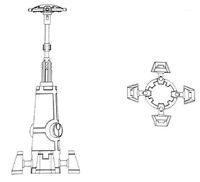