A Reiver, who is usually part of a Reiver Squad, is a close support combat specialist unique to formations of Primaris Space Marines who is tasked for rapid infiltration and lightning assaults. Where the Intercessors are the battleline heavy infantry of the Primaris Astartes, the Reivers are elite assault specialists given special training and wargear.

Reivers are masters of terror tactics, breaking from stealth in a cacophony of bolter fire, grenade detonations and guttural, vox-amplified roars. Whole enemy units are scythed down in a burst of sudden fury and shocking violence before the Reivers fade back into the shadows.

The Mark X Phobos Power Armour worn by Reivers has been modified to display a skull-faced helm, to possess enlarged left-side pauldrons to enhance their protection in melee situations and to run completely silently.

Reivers are armed primarily to engage in close combat, and all make use of Combat Knives, Power Swords, heavy Bolt Pistols and handheld, deadly versions of the Bolt Rifle. Reivers can also stun enemy infantry with Shock Grenades or deploy deep behind hostile lines via Grapnel Launcher or Grav-Chutes.

In the Codex Astartes, Roboute Guilliman has been very clear about the role and importance of close support squads. A well-coordinated and perfectly-timed assault can break the back of any foe, cracking open their lines and sending the remnants of their army fleeing. To make such breakthrough attacks, the designated troops must be fast, aggressive and hard-hitting.

All Space Marines are experts of the rapid strike, but Primaris Marine Reiver Squads take such skills to the next level. They are specially trained and equipped to launch brutally effective and unexpected assaults. They do so with a sudden fury and shocking violence, for the Reiver Squads fulfil the role of terror troops that sow fear and confusion amongst their foes.

Each member of this Primaris squad is outfitted in Mark X Reiver Power Armour, also known as Phobos Armour. The suit's lighter-weight ceramite and streamlined design allow for greater mobility, and its servo-motors are engineered to be completely silent. Above all else, Reiver Squads depend on stealth and secrecy to accomplish their missions.

To aid them in their role, some Reiver Squads are equipped with Grav-Chutes, allowing them to be air-dropped to the battlefield from fast-moving transport craft. Using directional fins, the Reiver Squad can glide to their destination from high altitudes and pull out of steep descents when deploying from high-velocity aircraft, hugging terrain contours while flying dangerously low.

Without the fiery contrails of Jump Pack-equipped drop troops or the blinding Warp energies of teleportation, Reiver Squads can descend unnoticed behind enemy lines before silently getting into position. Reivers can also use grapple guns to scale vast heights and cross from building to building. Whatever their method, Reivers are unparalleled in their ability to be in exactly the right place at exactly the right time, ready to burst forth and attack their foe when they least expect it.

There is nothing that can prepare an enemy for the savage suddenness with which the Reivers attack. Emerging from some unforeseen angle, the members of the Reiver Squad launch themselves into battle amidst the raucous noise and explosions of their expertly-thrown Shock Grenades.

The time for silence is over, replaced with a cacophony of sounds that batters the enemy -- wave-amplified blasts of specially modified Bolt Carbines, the keening of slicing Combat Knives, and the augmented guttural roars of the warriors themselves.

Moving quickly, shooting and slashing at superhuman speeds, the Reiver Squad annihilate their targets. Such an unpredictable assault also unnerves those nearby, for the strike is enough to set even well-trained, professional soldiers on the back foot.

Against less disciplined troops, the Reiver Squad is more devastating still -- the ferocious destruction of one enemy group can set off a chain reaction of panic that ripples down the line as the roaring Reivers move to bring down their next target.

Many Chapters have incorporated Reiver Squads into their attack plans, perhaps none more successfully than the Raven Guard and the White Scars. At the opening strike against the heavily fortified palace of the corrupt planetary governor of Troxx, the Raven Guard had their Reiver Squads emerged just as the Drop Pod assaults began.

Within moments, kilometres of trench lines were cleared of rebels, with those manning secondary and tertiary defence lines abandoning their posts as well in a panic that swiftly turned into a bloody rout.

As for the White Scars, their hit-and-run attacks have become even more ferocious with Reiver Squads arising to ambush any foes attempting to reorganise their shattered defence lines. 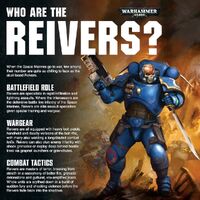 An illustration of a Primaris Space Marine Reiver of the Ultramarines Chapter in combat. 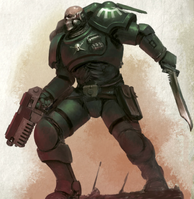 A Reiver of the Dark Angels Chapter.

Ultramarines Reivers slip through the shadows, their gleaming Combat Knives poised for the kill.
Español
Community content is available under CC-BY-SA unless otherwise noted.
Advertisement