"Some have called us the Angels of Death. It is a name well chosen, for we bring redemption to those who need it the most -- the cold and final redemption of the grave."

The Redemptor Dreadnought is a new pattern of Adeptus Astartes Dreadnought specifically created to serve alongside the Primaris Space Marines. It, like the standard pattern Castraferrum Dreadnought, is intended to provide mortally wounded Primaris Astartes with another chance to continue to serve the Emperor.

Redemptor Dreadnoughts are giant war engines that crush bone and splinter skulls as they bludgeon through the enemy ranks. Taller, broader and more cunningly wrought than the Dreadnoughts of traditional design, these goliaths of battle are powered by hyper-dense Plasma Reactors and sophisticated fibre bundles.

They can accelerate from a thudding stomp to a thunderous, loping gait that shakes the ground, barrelling through hails of fire in glorious defiance.

One jointed arm of the Redemptor is given over either to a devastating Heavy Onslaught Gatling Cannon -- a rotary ballistic weapon that can chew through a band of Heretic Astartes in a single pass -- or a Macro Plasma Incinerator, a weapon that harnesses the heat of captive suns to melt enemy tanks to bubbling sludge.

The other arm ends in an articulated Dreadnought-sized Power Fist of advanced design called a Redemptor Fist. With this pistoned gauntlet the Redemptor can tear even Tyranid bio-beasts and Daemon Engines apart at close quarters.

Such is the miraculous design of the Redemptor's neural links that its inhabitant, despite being entombed in a box-like sarcophagus within the Dreadnought's torso, can exercise control with surprising dexterity and speed.

Yet it is whispered that the advanced systems of the Redemptor are a curse as well as a blessing.

The Martian tech-savants in the service of Archmagos Dominus Belisarius Cawl who first built these walking machines of destruction spared little thought to the health of the incumbent, seeing him as little more than another part to be interred or replaced as necessary.

Many of those Redemptors that have fought for a sustained period have already had their sarcophagi replaced, their original pilots burned out by the intensity of the machine's destructive prowess. 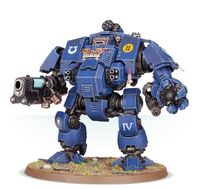 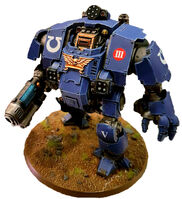 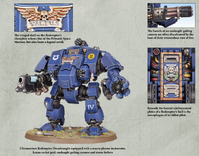 A Redemptor Pattern Dreadnought of the Dark Angels Chapter 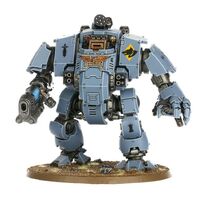 A Redemptor Dreadnought of the Space Wolves Chapter