"And this land shall be yours, that you shall be its masters and its peoples bow down to you."


— The Charter of Founding of the Red Talons, by the hand of High Lord Hanikhas

The Red Talons is a Loyalist Space Marine Chapter and a Second Founding Successor Chapter of the Iron Hands.

The Red Talons were founded from a portion of the Iron Hands Legion's Morragul Clan, made up primarily of outcasts and the most unstable elements of the Xth Legion, who fought and died under the merciless command of their bloody-handed clan commander, the Iron Lord Autek Mor.

Since their founding at the end of the Great Scouring, the Red Talons have been known for their bold style of warfare and never-ending vendetta against the Traitor Legions.

Several times the High Lords of Terra have tasked the Red Talons with hunting down and destroying Renegade Chapters, a duty they discharge with relish.

The Red Talons' fortress-monastery is located on their homeworld of Raikan in the Segmentum Tempestus.

The Red Talons can trace their heritage back to the dark days of the galaxy-wide rebellion known as the Horus Heresy, which began in the waning days of the Great Crusade in the early 31st Millennium.

This bloody-handed Chapter is descended from the ranks of the infamous Morragul Clan Company of the Iron Hands Legion, led by its unforgiving master, Autek Mor, who was both Iron Lord of the clan and an Iron Father of the Xth Legion.

Mor held a sinister reputation within his Legion, and dark rumours accompanied him long before the outbreak of the Horus Heresy, including whispered accusations that the origins of his gene-seed or perhaps his bloodline were not as they should be.

A Terran by birth, he was part of the Xth Legion's first intake and fought in the re-conquest of the Sol System during the early Great Crusade. He held field command by the time of his primarch's finding on the world of Medusa, having already developed a reputation both as a weaponsmith and malevolent soul.

Mor was known to have killed several members of his own Legion in duels over "slights to his honour," and to rule his company with a cruel and unforgiving fist.

On the Xth Legion's new homeworld, Medusa, he took over the outlaw Ra'Guln Clan's leviathan crawler in a bloody night of violence and made himself its lord, imprinting on it his name and will.

In the years that followed, his Morragul Clan became a sink for the outcasts and most unstable elements of the Iron Hands Legion, who fought and died under Mor's merciless command. No love was later lost between Autek Mor and his primarch.

Despite the enmity between the primarch of the Iron Hands and the lord of the Morragul Clan, when his grand cruiser, the Red Talon, arrived at Isstvan V as the void battle of the Drop Site Massacre was at its height, he bravely attempted to go to his primarch's aid.

During the infamous events which would become known in the annals of Imperial history as the Drop Site Massacre, three Loyalist Astartes Legions -- the Iron Hands, the Salamanders and the Raven Guard -- were betrayed by the four other Legions of the supposedly Loyalist second wave sent to defeat Horus' Traitors at Isstvan V -- the Alpha Legion, Night Lords, Iron Warriors, and a large contingent of Word Bearers -- who they had believed were loyal to the Emperor of Mankind.

In fact, the Space Marine Legions of the second wave had already betrayed the Imperium and secretly turned to the service of the rebellious Warmaster Horus and Chaos.

The Red Talon, flagship of the Iron Hands' Morragul Clan, was one of the first Iron Hands vessels to arrive in the Isstvan System after the treachery of the Loyalist reserves had been revealed, breaching into realspace amid the titanic space battle that had erupted between the Loyalist and Traitor fleets.

Autek Mor ordered his ship to attempt a breach through the firestorm to reach the surface of Isstvan V, and the infamously powerful grand cruiser succeeded in punching through the void battle, but took such heavy damage that it was forced to bypass Isstvan V and flee, managing to escape, unlike many of the Iron Hands starships that would later arrive.

Vengeance of the Red Talon

Among the Iron Hands Legion, many Astartes had been driven to stark madness by witnessing their gene father's end on Istvaan V and threw themselves wholesale into the crucible of war as if to absolve this terrible loss with their own deaths.

Yet a substantial number of Iron Hands Legionaries had extricated themselves from the massacre, and while few had made it off the surface of Istvaan V, many more had survived the calamitous void ambush of the Legion's fleet, breaking away and scattering across the stars. Some would form isolationist bands, fighting their own private wars against the Traitors, such as the infamous "Red Talons" of Autek Mor.

One of this warband's more notable campaigns took place in the Coronid Deeps within the Gethsamaine System. The first great blow struck against Traitor control of the Coronid Deeps came from the outer darkness of the Grail Abyss.

More than a standard year previously, in 005.M31, the Gethsamaine System had submitted to Horus without resistance and this obeisance had spared them the worst of the war's deprivations. The system's only inhabited world, Gethsamaine Colonus, had been forced to suffer newly imposed overlords in the shape of Tithe Acquisitors bearing the serpent's eye of Horus for a Dark Compliance action, where once they had displayed the raptor-headed Seal of Terra.

Under their directions, the industries of Gethsamaine now laboured, and the planet's vast rain forests were being clear-cut to provide fodder for off-world export, but other than the Acquisitors' harsh quotas, little in truth had changed for the people of Gethsamaine.

But just as the unexpected arrival of a lone survivor from the Istvaan System in 006.M31 had gone on to herald the dawning of the terrible war that was to follow, so a second survivor of that great treachery heralded a new wave of conflict.

When the ill-starred Warp route from the haunted Grail Abyss tore open once more, the vessel that cut into realspace with dreadful purpose was no derelict outfitted in Emperor's Children purple as that first survivor-ship had been, but a jagged and scar-hulled killer in black and crimson.

It was the Red Talon, the ship of the Iron Hands Clan Morragul, and its master, Autek Mor. Gethsamaine had been stripped of much of its void defences in the Traitors' passing and now it stood all but naked before this spectre of the Imperium's grim retribution.

The few remaining orbital gun platforms which protected Gethsamaine Colonus were quickly swept away by the attacking grand cruiser, and a ruthless bombardment of the planet from low orbit immediately commenced as preparation for a ground assault. Then came the grim sons of Medusa to enact the Emperor's judgement.

Any resistance to the Iron Hands was swiftly obliterated, and an entire cohort of planetary militia and their Horusite overseers were crushed beneath the treads of Clan Morragul's armour in less than a solar hour. This resulted in a general rout for the defenders.

Wasting no time, the world's seats of government were blasted to rubble, and those in positions of power that had aided the Traitors or sided with their cause were methodically hunted down and executed, save for a select number of prisoners deemed to have potentially useful information, who were dragged screaming back to the Red Talon's gunships.

As the Iron Hands Thunderhawks blasted off from the surface, the bulk of the civilian population, which had fled into hiding during the sudden assault, nervously rejoiced and came forth, little knowing what would come next. In each of the five major cities of Gethsamaine, the Iron Hands had left behind an improvised atomantic device fashioned by the bloody hand of their Iron Father, each bomb sheathed in layer upon layer of radioactive material designed to enrich and multiply the fallout generated by its detonation a hundred-fold.

The Red Talon broke orbit just as the cities bloomed into nuclear fire; sentence had been passed on both the Traitors and those who had knelt before them, and notice served that there could be no bystanders in this terrible civil war, no civilians to be given quarter, only Loyalists and Traitors to the death.

Shadow War of the Red Talon

The full role in the Horus Heresy taken by the independent battlegroup under the command of Autek Mor is impossible to collate. Nevertheless, fragmented accounts of dozens of battles are extant in the scattered records of the era.

Some list no more than the warlord's name, soon a byword for destruction behind the Traitor lines, and can therefore be considered apocryphal, while others are more complete, offering a tantalising glimpse into the many shadow wars of this bloody age.

One such substantiated account is the destruction of the Traitor Mining World of Saria Major. Here, the Red Talon unleashed an orbital bombardment that scoured the hive-refineries from the planet's surface and condemned the surviving population to a slow death in the poisoned aftermath.

Viable imagery also places Autek Mor himself at the Battle of Locurtar Station, where his personal forces, the so-called Bloodwrought, counter-attacked a Sons of Horus-led company poised at the moment of victory over a holdout Loyalist garrison and routed it.

Less certain is Mor's involvement at Kvalgron, where it is known that a powerful Loyalist fleet ambushed a heavily escorted Traitor-aligned supply convoy heading to the staging grounds at Paramar, capturing or destroying the entire convoy in twelve solar hours of bitter void warfare.

Likewise, the incident at Nashe's World, where a Death Guard extermination detachment was destroyed amidst the cyclopean xenos ruins that towered over the deadly jungles, has often been attributed to Autek Mor, but no firm evidence remains extant for this.

In the wake of the calamity that was the Horus Heresy and the entombment of the mortally-wounded Emperor within the Golden Throne, the foundations of the Imperium of Man were reformed.

In 021.M31, the Second Founding of the first Successor Chapters of the Adeptus Astartes commenced. The Red Talons were one such Successor Chapter, formed after the end of the Great Scouring from those battle-brothers of the Iron Hands Legion who were the most volatile and bloody-handed of the sons of the Gorgon, and were disposed towards aggressive and bold styles of warfare.

Furthermore, the events of the Horus Heresy had imprinted upon this Chapter an unstoppable drive to continue to avenge the treacheries committed by the Traitor Legions. The sinister Iron Lord Autek Mor was given command of the newly created Chapter, becoming its first Chapter Master.

The Red Talons are known to possess at least 2 strike cruisers, including:

A white High Gothic numeral is stenciled in the centre of the squad specialty symbol, indicating squad number.

The Red Talons' Chapter badge is a crimson talon, centred on a black roundel.

This symbol is reminiscent of the distinctive crimson heraldry of the Iron-Lord Autek Mor's personal guard, the Blood Wrought, as well as the Clan Company icon of the Morragul Clan of the Iron Hands Legion of old. 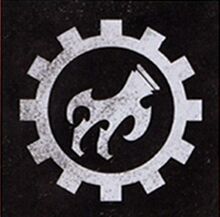 Ancient Iron Hands Legion Morragul Clan Iconography that served as the precursor to the Red Talons' own current Chapter badge.

A Pre-Heresy Iron Hands Devastator Marine in Mark IV Maximus Power Armour; this is Ironwrought Veur, a member of the Morragul Clan, which was led by the infamous Iron Lord Autek Mor; note that Veur bears the distinctive crimson heraldry of Autek Mor's personal Clan Honour Guard, the Blood Wrought, the precursor iconography that would later be utilised by the Red Talons Chapter. 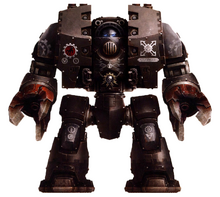 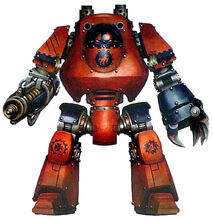