— Red Hunters Chaplain Landrath. Invocation before the first assault on the Citadel of Vraks during the Siege of Vraks

The Red Hunters is a Loyalist Space Marine Chapter of unknown origins and Founding that has strong ties to the Inquisition.

The Red Hunters Chapter has a long history of putting itself at the service of the Inquisition and the entire Chapter has been known to serve under the command of an Inquisitor Lord on certain occasions.

What little is known about the Red Hunters Chapter suggests that it may have been founded immediately following the Horus Heresy, and was intended to hunt down and eliminate the Traitor Legions.

So strong is the link between this Chapter and the three great Inquisitorial Ordos that rumours abound that it has been founded at the request of the Inquisitorial Representative on Terra, and that there was a secret pact between the Inquisition and the Chapter for mutual support.

The Chapter is tied to the Inquisition by ancient bonds of honour and duty and is often called upon to face the servants of the Ruinous Powers and other fell enemies of Mankind. Fighting in Inquisitorial strike forces and providing honour guards for the most senior Inquisitor Lords, the Red Hunters have confronted numerous horrors no mortals can face and be allowed to live should they survive, lest they taint others.

When Imperial forces serve alongside certain units of the Inquisition, many witness the full horror of a daemonic incursion or similar phenomenon. When those of the Imperial Guard or similar types of Imperial warriors witness such things, a common protocol that is utilised is that they are often put to death soon after, a mercy considering the corruption and insanity that will inevitably have taken root in their mortal hearts.

As such, the Chapter's line brethren are routinely subjected to a mnemonic purgation ("mind-wipe") rite, a protocol that preserves their souls and their physical abilities, albeit at the cost of their memories, skills, experience and personality. This makes them an even more valuable weapon in the hands of the secretive and often necessarily brutal Inquisition.

Many of the vehicles within the Chapter armoury appear to have served in many Inquisition-led operations, for their hulls are often etched with countless battle honours. Yet, key honours are often deliberately removed while others are unknown to the Red Hunters Chapter archives.

What glories go unrecorded, having been expunged from the minds of the Chapter's brethren, as well as redacted from such rolls of honour as adorn the armoured flanks of their vehicles and assault craft, must remain unknown forevermore for the sake of the Imperium and those who shelter within it.

The Red Hunters' most famous exploits came during the Siege of Vraks, an Imperial Armoury World that was seized by the Forces of Chaos under the control of the Apostate Cardinal Xaphan in 812.M41, and was liberated by the Imperial Guard with aid from the Inquisition and numerous Chapters of the Adeptus Astartes in 830.M41.

Although still a Chapter of Space Marines that looks to the Codex Astartes for its organisation and spiritual guidance, the Chapter makes its squads available for rapid responses to Inquisitorial calls for assistance.

Often times, an honour guard of Red Hunters squads is called forward to the frontlines to provide personal protection to high-ranking Inquisitor Lords.

The Red Hunters Chapter fleet is known to contain the following starships:

The Red Hunters follow the dictates of the Codex Astartes in most regards. The Red Hunters' Power Armour is painted red with golden trim on the shoulder plates and a silver Aquila. The eyes of a Red Hunter's helm are green.

According to the Insignium Astartes the Red Hunters originally denoted what company a battle-brother belonged to by the colour of the trim on their shoulder guards. It is notable that in recent decades they have ceased displaying company-specific colours, and all companies now sport golden trim instead.

In the line companies, a golden helm stripe denotes a battleline squad's sergeant. A line company Veteran brother assigned to a combat squad has no golden left knee guard.

Instead the High Gothic numeral identifying company number is painted in white/silver to demonstrate the battle-brother's Veteran status.

In addition they will often display a golden sigil on the front of their helm, notably an inquisitorial stylised "I".

The elite brethren of the 1st Company bear either white or silver heraldic bands on their helms, while squad sergeants often render the entire helm in the chosen colour.

No squad number is depicted on Veteran brothers in Terminator Armour.

The Red Hunters' Chapter badge is unique amongst Chapters of the Adeptus Astartes, as it bears the symbol of the Inquisition prominently on the the Chapter's heraldry: a large white skull, indicating the formalised bonds between the two bodies. This skull is centred on a field of red. 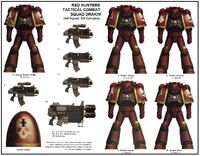 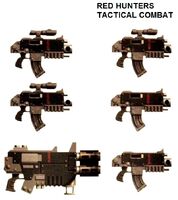 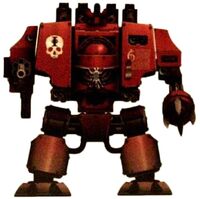