A Recon Drone (Kor’vesa in the Tau Lexicon) is a type of Tau Drone (small, sleek, disc-shaped, semi-sentient machines) employed extensively alongside Tau units in battle. Recon Drones have to date only been deployed as part of Pathfinder reconnaissance teams during the Third Sphere Expansion. All Recon Drones are somewhat larger than standard mobile Drones in size, and this is primarily due to the specialist equipment they carry. Recon Drones most commonly accompany Pathfinder Teams making use of Devilfish transports, as their special design allows them to fit into the top of the vehicle instead of the usual cupola hatch. In this way they are still able to use their support technologies whilst being transported during missions. Recon Drones are primarily armed with a centre fold-away Burst Cannon, which is a multi-barreled weapon capable of sustaining high rates of anti-infantry fire. They also carry Homing Beacons and Positional Relays to better aid the deployment of Tau troops such as Battlesuits that have been held in reserve into combat. A Homing Beacon is a multi-spectrum homing device that, when activated, allow the Hunter Cadre's reinforcements to deploy with pinpoint precision, whilst a Positional Relay is a device that records detailed battlefield data and relays it in a tight-band, encrypted radio burst to Tau assets in orbit, allowing them to better coordinate forces operating in strategic reserve.

Recon Drones consist of an advanced processor unit, which individually has only a basic intelligence (approximately equal to that of a small animal such as a pterasquirrel), and moves about by way of a small anti-gravitic generator and a smaller and much modified version of a Tau Jetpack. This allows the Recon Drone to hover over the ground and skim over most obstacles. As they hover over landscapes, rotating back and forth, their sensor vane constantly transmits vital information about their surroundings.

Recon Drones that are attached to a Tau squad can be controlled by a Drone Controller, whether it is in the form of a support system for a Tau Battlesuit, or a hard-wired piece of wargear for Tau infantry. A Drone Controller is an electronic device that can be used by the Tau to further enhance their control over their robotic companions. A Drone Controller acts as a hub of digital communications between the Drone's operator and any Drones that are nearby the user. It serves as an advanced interface between the operator and the artificial intelligence (AI) combat programs of the Drones, and is often used to direct the Drones’ firepower far more efficiently and with a level of accuracy far greater than would otherwise be possible on the battlefield.

So deeply do the Tau believe in the Greater Good, that even their Drones are programmed with self-preservation protocols. In the face of what the AI deems to be hopeless odds, a Drone will attempt to escape rather than stand and fight. While in certain extreme circumstances Drones might be deployed on high-risk missions likely to lead to their destruction or purposefully moved to block enemy advances on units of Fire Warriors, the Tau do not consider Drones to be disposable units and the Drone artificial intelligence will analyse every possibility in order to ensure its own survival. 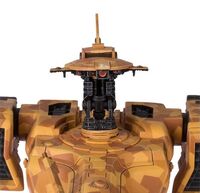 A Recon Drone with its Burst Cannon folded away and being fitted into a Devilfish transport's cupola
Add a photo to this gallery
Retrieved from "https://warhammer40k.fandom.com/wiki/Recon_Drone?oldid=257439"
Community content is available under CC-BY-SA unless otherwise noted.