The Reavers of Commorragh are those Drukhari fascinated by bringing death to others at high speeds. They ride to war upon the most streamlined and pared-down of all Aeldari skycraft -- the Aeldari Jetbike, the perfect fusion of motion and lethal power.

The Aeldari experience sensations and emotions to a far greater degree than any other sentient species and their psyches are given over too easily to obsession. Reavers, having first gotten a taste for high-speed violence during raids into realspace, are those Drukhari consumed with achieving the maximum-impact kill.

It is not enough for them to simply carry out acts of mayhem and murder or to soar through the air at overwhelming speeds. These savage sadists must accomplish both at once to have their vile obsession truly sated.

When they accomplish a well-placed and mortal blow delivered at an obscene rate of speed, they feel that spike of pure joy that Reavers consider the ultimate thrill in life.

In the toroid racing arenas that girdle the highest spires of the Dark City, the Reavers duel amongst themselves for supremacy. These vain and mortally-competitive riders engage in death races each night, their Jetbikes screaming around each arena in a high-stakes battle that brings screams of ecstasy from the bloodthirsty crowd of spectators.

No quarter is ever asked for or given in these races, for to come in last is literally a death sentence. Reavers will pull every trick they can on the back of a Jetbike to secure even a fraction of a second's advantage over their competitors.

The arena champions endlessly modify their craft's vanes and blast-engines, install targeting holograms for their Jetbike's built-in weapons, pierce their craft's fairings so that the shriek of the air created by their passing is of a pitch that distinguishes them from their peers and wear flexible suits akin to "second skins" to eliminate air resistance.

Reavers, like many Drukhari warriors, use artificial narcotic stimulants to enhance their performance and capacity for sensation in the death races or in combat. They are cheats and liars like so many of their kin, and give respect only to those who can pull of an "elegant kill."

It is considered improper to simply maim a fellow rider during the death races, while a well-executed decapitation while riding inverted can bring a smile even to the frozen face of the most jaded Kabal archon. Because of this no-holds-barred approach, weapons are extensively employed during the death races in the most prestigious of the toroid arenas.

The most infamous and celebrated Reavers employ underslung Grav-talons to push their rivals into the artfully bladed contours of the arena's walls, or release clusters of proximity-sensing anti-gravitic caltrops that detonate in spectacular chain explosions behind them to the crowd's applause.

Reavers are so attuned to their beloved Jetbike steeds that in combat on a realspace raid they will use them as if they were extensions of their own bodies. Though a Reaver Jetbike usually incorporates a Splinter Rifle, the craft itself is the rider's most favoured weapon.

Reavers pilot their Jetbikes with such uncanny precision that they can take off a head or even slash open a throat with a single pass of their finely-sharpened keels.

A favorite tactic is to dive down from the clouds, corkscrewing the craft so that the razored edges of its blade-vanes dismember those unfortunate enough to be caught in the pass or rip through them head-on.

The most skilled of Reavers are those who have consistently proven the victors in the nightly toroid arena death races of the Dark City.

During Drukhari realspace raids which make use of Reaver squads, they are often led by an Arena Champion who possesses enhanced wargear and represents the pinnacle of the already preternatural Reaver skill with a Jetbike.

Compared to the high-speed opponents they are used to facing, most soldiers from the lesser races seem slow and lumbering. Reavers will always find ways to add excitement to the combat, however, often competing with one another to see who can achieve the swiftest or most spectacular kill. 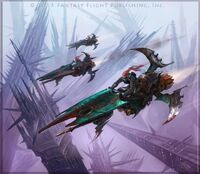 A group of Reavers roaming the wastes of the Dark City
Add a photo to this gallery
Retrieved from "https://warhammer40k.fandom.com/wiki/Reavers_(Drukhari)?oldid=363392"
Community content is available under CC-BY-SA unless otherwise noted.