Reaver Attack Squads were specialised units utilised exclusively by the Sons of Horus Space Marine Legion during the Great Crusade and Horus Heresy in the late 30th and early 31st Millennia. Reaver Attack Squads were an evolution of the Despoiler and Assault Squads found in the order of battle of the Luna Wolves, the Reaver squads in many ways epitomised the Sons of Horus' way of warfare. Heavily influenced by the tactics of the seething and incessant tribal warfare of Cthonia, Reaver units specialised in lightning-swift assaults which maimed and disabled a foe, striking down leaders, mercilessly cutting down any who were weak or isolated, and sowing panic and disorder in any who remained. Vicious and adaptable, Reaver Squads could fight equally well in multiple theatres of warfare, from void-based boarding actions, to battlefield shock-assaults, to hit-and-run raids and scouring operations.

Each Reaver unit, whether a single squad or an entire company in strength, was effectively a warband in its own right, and its warriors fought more as individuals than regimented soldiers. Idiosyncratic both in appearance and wargear, it strove to make its own name and reputation. Of the Reaver units in the XVIth Legion, the Catulan Reaver Squads of the elite 1st Company were the most infamous during the early battles of the Horus Heresy and were active during the battles at both Istvaan III and Istvaan V, but there were many more. As the war progressed and the influence of Chaos became stronger upon the XVIth Legion, the Reaver Squad pattern became more commonplace in the Sons of Horus, displacing more regimented formations as new units were formed. Accordingly, they were favoured with the finest arms and wargear that the Warmaster could provide.

A Reaver Attack Squad was usually comprised of 4-10 Reavers and led by 1 officer with the title of Reaver Chieftain. They had access to a variety of the best wargear within the XVI Legion, including: 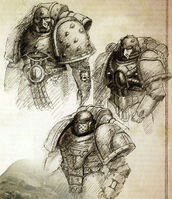 Ancient Remembrancer depictions of a Sons of Horus Reaver Attack Squad Legionaries. Reaver units made extensive use of prototype and sub-pattern wargear and power armour, manufacture and origin unknown. 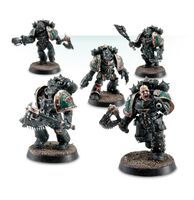 Sons of Horus Reaver Attack Squad
Add a photo to this gallery
Retrieved from "https://warhammer40k.fandom.com/wiki/Reaver_Attack_Squad?oldid=296041"
Community content is available under CC-BY-SA unless otherwise noted.