The Reaper Chainfist is a Chain Weapon used by the combat walkers of the Questor Imperialis, the Imperial Knights, and the Renegade Knights of the Questor Traitoris. These weapons are used only by the Cerastus Knight-Acheron. Usually carried on the Knight's right weapon arm, the Reaper Chainfist is employed alongside the Acheron's Acheron-Pattern Flame Cannons as a weapon of extermination used to inspire fear in the foe.

The Reaper Chainfist is actually a set of two Chain Weapons linked together, with each one spinning in opposite directions. The blades are capable of tearing through both armour and fortified walls with ease. The weapon also features a built-in set of twin-linked Heavy Bolters to be used against infantry when the Knight needs to conserve fuel for its Flame Cannon. 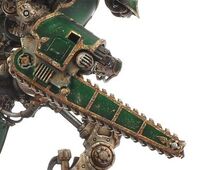 A reaper Chainfist as seen from the side
Add a photo to this gallery
Retrieved from "https://warhammer40k.fandom.com/wiki/Reaper_Chainfist?oldid=314684"
Community content is available under CC-BY-SA unless otherwise noted.