An AX3 Razorshark Strike Fighter is a Tau aircraft designed to fulfil both the roles of ground attack craft and air-superiority fighter. To the Fire Warriors forming the front ranks of a Fire Caste firing line, there are few sights more gratifying than seeing a Razorshark Strike Fighter swoop out of the cloud cover and streak over enemy formations.

Built along a design pattern modified from the Sun Shark bomber, the Razorshark forgoes the wing-mounted Interceptor Drones in favour of additional manoeuvring thrusters, and it trades the Pulse Bomb Generator for a fearsome Quad Ion Turret. A formidable weapon, the Quad Ion Turret is ideal for turning light vehicles into twisted wrecks. Although firing the weapon in its overcharged mode makes it slightly unstable, the Quad Ion Turret can then produce a blast with an enormous radius that consumes entire squads with a single shot.

First designed and deployed sometime between the Second and Third Sphere of Expansion, the AX3 Razorshark fighter has proven its success repeatedly against the many foes of the Tau Empire.

During the Tyranid Hive Fleet Gorgon’s invasion on the Tau Sept homeworld of Ke'lshan, the aliens quickly grew wary of dominating Tau air attacks. High in the stratosphere, super-heavy Mantas blasted away flying terrors, while just above the planet's surface swept Sun Shark bombers, their Pulse Bombs breaking up the swarming Hormagaunt assaults. Whilst the Tau's entire aerial arsenal played a part, it was the Razorshark Strike Fighter squadrons that took the highest toll on their foe. Streaking back and forth over the battlefront, the Razorsharks relentlessly targeted Tyranid Warrior synapse creatures; the beams from their Quad Ion Turrets easily penetrating the Tyranids' thick, chitinous armour. After a single Razorshark squadron's attack run, entire squads of the elite alien warriors would be left in ruin, their half-melted bodies continuing to sizzle long after their deaths. A fast moving aircraft, the Razorshark was able to seek out and destroy the brains of the invasion -- whether they attempted to lurk far behind the front lines, or chose to surround themselves with intervening lesser creatures, the Razorshark was manoeuvrable enough to hunt them down. When Tyranid infiltrators such as Lictors or Raveners emerged to threaten the Fire Warrior battlelines, Razorsharks would swiftly fly back to target the beasts, minimising both the harm and the distraction of such attacks.

During the battle of Do'saro, the courageous pilots of the "Blazing Star" Air Caste Support Cadre engaged a flock of screeching, leather-winged Tyranid beasts before diving through and using their overcharged Quad Ion Turrets to obliterate the Hive Tyrant that led the swarm.

Traditionally, the finest Razorshark pilots hail from the hardy folk of the Tash'var Sept. Faced by constant Ork pirate raids, the Air Caste of Tash'var have become experts in both shooting down the ramshackle jets of their green-skinned foes and obliterating their massed infantry from high.

Built along a design pattern modified from the plan of the Sun Shark bomber, the AX3 Razorshark consists of a central airframe with two large forward-mounted wings, which are connected to additional small winglets to the rear of the main body by thruster rods. A Razorshark’s cockpit is fully enclosed and pressurised, and its sleek design forgoes the Interceptor Drones built into specially designed recesses in the wings of a Sun Shark for additional jet thrusters. This provides the aircraft with an additional degree of manoeuvrability. A Razorshark also forgoes a Sun Shark's underslung Pulse Bomb Generator for a fearsome Quad Ion Turret to better suit its ground attack role.

A Razorshark is powered by complex dual anti-gravitic and jet-propulsion motive systems so that the aircraft can swiftly fly over a planet’s surface. Its armoured bulk is primarily driven forwards by its two powerful jet engines mounted on the sides of the main airframe. Additional thruster rods connected to the wings allow the aircraft to turn better than it would otherwise be able too, whilst its large wings grant it better stability in the air. Because of a Razorshark’s additional thrusters mounted in the wings, the fighter can manoeuvre with a skill, precision and extremity that only members of the Air Caste can tolerate.

Mounted on the front of the central body of a Razorshark is a nose-turret, which can be fitted with either a Burst Cannon or a Missile Pod. The armour of the vehicle is made from a dense nano-crystalline metal, named Fio'tak in the Tau Lexicon, that is light, malleable, strong and corrosive resistant, reducing the weight of the vehicle whilst also providing excellent protection. All Razorsharks are piloted by an Air Caste pilot, as evident by the Air Caste symbols reflected on each of a fighter's wings -- their positioning symbolic of the time-atrophied wings that grow form the shoulders of Air Caste Tau. The pilot controls the flight of the aircraft and also operates its weapons, with the assistance of some Drone-controlled systems.

A Razorshark can be likened to a mobile weapons platform that is capable of great speed and manoeuvrability. Using its jet-thrusters and powerful anti-gravitic engines, a Razorshark is a potent asset for Fire Caste ground forces. Although as part of the Razorshark’s Joint Strike Fighter role classification it can engage enemy flyers effectively, the aircraft was originally purpose-built as a ground support attack craft, a role in which it excels. Its success is evident from the aircraft's ever-growing popularity with the Fire Warriors that it flies above.

The Tau doctrine of war places great importance upon dominating the airways above any battlefield they deploy to. It is their commonly-held belief that controlling the skies is the first step in winning the engagement, and Tau aircraft such as the Razorshark and Barracuda enable this. By making the elimination of enemy flyers a priority, ground troops are allowed to concentrate on their targets without having to concern themselves with any threat from above. This strategy thereby enables the Tau to make full use of their mobile ground support assets. With no enemy flyers to worry about, the Sun Shark shoals are better able to line up their devastating bombing runs while Razorsharks fly circles around enemy infantry or armour, using the range and potent hitting power of their ion weapons to pick off foes from beyond the range of most return fire. With full aerial supremacy, the Tau are free to concentrate their flexible firepower when and how they need to -- efficiently isolating and destroying enemy assets one by one. In the hands of an experienced Tau Commander, the fine-tuned coordination of air attacks in the skies above the battlefield can make a Hunter Cadre very adaptable and extremely lethal.

During an attack run, Razorsharks are a blur of motion, and the crew are more likely to trust their speed and jinking ability over any amount of armour. Using their extreme speed, Razorsharks will attempt to manoeuvre so as to target enemy vehicles in their more vulnerable sides and rear. This can be done simply by performing a flyover past the vehicle, as its rear turret can then simply swivel around and open fire. Often called in as air support by Tau Commanders to strafe enemy positions and target key targets that would otherwise be unreachable, Razorsharks support Tau ground forces by providing much needed precision firepower from the air. It is of note that Razorsharks are also capable of operating in space, and often fulfill the role of an Attack Craft for Tau fleets in void combat.

An AX3 Razorshark's primary weapon is its rear Quad Ion Turret mounted on a gimbal joint, which is ideal for turning light vehicles into twisted wrecks. Essentially a linked battery of four Ion Rifles, their rapid-firing nature allows them to cut down swathes of infantry and enemy aircraft alike with ease. However, the Quad Ion Turret can also be fired in an overcharged mode, which, whilst making the weapon slightly unstable and causing the aircraft to run the risk of dangerous energy feedback, can then produce an enormous blast that can consume entire squads or vehicle squadrons in a single shot. In addition to its main armament, each Razorshark is loaded out with a nose-mounted weapon primarily used for air defence. This weapon is usually a Burst Cannon, which can be used to strafe both the skies and the ground with pulse fire. However, a Razorshark can be upgraded to replace the Burst Cannon with a Missile Pod, allowing the fighter to more effectively engage light armoured vehicles and heavy fliers. For further support, a Razorshark also carries two Seeker Missiles in two cunningly hidden recesses in the aircraft’s hull. These missiles can be auto-fired by the Razorshark's Air Caste pilot himself, but are more effective when launched by a ground unit that has painted the target with a Marker Light. Seeker Missiles mounted on Razorsharks are especially deadly, as the aircrafts ability to rapidly position themselves on the flanks of a battlefield allows the missiles to strike at more vulnerable side or rear armour of enemy vehicles.

Razorsharks can also be equipped with any of the following Tau vehicle support systems: 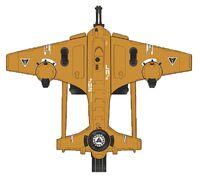 Dorsal schematic of an AX3 Razorshark strike fighter
Add a photo to this gallery
Retrieved from "https://warhammer40k.fandom.com/wiki/Razorshark?oldid=322219"
Community content is available under CC-BY-SA unless otherwise noted.